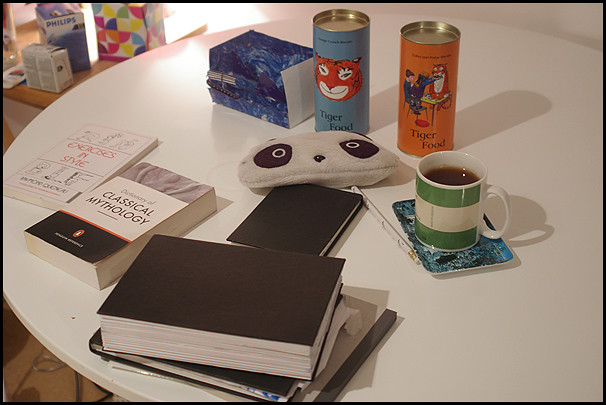 Day in My Life- 10th January

10th of January for the Document a Day project. I mostly waited at home for a parcel of birthday presents sent by my dad and did some uni stuff and tidying. Not the most exciting of days.

Wake up. Marcos was up at 7 to go to work. I was a total zombie then and could just about manage a hug and a kiss before falling asleep again.

Out of focus obligatory bedhead photo. My brain is not up to such concepts as focusing the camera right now.

This dressing gown- best 50p I ever spent (charity shop in Seaford, charity shops in towns full of old people always seem to have good stuff). The place is a bit messy. We only moved in a few weeks ago, and only literally a week before got stuff like shelves for dvds and drawers for the desk and there’s still stuff that needs putting away.

I ate loads of heavy food late the previous night, and my stomach just groans and goes “please! give me some time off” so I ended up just having some tea and ginger nuts instead. Probably not the healthiest option.

I continue re-reading this, one of my favourites, while I dunk the biscuits in the tea.

I check my email. Nothing exciting has happened. I wish I was stupidly rich enough to afford this Andy Warhol cushion though.

I attempt to call the dole office to sign off, because I have some more tutoring work, but I get put through to about 4 different people, none of whom know what to do, and the local job centre is just engaged all the time. Useless sods.

I read the Grauniad online. They do like a bit of righteous outrage. The Duracell bunny has a seriously creepy expression there.

In an idle moment I download some more camera filters.

A parcel with a book I want for uni arrives. I hate non-reusable parcel packaging.

I loved this book when I was a kid.

Illustrations. Which is what I wanted it for. I remembered them being colour though.

A quick check of the British Library website reveals this is the only version though.

The kitchen is messy. Let’s fix that.

Washing up done. The penguin is a cocktail shaker. You’ll be seeing him later.

I made some soup out of leftover vegetables last night. It hasn’t turned out well though. It looks like dishwater and smells like old vegetable peelings. Down the sink with you. In future I’ll stick to onion soup.

I got sent a link to this artist. He’s incredible. He pours in layers of resin into containers, and then painstakingly paints each layer so that when the resin reaches the top it looks like there are 3d objects in the plastic. You should watch it.

I live on the boundary of two boroughs. I joined the library right by my house, but it’s just a small local place, and a lot of their books are aimed at old ladies. To go to the bigger library nearby I have to apply for another card, because it’s a different borough. Annoying.

I stick the radio on. 6 Music is pretty much the only reason I own a DAB radio. I plan to do some tidying, and I’m not doing it in silence.

Messy. I can’t wait until we can afford to replace those white covers on the sofa and armchair. The fabric is cheap and it stains really easily.

Moominmamma is returned to her rightful place.

I decide to crack on with fixing my bedspread while I’m hanging around. I know the second I jump in the shower the parcel will arrive.

I still don’t feel hungry, so I just have some juice. I checked my prize number. All I won was a 50p off voucher for some soup. I don’t even like that company’s soup.

My nan made this bedspread by hand. The patchwork area was sewn onto the main body with really tiny little invisible stitches in cotton thread. It looked immaculate, but wasn’t very sturdy, and the patchwork is coming off.

Having a rest. I had fixed the whole of one side the night before. I found it very tedious sewing the hexagons on (in not so perfect tiny stitches, but a little more strongly), so I don’t think I’ll be taking up patchwork as a hobby any time soon.

Pin cushion. It was meant to be a grey pumpkin (after a terrifying kids book called Knock Three Times I had where the villain was a grey pumpkin pin cushion) but it doesn’t really look it.

At last, my dad’s parcel arrives.

Gah! Why did Amazon use such a huge box?

This is what I got. Puffin is the children’s dept of Penguin. I don’t know if they’re so well known in other countries.

And these editions of Arthur Ransome’s books.

On the radio Steve Lamacq drew a letter and number at random (f 6 in this case) and asked people to text in the album in their collection that was that number position under that letter, and then he’d play some of his favourites. This was mine. I wondered why it didn’t work, until I realised I’d missed a digit off the number. I don’t know if they ended up playing my selection though.

Shower, pill and vitamin time. I somehow forgot to take a photo of clothes or anything. I was wearing a black coduroy skirt, black and grey striped top and purple ballet cardigan anyway.

I started feeling really hungry, so I decided to pop out and get something quick and drop off my dole book in person at the job centre. I really love these shoes, but they’re pretty crappy quality. The space invader shoes belong to Marcos.

I forgot to take any photos on the way out, cos I was in a hurry.

Our building is strange. It’s all mock Tudor, but is triangular.

Me in my coat in the mirror in the lobby.

Stairway (to heaven). There is a lift, but it’s incredibly claustrophobic. The safety notice says “no more than 4 people” but I can’t actually imagine how you’d even fit 4 in. 2 is uncomfortable enough. Anyway I prefer to take the stairs.

Save me from the dairy.

Mr Ugly Onion in the kitchen. He’s far too small to actually be of any use storing onions (maybe one very small onion), but I love him anyway and use him for loose change.

I should really crack on with some uni stuff. I choose some music to accompany it.

In the end I choose Do Make Say Think. It’s not too distracting.

Planning out stuff for animation project.

Do Make Say Think finish and I stick on Wild Nothing.

(Deleted- face of an arsehole)

This was a Christmas present that he had delivered to the office. It arrived late and he kept forgetting to bring it home until today. I love Ottolenghi’s recipes.

Tea making. Chamomile and honey for Marcos. Lapsang Souchong for me.We both have work to be getting on with.

I print off some inspiration pictures.

I cook a curry quickly.

And drink some yakult, because I forgot in the morning.

Served with chappatis. Food with sauces is so hard to photograph.

We watched an old QI while eating.

After eating I found some leftover chocolate orange from xmas.

Marcos had some chocolate almonds his parents had sent us a few days before in a parcel of Spanish goodies.

Then we watched Poirot. (Halloween Party was the mystery.

Whisky and ginger. If you’re wondering why we used such fancy whisky for a mixed drink, the bottle cracked when we were moving house, and it had to be drunk up really quickly before it evaporated.

About midnight we went to bed. Marcos was exhausted.