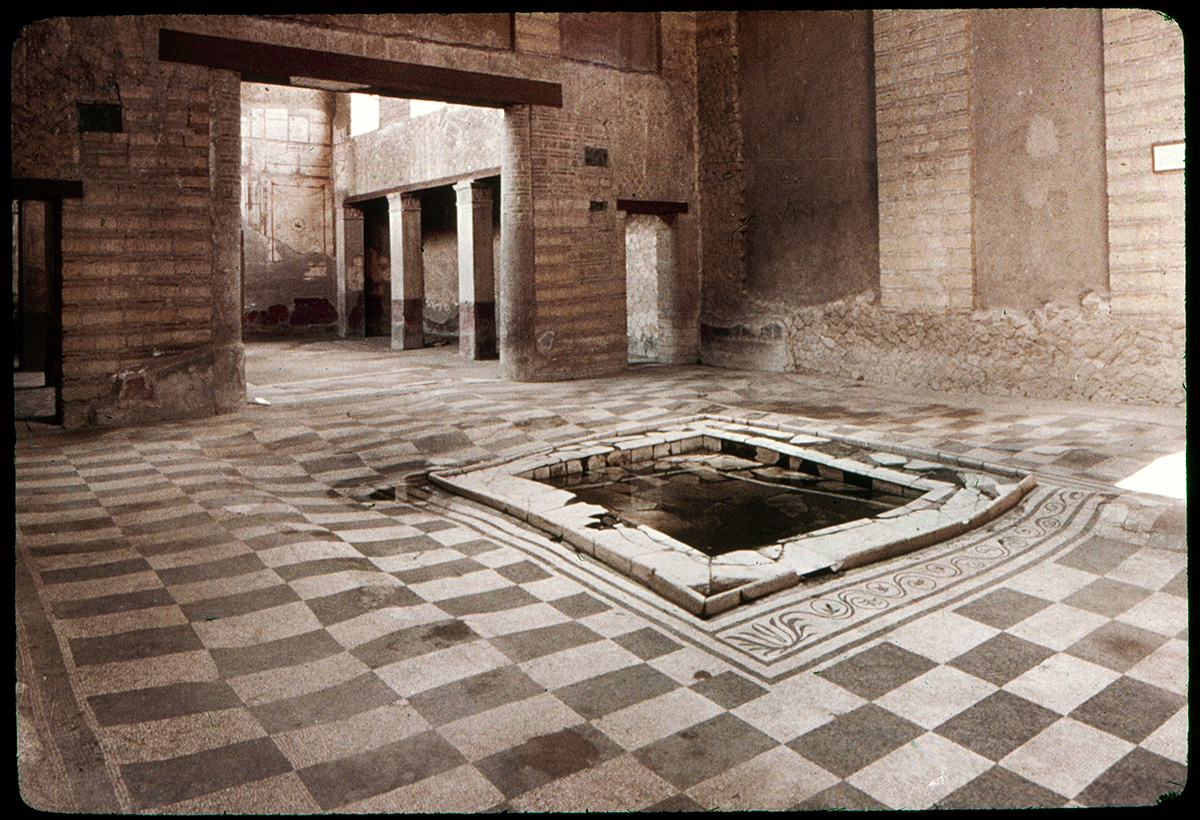 When clearing out my grandparents’ house a couple of years ago I found seven packets of these 60s tourist slides of various places around the Mediterranean. I’ve been scanning and restoring them. First up, these from Herculaneum.

Herculaneum is a smaller coastal town near Pompeii that was also destroyed by the volcano. It’s not as well known, but there are some magnificent villas there in a similar but smaller archaeological park to the one you can visit at Pompeii. Some of the site is also covered over by the modern town of Ercolano, unlike Pompeii. (A strange by-product of studying Classics is that you end up knowing a lot about small towns in Campania).

Since the era of good-quality smartphone cameras, people don’t realise just how much calculation and technical help is going on in the background to give them better images. In the 60s you had to know what you were doing with exposures, lenses and film to get good photos, so there was a big market in these packets of slides for tourists. Why take your own incompetent photos when you could buy a packet of professional ones.

They hadn’t quite nailed the formula for consumer colour film in that era though, so over the years the blues and greens fade out, leaving everything pink and orange. Sometimes the slides look really surreal and cool in those colours, but mostly they just look muddy, so I’ve colour corrected them in Photoshop. I considered just selecting a few, but there’s only 36 images in the pack, so I’ll post them all with the info from the slides about what they are. Many of the houses have been given names by archaeologists based on the decoration inside.

After the colours are restored to the original- the central hall (atrium) of a richer house. The walls would originally have had plaster and murals

The palaestra– the outside area of the public gym for practicing sports like boxing and wrestling. This was one of the slides in the worst condition.

Remnants of murals in a shrine dedicated to Emperor Augustus. At the time of the explosion, Titus had just become Emperor after his father Vespasian died of diarrhea. Titus himself dies two years later from illness to be replaced with his deeply unpopular brother Domitian. So unpopular he was the last member of his dynasty.

Statues from the “House of the Deer”

Faded wall murals from the dining room of the House of the Deer. These people had money. Poor Romans lived in flats and ate at takeaways and pubs. Three or more couches with cushions would have been arranged around central low tables (hence triclinium for dining room in Latin). For entertaining, food would be served as finger style canapes, eaten relaxing on the sofas. Eating sitting up at a table was a sign you were in a rush and nobody important.

Dining room mosaics at the “House of Neptune”. Romans prioritised the decorating budget in the dining room because that’s where guests spend most of their time.

Street view. Roman houses were designed to look deliberately boring outside, to discourage robbers and to keep the heat out. Light came in via the central courtyard. You can still see plenty of houses in the same design in Morocco.

More expensive statuary at the House of the Deer. I’ve cleaned up all the other green dye stains from the slides, but I left this one because it made me laugh.

Courtyard in the House of the Frieze of Telephus

The dining room at the House of Neptune again.

Terrace at the House of the Deer

Entrance to the public gym

Tablinum- a home office. Often decorated with sculptures or paintings of family members. This is where business visitors were taken for meetings.

Statue of Eros aka Cupid.

Another fancy peristyle garden. In some of the houses in Pompeii they’ve tested the soil and replanted the same plants as would have been growing in 79 AD in the garden.

Women’s changing rooms at the baths. You could pay someone to keep an eye on your stuff on those shelves. In Bath, there was a tradition of writing curses on pieces of lead and throwing them into the holy spring to come true. Archaeologists have fished out a lot cursing people who stole their clothes from the changing rooms.

Another grand courtyard. The roof was open in the centre and the pool would fill with rainwater. Some houses had a fountain here. That alcove would have a shrine to the household spirits and ancestors.

Wall murals at the baths. Most free Romans went every day – it was cheap and often politicians would try to buy votes by sponsoring free entry days. There was usually swimming, steam rooms, hot tubs, sauna and massages available (along with er, other services).

Grand peristyle garden at the House of Argus – one of the biggest villas in the town. When the remains were originally discovered in the 1820s the upstairs balcony was still in place, but it’s since fallen down.

Another street view, with a reconstructed upper floor on one of the houses. Most of these houses would have had a doorman, probably with a dog.

Pergola area in the garden of the House of the Deer

Hall of the house of the Frieze of Telephus – originally this would have had a roof (with an opening to let the water and light in).

Satyr statue from the House of the Deer. Look at his leopard skin cloak and goatskin bag of wine. He’s ready to party.

Another ruined hall- you can see the size of the house from outside. This was probably the most damaged slide.

The caldarium – the hot room at the baths.  The usual order was to relax in the warm room, then cover yourself in olive oil and have a good sweat in the hot room, and scrape the dirty oil off taking the muck from your skin before having a refreshing plunge in the cold pool or a swim in the swimming pool. (Repeat as you like)

Central courtyard of a house with more of the upper level surviving. Roman bedrooms (cubiculum) were usually small and sparsely decorated. Decorating budget was saved for public rooms downstairs.

Women’s hot room at the baths. These baths had separate men and women’s facilities, but after the first century AD many were mixed.

Street of grand villas. Again it’s all on the inside.

Street fountain and remains of some shops and workshops. There were public wells and fountains fed from the aquaducts for everyone to use, and richer people had home plumbing. Unfortunately a lot of the pipes were made of lead.

Patio view of the House of the Deer – this is one of my favourite slides.

Snake sculpture at the gym.

A thermopolium – a Roman takeaway – this is where ordinary people would get meals. The holes are storage jars. Lots of mulled wine, lentil and chickpea dishes, baked cheeses, and a dish similar to pizza on the menu. With plenty of garum– fish sauce to drizzle over everything (it’s pretty much identical to modern Thai fish sauce). No tomato, no peppers, no citrus or potatoes though, those were yet to come. Poor people didn’t eat much meat, it was expensive. A good source was sacrifices at temples if they could get it. Conveniently the bit the gods liked from sacrificed animals was the gristle and bones, leaving the congregation free to eat the rest.