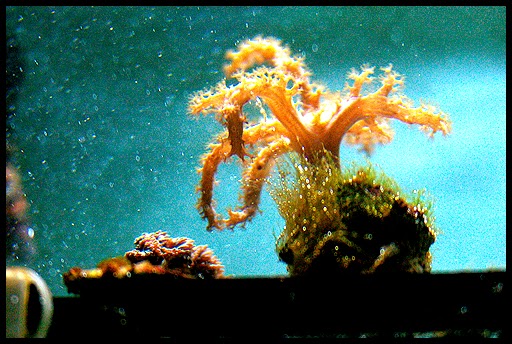 Louise, a friend of mine from Brighton recently set up a creative writing website. The idea is that everyone is given a monthly writing prompt, with all the submitted work posted the following month for comment. I decided to have a try following the first prompt- the theme was Aquamarine. I couldn’t really think of any idea for a story, so I just wrote what came to mind. What they call a five finger excercise. I think I’ll ramble less on the next one. Here is what I wrote . .

I used to go to the aquarium when I was stressed or angry or just plain bored. I had acquired a year’s pass in slightly strange circumstances. At the time I worked at a language school. The owner had taught for a measly three months and then decided to open his own school (language schools are almost entirely unregulated). He had also done some kind of bullshit online counselling course, and felt himself to be some kind of life-coaching guru. When confronted with anything practical he would beam at you, spout some trite self-help book maxim, and try to disappear as swiftly into his office as possible.

His academic input was limited to trying to persuade everyone to include 15 minute sessions in their classes for sharing feelings. He was later to disappear with all the money. The so-called academic manager limited herself to administrating registers and moving students into inappropriate classes. If you asked her any questions about teaching she’d say “I don’t know” very slowly and look at you as blankly as possible until you went away and stopped asking her anything. One day she asked me if I wanted to go to an educational talk at the aquarium after work. I said yes, because it was a free trip. When I got there it turned out to be a sales talk for managers of language schools to send their students on trips to the aquarium at discount rates. It was a little awkward, me being there but not being the manager, and I tried to avoid answering too many questions in case they asked me to leave, but everyone got given a free year-long ticket at the end, so it was worth the slight discomfort.

Before that, I had been quite into aquarium-keeping myself. I had two tanks, one large cold one with fancy goldfish in, and a smaller tropical one with a lovely blue betta splendens in (who ate the most disgusting looking dried bloodworms). I was diligent about testing and changing the water, keeping the temperatures right, and dosing the fish up with salt and methylene blue when they looked peaky. There is something very satisfying about keeping an aquarium well. You are creating a whole mini ecosystem. Goldfish in particular create a lot of waste, and you need to strike the correct balance to cultivate the plants and the bacteria in the gravel which deal with the poisonous ammonia and nitrites the fish produce, but also while not encouraging algae to grow. Filters and water changes can only do so much. You don’t provide the very air for other pets, fish are totally dependent on you creating the right environment for their survival. Maybe all people who keep aquariums are secretly megalomaniacs in some small way.

One of the goldfish, Roger, was also a little hyperactive, and had a tendency to get pieces of gravel stuck in his mouth and then zoom around the tank hitting his head against the glass in a panicked attempt to get it out. You had to fish him out, wrap him up in a wet jay cloth and squeeze him gently until the gravel popped out. If you wrap fish in a wet cloth they don’t realise they are out of water and don’t flap or panic. I don’t know if that confirms the popular stereotypes about the intelligence of goldfish or not. If you take them out of the water in this way, you have a minute or two before they suffocate. Keeping goldfish obviously requires nerves of steel. Luckily the gravel always came out very easily, and Roger lived to tell the tale.

Despite all these gravel-related emergencies, he survived all his tank-mates, and lived to a grand age of 6. By the time I got the aquarium ticket though, Roger and the others had all been dead for six months. I had kept the tank for a little while, but my heart wasn’t in replacing them. I kept the gravel wet, and gave it away while it was still good cultivated gravel full of helpful bacteria. I’m not sure there is any other hobby where plastic bags of wet slimy gravel are a prized gift. I miss having an aquarium, but in the last few years I have moved too often. Aquariums don’t like being emptied and moved, it disrupts the environment in them too much.

Even before that, when I was a kid, I was very into collecting frog spawn from ponds, and letting it hatch in a jar and releasing the resulting tadpoles back into the pond. Sometimes you got lucky and found newt spawn instead, which was even better. Newt spawn comes in individual eggs on plants, rather than in clumps. The tadpoles were even more exciting than the frog ones, being larger and with fluffy external gills. I wasn’t really sure if I wanted to be a spy, an archaeologist, an explorer or a biologist in the future, but I hoped it would be possible to combine all of those, and also to keep on collecting frog spawn. Like some sort of cross between Gerald Durrell and Indiana Jones, and preferably communicating using secret codes.

Unfortunately as an adult, I was not exploring uncharted territories, collecting zoological specimens or uncovering government secrets; I was teaching at a badly run language school. I had good students, and there was satisfaction in creating classes, but the atmosphere behind the scenes was fairly toxic. After a bad day it was a relief to go around the calm, soothing aquarium.

This particular aquarium is apparently the oldest extant one in the world. There is a long Victorian gallery with various tanks with things like lion fish and eels and displays about how to grow coral in, and a shallow pool in the centre with manta rays. When I was a kid they used to allow you to pet the rays, but this isn’t allowed any more because it was stressful for the fish (fish are covered with a protective layer of mucus which is rubbed off by touch and leads to skin problems if removed), but they still allow you to feed them. In the next room is a big pool with seating and a tunnel through the centre. In the past this was a dolphinarium, with dolphins cooped up in an unsuitable tank and taught to perform tricks. After a long-running campaign though, the dolphins were removed in 1990, and now there are smaller, more suitable creatures such as dogfish in there, and also two large turtles who are unsuitable for release back into the wild, and who are fed with lettuces on fishing rods.

My two favourite things however were the Amazon rainforest display, and the cephalopods. There was a maze constructed from mirrors and plants, with backlit tanks set in with various amazonian creatures such as piranhas and poison arrow frogs. Piranhas look like they are made of bronze coloured sequins when they’re lit up. One of my favourite things about the branch of Foyle’s bookshop on Charing Cross Road is that they have a large tank of piranhas in the children’s section, for no apparent reason other than why not. We also had an Amazon Trail computer game at school. I wasn’t much good at it, my people always died as horribly as in the Oregon edition, just of ingesting something poisonous rather than dysentery. I don’t know if I would be much good in the actual Amazon, I’m not great with high humidity. I’m sure 7 year old me would be very disappointed. Of course imagining being an explorer is much more comfortable than the reality.

The octopuses and the squid (yes, octopuses, it’s not latin, and there is no way in hell I’m ever going to say octopodes or octopodia) had their own little section, where they lived in tanks filled with amphorae. The large octopus liked to play with lego. I could stand and watch it for ages. There was also a cuttlefish which would obligingly change colour, and large tank filled with clouds of jellyfish. About 12 years ago, Yo La Tengo created an instrumental soundtrack for some nature documentaries of the sea, which was performed live at showings of the film and also recorded as the Sounds of the Sounds of Science. There is one track called How Some Jellyfish Are Born that is incredibly hypnotic, and one of my favourite pieces of music. (I also recently went to see them doing something similar for a film about Buckminster Fuller, and it is one of the best things I’ve ever been to)

The Natural History Museum in London has a giant squid preserved in a tank of formaldehyde, but it’s out the back because they don’t have enough floor space to display it, so you have to ask to see it at reception. One thing I would also love to see would be a deep sea aquarium, with a dark tank with pressurised water, and all the bioluminescent fish found at deep levels (which are very hard to bring to the surface alive, because they tend to die of the bends or exploded swim bladders). Apparently this doesn’t exist at the moment though, but Monterey Aquarium in the US is working on it. I’ll have to stick to watching the deep ocean on tv until they invent it.

I took my then boyfriend to the aquarium a few times. He lived about 2 hours away. We didn’t see much of each other by that point for various reasons, but it seemed a shame to split up. He was utterly enchanted by the turtles. If it was possible I think he would have slipped one into his bag to take home. I have a lovely picture of him grinning at some terrapins like they’re his firstborn. If he wasn’t visiting though, I generally preferred to go alone. I think I regarded it as my place, and company would have been weird. I stopped working at the stressful language school after a certain point, and went back to university for a change of direction. My ticket expired at about the point I moved away. I haven’t been back since. I probably should.