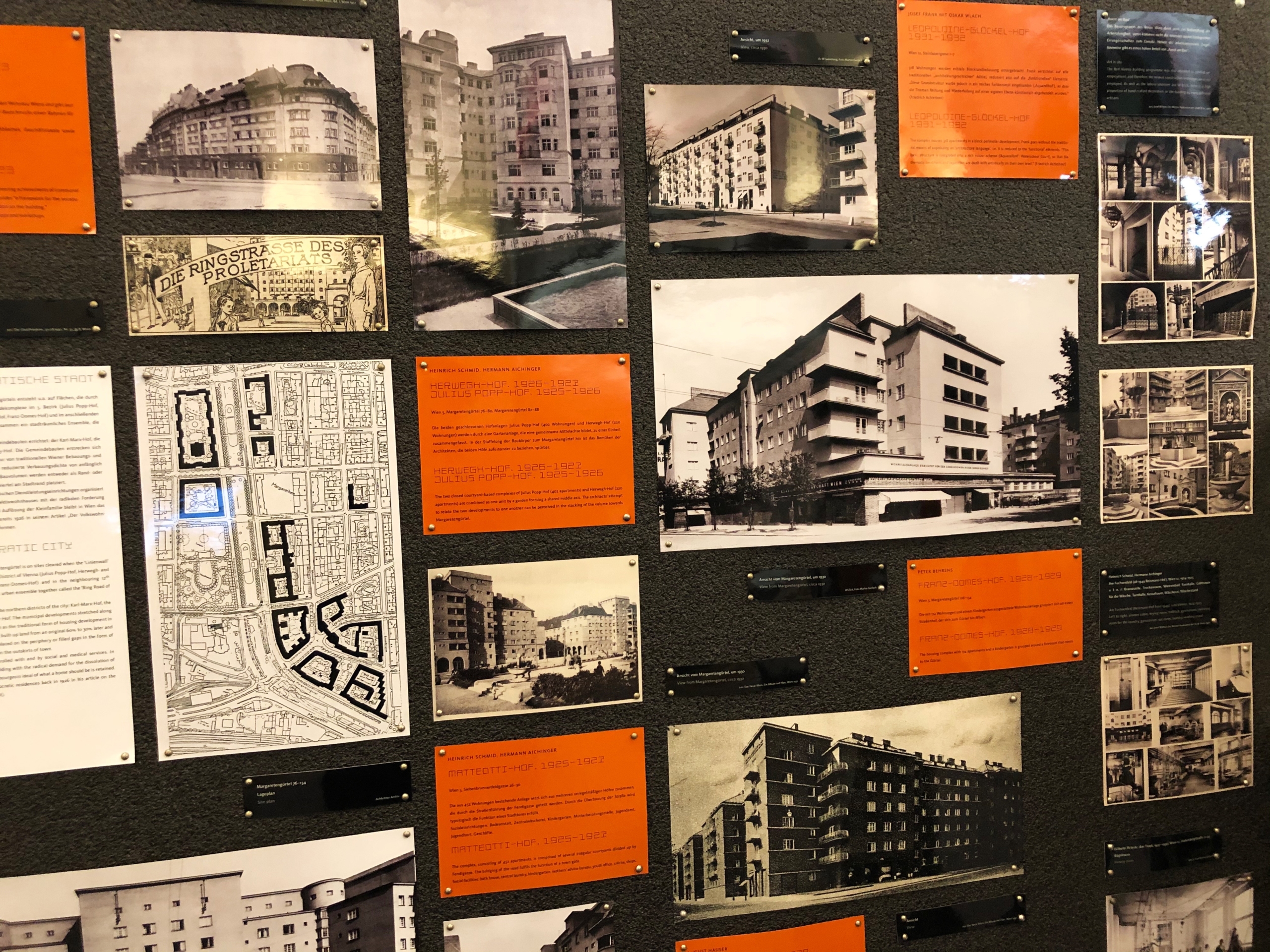 I also visited Vienna Architecture Centre- I’d never been inside this small museum before, but the entry was thrown in free with the bundle ticket I bought for the other exhibitions.

Comparison of city populations in 1900.

Luxury flat interior, 1905 but looking extremely 60s. I liked the exhibition style of lots of photos pinned to a board.

Plan for a new 22nd district of Vienna. It was never built. In fact a lot of the area is only really being developed lately (Aspern and Seestadt) and looks completely different- the standard style of modern flats and shops with glass and wooden surface areas that’s popular at the moment

Art Nouveau church. I forgot to photograph the caption, but I think it was destroyed in the Second World War.

Assorted buildings from the “Red Vienna” era of the 1920s. The council built large amounts of public housing, all of which are still publicly owned and still being successfully rented out. Around 30-40% of flats in Vienna are publicly owned to this day.

Architect’s model of a 1960s seminary. It gave me the creeps. The Priestly Panopticon.

The Central Priest can see all your sins. Even when you’re sleeping.

1970s artist flat in Vienna. It was created from a tall narrow space, with different balconies holding areas like the bedroom and studio.

Rest area of the museum.

Austrian pavilion at the 1937 Exposition Internationale in Paris. The exhibition looks extremely 60s to me again.

Modernist mountain chalet near Kitzbühel. The mountain in the background, the Hahnenkamm is one I’ve walked up a couple of years ago. You can see my photos here.

The smaller gallery was dedicated to modern buildings in the Austrian state of Vorarlberg on the border with Switzerland. I often go there for work. It’s a strange place, although I like visiting there. It’s very mountainous and flat space is at a premium, so buildings are often plonked down in strange places, and there’s a lot of creative uses of terraced layouts and dramatically winding roads. There’s a flat bit! Stick the hospital in there.

They are very Swiss, speaking with a Swiss accent rather than an Austrian one, and being much more fussy about rules and timetables than the rest of Austria, and a little bit more religious (but still Catholic rather than Calvinist like the Swiss). The local dialect uses gehörig- proper, belonging to mean good or nice. There’s a right way to do things, and we approve of doing things the right way. They call themselves Das Ländle– the little country, and there’s a local supermarket chain Sutterlüty which proudly slaps stickers on lots of their products that it was grown or made in Vorarlberg. (Sutterlüty’s own brand stuff is also very nice). It’s very much Heidiland.

Despite being a little conservative and fussy in many ways, they do love creative modern architecture there though. I have often been to schools in the region that look like the Barbican. Not expensive private schools, just the normal local schools that any student can go to. (Albeit that private schools and visible poverty are rare in Austria, and Vorarlberg is one of the most prosperous and successful provinces of all).

Outside of the housing estate.

Kindergarten building. I have definitely been in schools in the area that look like this.

There was also a mini-exhibtion about experimental 60s architecture. Here’s some architecture zines from the time.

Spontaneous happenings at the art school.

They also had a section of interesting modern buildings in Steiermark, the southern province of Austria where Arnie comes from. Welcome to my UFO. (Actually part of a Catholic school near Graz).

Conversion and extension of a former monastery near Graz into an arts centre.

Inside the arts centre.

The University of Graz’s plant house.

There was also an exhibition of how Vienna dealt with housing problems in the immediate post-WW2 period. In the 1930s Austria had a home-grown Catholic fascist dictator (Engelbert Dollfuß) who seized power in a coup, but was allied to Mussolini and rivals with the Nazis, and ended up assassinated by the Nazis in a failed coup. His deputy Kurt Schuschnigg stepped in, but also eventually failed in stopping the Nazis invading in 1938 and absorbing Austria into the Third Reich.

In the Spring of 1945 the USSR entered Austria from the east, and the Americans and British from the West. For the next 10 years Austria was caught in a Cold War deadlock of different regions being run by the French, Americans, British and USSR until the death of Stalin allowed a new state and government to be finally agreed in 1955.

In comparison with current UK politics, this makes you want to cry. In comparison Austria held on to their council houses, and spent money on maintenance and building more. Vienna is one of the few big cities in Western Europe that is still doing ok for housing for the ordinary people as a result. Which is one of the things that frequently puts it at the top of Livibility lists.

Literally a paid up member of the Communist Party