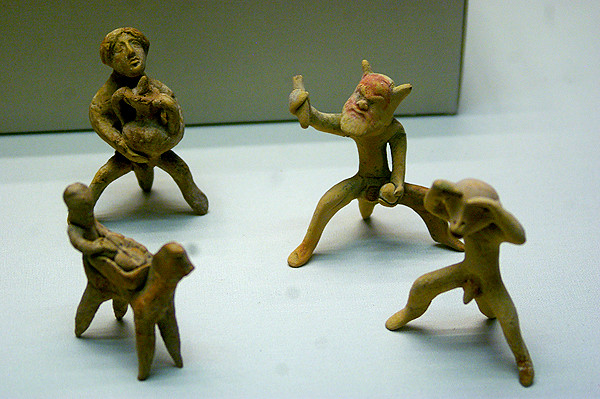 Last week I paid a trip to the British Museum. I had a review of work day at uni for my research project (I’m doing a research/practice based MA in Sequential Design) and I felt like I should do something substantialish on the visual research side.

My project’s making animated films based on selected stories from Ovid’s Metamorphoses, and I’d had the idea of doing some of the films based on related periods of greek art, avoiding 5th century Athens. So for instance Icarus would be based on Minoan styles, anything to do with the Trojan war Mycenaean, Adonis would be based on Assyrian art (it’s a fairly common theory that the Greeks borrowed the story off the Assyrians) etc etc.

My plan was to head into London earlier and spend some time drawing stuff in situ, and then meet up with my friend Michael in the afternoon after he’d finished his lecture at uni. The whole gutter then fell off the side of the house so I had to hang around waiting for the building manager to arrive to look at it, so I didn’t arrive at the museum til 3ish, so I only had time to take pictures. I then realised I had a stupid small memory card in the camera, so I only took pics of the things I needed for uni. All the pictures are of pre-classical Greek art or Assyrian art, although we did look at quite a lot of the other stuff in the museum (stuffed crocodiles and calves especially). I’ve got a reflection problem in quite a few of the pictures, and some aren’t as sharp as they could be, but I was in a hurry to get everything I needed.

Minoan pots. The Minoans were really into octopuses. Let’s be pedantic and call them octopodes, eh? οι οκτοποδες. There, putting that education into some use.

The Mycenaeans on the other hand, preferred their bling.

I love the expressions on these little figurines. I wonder if the potter was bored?

Michael inspecting a giant scarab in the Egypt gallery.

Assyrian lamassu gatepost. Giant man-bird-lion-bull thing. One of my favourite things in the museum. I took loads of detail pictures for drawing.

Mural of a king lion hunting. He’s so hard he can strangle lions with one hand. I also took a lot of detail pictures of assorted dying lions here.

My favourite dying lion. Ooh me back!

I love this griffin guy’s expression.