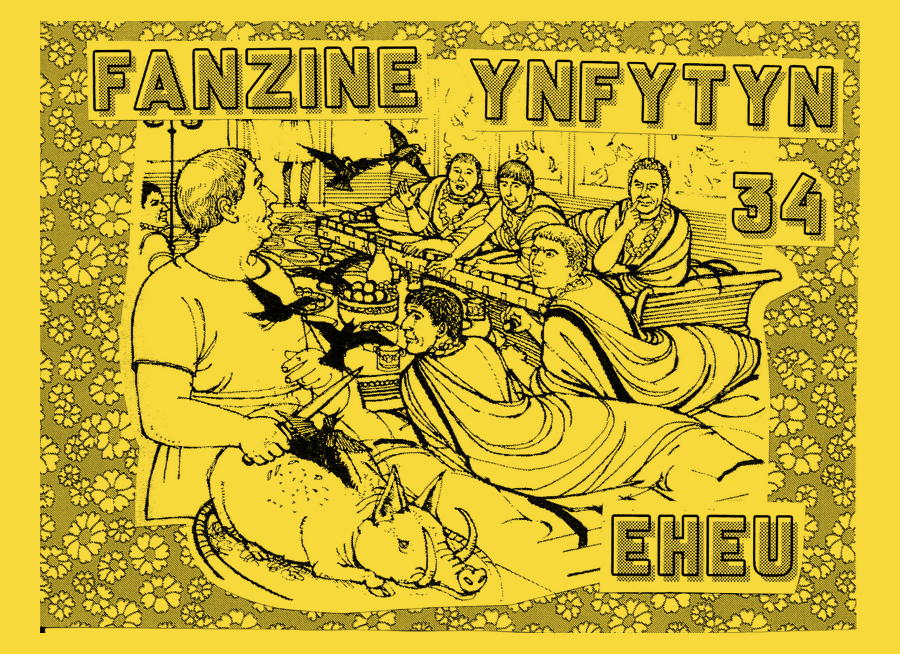 If you study Latin in the UK, there’s a very good chance you will use the Cambridge Latin books from the 1970s. Although they’re forty years old, they’re still in print (and also on the Apple Store), and have a special place in people’s hearts.

They use a combination of illustrated comics with a very distinctive art style (which I got the illustrations for this zine from) and short stories to introduce new vocabulary, grammar and social history. The thing that makes them stand out from other school textbooks is the incredibly melodramatic storyline, full of death, assassinations and double entendres. The people who wrote these books were thoroughly enjoying themselves.

The Cambridge Latin Course, digested:
(Look away if you don’t want to be spoilered for that five-year Latin course you’re about to embark on)

Caecilius est in horto. This is where he usually is. The hortum is in Pompeii. Caecilius was a real person, and you can visit his house.
Grumio the chef delights all the slave girls. (And Caecilius’ wife Metella).
Everyone gets killed by Vesuvius, except for Quintus the son, and Clemens, one of the slaves. The dog gets a tragic death scene

Quintus turns up in Roman Britain to visit his cousin and her dodgy politician husband Salvius
We meet King Cogidubnus, Roman client king and ruler of Sussex
Quintus tells the court the tale of his adventures in Alexandria:
Clemens’ attempts to set up a pottery shop, the ensuing run-in with the Egyptian Mafia, crocodile wrestling, the death of the beautiful Egyptian boy, the plots of the dodgy astrologer

Salvius is on trial for forging Cogidubnus’ will.
Quintus turns up as surprise star witness. Salvius kills himself in the bath laughing “they’ll never catch me now” (this was an approved end for Roman villains)

I’ve also got a pack of two classics-related zines on the shop for £2.50. You can find them here.

Bonus: a section from issue 34 I ended up cutting for space

The Palatine and Forum – Rome

The Palatine is where the Roman Emperors had their palaces (hence the name). The Forum still has the ruins of the temples and other buildings surrounding it- the scale is huge. I visited mid-Winter when there was practically no-one there, something I highly recommend.

However on the same trip my passport was stolen in the Vatican. To get a temporary passport from the UK embassy, we needed a police certificate that it was stolen. Whose jurisdiction this came under was debatable however, especially as there are several kinds of police in Italy.

While chasing round different police stations to get this thing stamped, someone used my passport to cross a border. Resulting in it taking around six months to get a new passport, and five or six years of being pulled aside for extra questioning every time I travelled abroad, even within Europe. I have scanned but not yet posted some 1960s slides of the site- they will be here eventually.

Lucius Caecilius Iucundus was a real person and you can visit his house. It has a mosaic doormat with a design of a greyhound type dog very similar to the dog in the textbook. Pompeii is all dust and endless geometric avenues and stepping stones across the streets.

The Roman graffiti is still in evidence and some of the courtyards of the grand houses have been re-planted with same plants that grew there in Roman times. You can see some 1960s slides of neighbouring Herculaneum I scanned here.

This is probably more like the Roman equivalent of a motel rather than the actual house of Catullus – there’s no strong historical evidence for the attribution, but it’s still a very impressive sight, jutting out on a peninsular into Lake Garda. You can see my photos here.

Full of steaming sulphuric water  and defixiones (curse tablets) fished out from the water wishing doom on the rival chariot team and the man who stole the writer’s sandals from the changing rooms. The home of Roman religious syncretism – dedicated to both Celtic Sulis and Roman Minerva.

Silchester is the could’ve should’ve would’ve been of Roman cities in England. It’s a sizeable place, and mostly forgotten, apart from Archaeology students from the University of Reading going to practice there. My friend Rupinder found a Roman earring on a practice dig. It’s also right next to Aldermaston nuclear weapons research base. When I used to go there in my university days, the neighbouring cottage had llamas in the garden.

A luxurious Romano-British palace near Southampton. No, King Cogidubnus was not assassinated sighs the tour guide wearily, after too many people visit who have learnt from the Cambridge Latin Course. You can see my photos here.

At last all those lessons on how to read Roman gravestone abbreviations are of use! An impressive site with a mix of Roman buildings and later Marabout tombs. You can see photos here.