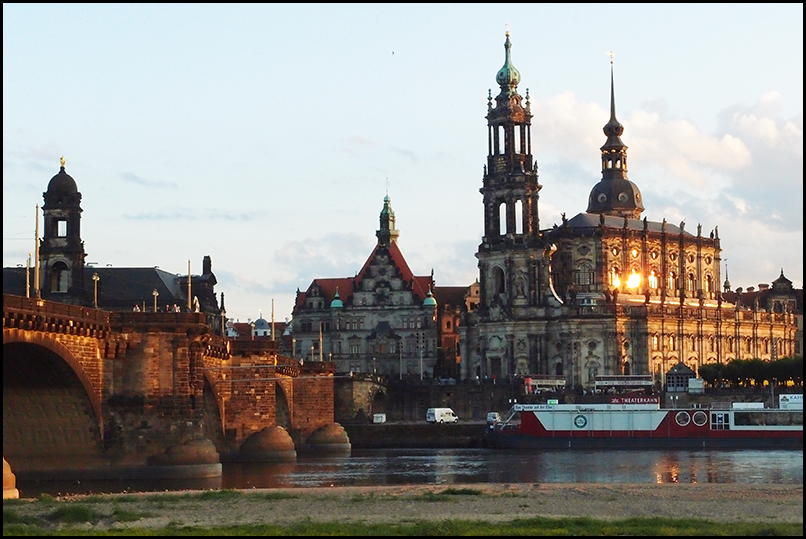 I spent a week in Dresden. When I wasn’t working, I was exploring, either alone, or with my co-worker Hazel. The city was completely flattened in the Second World War (pointlessly in my opinion- it happened right at the end of the war, and Dresden wasn’t an industrial target). The DDR regime didn’t do much to restore the old town centre, but after reunification it was all put back together as much as possible as it was before (they kept a lot of the stones in a warehouse). The the city is a strange mix of restored Baroque, super-spruced up restored buildings, dilapidated buildings waiting to be restored, and randomly spaced gaps of bomb sites that haven’t been built on yet. The setting of the city is along the River Elbe- you can see the wide banks left empty here- it’s prone to flooding. The local accent also sounds very much like a Brummie speaking German.

Most of the old town centre looks like this- with the exception of a huge super-modern shopping centre by the main train station.

Hazel by a church in Radebeul.

A lot of the industrial chimneys along the river have been painted in these blue and green stripes to blend in with the attractive river setting better. I like the effect.

There’s a lot of feeling of space in Dresden. It’s a big university city, but it’s not particularly densely populated.

A block of communist era flats half-way through being renovated.