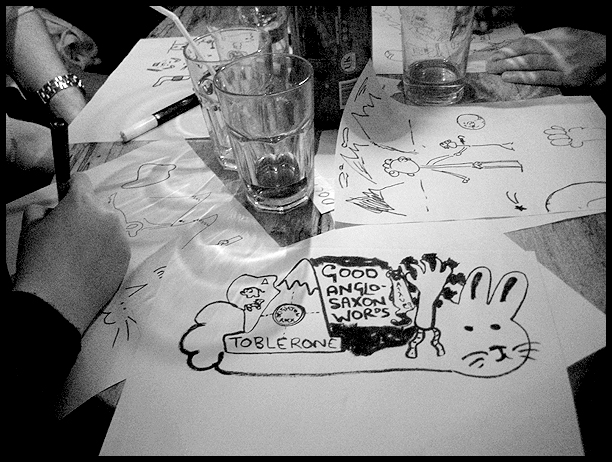 My friend Adam from art college runs a pub drawing game night called Drinky Doodle in Brighton. I couldn’t make the first one, but I managed to get to the second. It’s at a nice scandinavian themed bar. There are assorted themed games where you have to either draw what’s on the card you drew out of a hat, or draw the things that are shouted out. Sadly I missed out on the That’s Life Drawing they did last time, where you drew stuff out of the magazine. I love those awful “REAL LIFE DRAMA” magazines.

Picture consequences. As each round was finished, the pictures were hung up on lines across the room. It looked most pretty with all the fairy lights.

A word was shouted out every 30 seconds or so, and you had to add it to your drawing. Words were (in order): Africa, cross-section, mountain, fuck, feline, prosthetic and rabbit. You can’t really make out my cat here, he’s to the left of the hand o’doom. The cross-section is of a piece of Brighton Rock.

The last round was drawing Argus Headlines (the local paper in Brighton is famous for its ludicrous cover headlines). Here’s my fairly literal (and apparently quite disturbing) rendition of the one I drew out the hat.

Here’s my drawing from the “draw the stranger whose name you picked out” round. It’s notable not for my fairly bland, but accuratish drawing of my stranger, but for the drawing of Alex that looks EXACTLY like him, and just is him.

Next day one of the things I did at art college was a workshop on “Reading Objects”. Everyone had to bring in an object whose purpose was mysterious and you had to guess and speculate. I brought in a drum machine labelled in Hindi.

Three separate people brought in antique tie presses. Two people even bringing in the same model. I’m quite impressed at how many people I know who even own one. Orange peeling tools were another popular one. My personal favourite was the creepy looking child’s radiology mask.

It would probably have been slightly more fun if there hadn’t’ve ended up with 50 objects. 15 or so would’ve been much better.

I saw this on the windowsill.