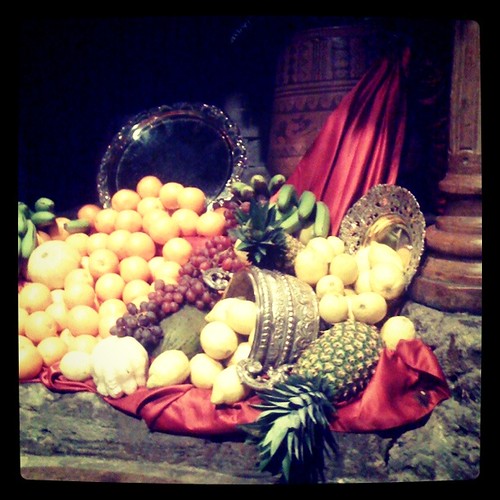 Even if I set out to make a film about a fillet of sole, it would be about me.

Last night Marcos’ parents took us out, it ended up being weirdly decadent.

We went for a drink at this place. At 11.30 on Fridays they shower you with rose petals from a balcony. The whole place is decorated like some kind of baroque stage set from a Fellini film. In fact the whole place is like a Fellini film. They don’t allow cameras inside, but I took some photos on Marcos’ phone. Instagram photos look amazing on the screen of the iphone 3, but they don’t always look so wonderful on the computer.

Senor Byrona poses on the mantlepiece of the drawing room.

They used to have free-flying doves at this place too apparently.

We went for some food at a popular local restaurant (the website has awful music-you’re warned). The food was amazing- I had the gorgonzola and pear ravioli and we shared some tapas. Next to us was a really creepy guy. We kept overhearing his conversation because he had such a loud obnoxious voice. It soon became clear that his date was from an escort agency, and he kept comparing her to a previous girl from the same company saying stuff like “we had a real connection, not what you expect from these things” to which his date replied “oh she told me” and he kind of acted like he was trying to intimidate her into making sure he had a really, really *good* time. I don’t know how to explain what a total creep this guy was, but he just was. Once I saw a classified advert asking for an attractive female housemate who could live in the flat for free in return for housework and spanking sessions. The advertiser described himself as “extremely affluent, with a rugby player physique and an interest in yachts”. My mental image of the advert guy pretty much fitted exactly how the restaurant creep was.

Pure Fellini. They served us drinks in glasses big as fish bowls. I was stuffed with delicious rich food and the drinks defeated me.