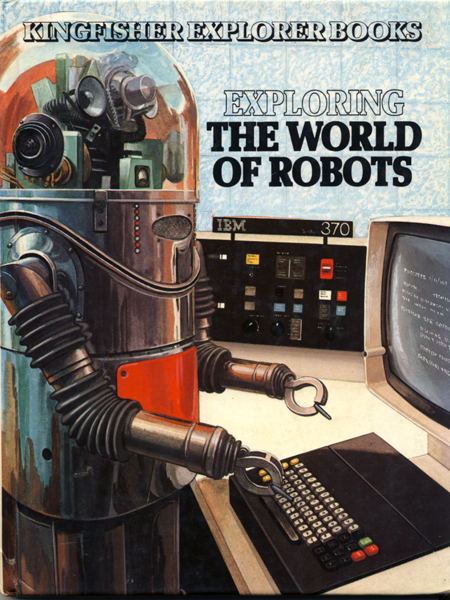 Exploring the World of Robots

I’ve had this book since forever. It was part of a set of educational books that were a hand me down from my cousin. The others in the set were pretty standard, on topics like animal migration or cars, but this one is a bit odd. The others in the set have long gone to the charity shop or another relative, but I’ll always keep this book.

Break dancing and skateboarding combined. Aspiring to be the coolest kid in North London circa 1988. Probably not succeeding. If you want to stalk my relatives in the late 80s, the phone number and address are 801-6134 and 118, Risley Ave, Tottenham, London N17. Generic suburban London.

The Maid Without Tears. You can be as cruel as you like to your mechanical slave, and it can’t cry or feel anything because it’s incapable of doing so. Isn’t the future swell. Nice gold lurex dress and purple tights combo. I want one. Good ‘tache too.

Severed robot head in gold lurex balaclava. Also, did you know robots in disguise are all around you, and you never realised? Cue paranoia. This book is pretty badly researched, this robot didn’t even exist. It was a costume for performers at trade shows.

The next few pages are full of stuff like the history of automatons and military robots, and pages trying to convince you that washing machines, calculators and even thermostats are actually exciting kinds of robots. (Nice try).

Here’s the good stuff. In the future you sit around in your turtleneck using a giant remote control to buy stuff while a shiny robot hoovers and your computer suggests the menu for today. Seeing what search suggestions google comes up with does not really want to let a computer suggest my menu for the day either. “Robot brain” makes me think of a giant mushy pink thing kept in a tub in the garage, with electrodes and cogs coming out of the walls into it. Quasar’s big clumsy thumbless paws were clearly built for strangling. Treat him well.

We had all the other books. They weren’t that interesting. The titles were always far better than the contents. “The Midnight World” was facts about owls and badgers and things, but the artwork was terrible.