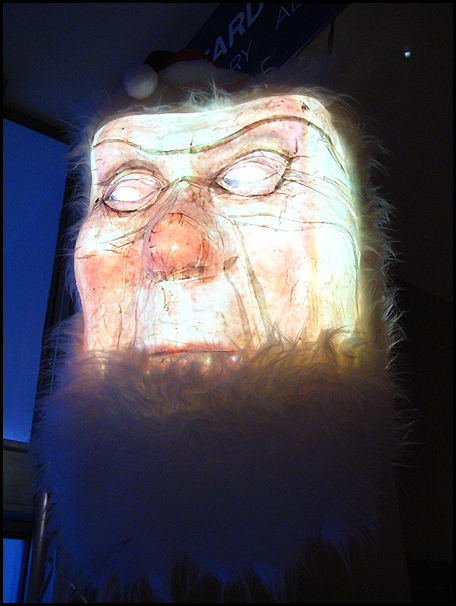 I went to see this exhibition at the Festival Hall a little while ago. Forkbeard Fantasy are a group who create stage costumes and props, and make films and peepshow art installations. (I misspelled it as “Folkbeard Fantasy” when I was labelling the Flickr set, which kind of makes sense). There’s a strong theme of fantasy, humour and surrealism in all the work, and most of the things in the exhibition were for touching and using rather than being locked away in glass cabinets.

Right near the door was this huge unicorn puppet from a theatre show. You could pull various cords and make it move very realistically, although it needs two people for operation.

There were some creepy costumes of rabbits …

This puppet was rigged up to sensors to start moving when people approached it. Stuff of nightmares.

I particularly liked this puppet of nerves.

They also had a lot of mini cinema diaramas with a film playing at the back. You stuck your head under a curtain to see into the scene.

They had a character of a fake Michael Winner style director explaining their films.