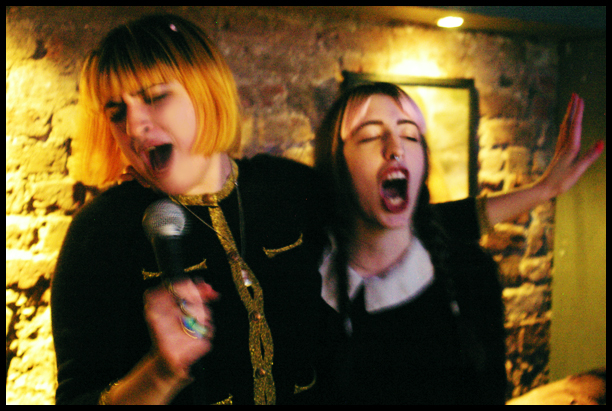 So on Tuesday, me & Tukru went to the Girls Get Busy birthday party at the Alibi in Dalston. Dalston is currently a bit of a pain in the arse to get to from mine, you have to walk about 20 mins to West Hampstead and then get the Overground (and two night buses back). There was Riot Grrrl karaoke, and cake, and Tukru and some other people I know djed, and overall I had a good time and met some nice people, although it would have been better if the prickish men hanging out round the bar hadn’t been there.

I got chatting to Sarah because we both had cameras. I thought she seemed vaguely familiar, and then when I checked Facebook she was a friend of a friend and I’d seen a picture of her before.

Camille, one of the organisers, queuing up the karaoke tracks.

Waiting for a drink.

I can’t remember who sang what songs now. Camille & Beth, the organisers. I feel this photo = spirit of karaoke

I chatted with the girl with the braids, she was really nice, but now I can’t remember her name properly. Annoying.

It took us ages to get home, because we had to change night buses at Holborn, and the place where the next bus was going to stop was under roadworks with no sign of a diverted stop, and we ended up having to walk to New Oxford St to catch it. We were glad to get off the Dalston bus though, there was a guy on there coughing and sneezing so violently that a huge glob of green snot shot onto the bus floor.