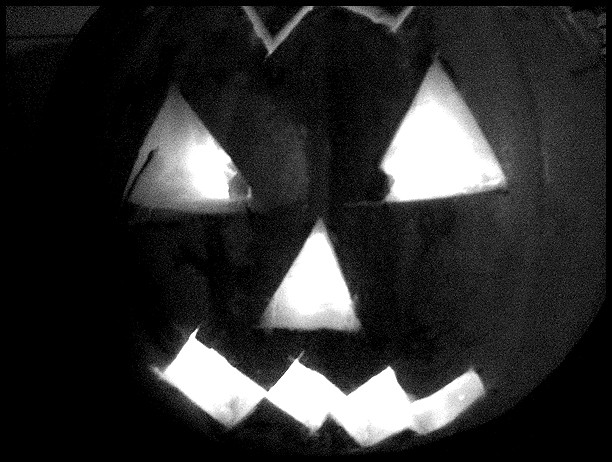 So I didn’t do anything Halloweeny on the Saturday night, so I felt like I should do something of some sort on the Sunday night. A few friends came round, we drank a fair bit and listened to records. There’s a Ghost in My House- the Fall, about half of Spiderland, and Trail of Dead.

Mein haus, before people came. The vertigo picture and flokati rug are mine, the other furniture was there when I moved in.

I found that chair on the street and bought a cushion for it. It needs a new cover, it’s currently just got a duvet cover draped over it. The Nightmare before Xmas cushion usually resides on my bed. My housemate has a very very good stereo.

Me & Rachael had plans for undead Daria & Jane Lane, but she couldn’t come out all weekend because she had to agonise over an important essay, so I got my standard halloween outfit out. Prim little dead girl dress that Bryony gave me for xmas a few years ago, and large amounts of makeup (it was dark purple and black in real life, with the shiny bits silver and green glitter)

I’m against Halloween outfits that are too everyday pretty, you’ve got to look a bit eerie. How often do I get to cover my face in black eyeshadow? Well, maybe it’s a look I could take up, but I’d rather not.

Jack wasn’t very happy at being forced into cat ears. I guess he’s not a fan of costumes.

Jack wanted to learn the guitar, so I taught him 4 chords and the powerchord. He can start two punk bands now. He took to it pretty well. Yes, the guitar is lurid silver.