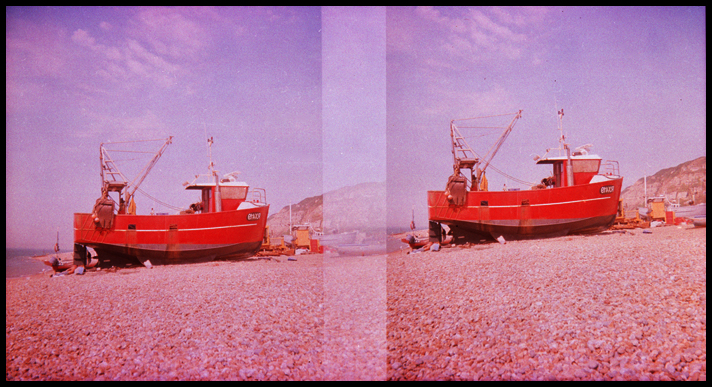 I got some films developed a little while ago, and it turned out some of them are from quite a while ago, and had been lurking around in drawers for a long time. This one is from 2006. I’m not sure what camera I took these with, some kind of box camera or Diana or something.

I was working at a summer camp in Rochester after I’d graduated from uni. The kids came from various different countries and came over for a few weeks to improve their English and do sightseeing. My job was supervising trips and sports and running art and drama sessions. We had a lot of trouble with the trips. They were supposed to be booked from Head Office, but whoever was doing them obviously didn’t have a clue about the various tourist attractions in the region. As well, these summer camps usually have the tickets for things paid for in advance, and you just show your work id and collect them when you turn up with the kids. They just gave us cheques to pay with when we turned up. The fact that Head Office didn’t have to contact the places in advance to pay for them resulted in things like us being scheduled to visit the Dickens Centre which had closed down about 5 years previously. They also hired the cheapest bus company they could get, and the buses never had working air conditioning and often didn’t know where they were going.

The clueless person doing the bookings also had some very strange ideas about how long you should spend at places. We were only booked for 2 1/2 hours at Leeds Castle, and a whole day at Hastings Castle. I guess they thought “Oh the Battle of Hastings, Hastings must be an important castle.”. It’s a ruin that takes about 45 minutes to see every detail including the educational video and the disused dungeon. Leeds Castle is a huge place with an intact castle that people still live in, and a maze and aviary in the gardens and a museum inside and all sorts of other things to do. Hastings Castle is also on top of a cliff, accessed by hundreds of stairs. We were scheduled to march all the kids up to the castle at midday in a very hot summer where the temperatures were above 25c every day. They weren’t happy by the time they got to the top.

After spending the required desultory 45 minutes at the castle, we took pity on the kids and let them spend the rest of the day looking at the shops and cafes in the old town or on the beach.

When the tide started to come in I told the kids it was time to leave the beach. A group of Turkish girls were slow about getting up, because the Mediterranean has much lower and slower tides than the Channel. When the water was suddenly near them, they jumped up in surprise, and one of the girls twisted her ankle on the stones. As her friends were helping her hobble back to the bus a seagull shat on her head. Not a great day to be her.