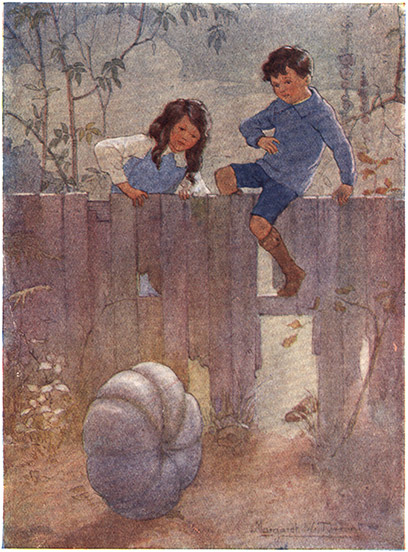 (Illustration by Margaret Tarrant– from the original 1917 publication, and included in the ebooks)

Knock Three Times is not a well-known book, which is a pity. As you can see from the illustration, it involves children being menaced by an evil grey pumpkin. Molly and Jack write to their aunt asking for birthday presents- Jack would like some art supplies, and Molly some jewellery. The parcel they receive does include a box of paints, but Molly receives an ugly grey pincushion shaped like a pumpkin because it’s more “sensible” than a bracelet. Annoyed, she sticks some pins in it, and puts it on a shelf. In the night the pumpkin grows huge and rolls away into the woods. The children follow, and end up going through a secret door into another world.

There they discover that the pumpkin is public enemy number one, known for the sadistic curses he puts on anyone he touches, and for basically heading up his own cult. The children sign up to help hunt for the magic leaf which will disable him. It’s basically a strange cross between the Wizard of Oz and North by Northwest. Two children making their way across a remote landscape of heaths, forests and lakes, trying to work out who they can trust of the people they meet in isolated cottages, and always looking over their shoulder for the slow rumble of a pumpkin behind them. It’s a children’s book, but a very eerie one (although a quick read). The back of my copy says “This eerie tale of high adventure has an enduring appeal to all who love to have their blood deliciously curdled“

It’s also surprising how undated it is. Despite being written in 1917 there is no nonsense about the brother being the boss or assuming the sister is unable to do things. The children are treated equally.

Also, as it was written in 1917, it is now in the public domain, and available as a free ebook from the Gutenberg Project.

This is my edition, which I accidentally have two copies of. One in good condition I bought in a charity shop a few years ago, and then my original battered one from when I was younger, which I found when helping my mum to move. A shop near my mum’s work sold these Wordsworth Classics paperbacks for £1 in the early 90s. They are flimsy, cheaply printed books of out of copyright texts, but the regular supply of new books she brought home was always welcome. It also meant I ended up reading a lot of classic books from the 1800s. And some almost forgotten ones like this, that just happened to be public domain.

Books were more expensive then, and new full-price books were a treat, not something you threw into the shopping basket at the supermarket. The Net Book Agreement was still in place until the late 90s- basically all books had to be sold at the cover price. This was good in that it enabled small bookshops to thrive against the competition of huge chains, but also meant that there were not many cheap new books to be had. The local and school library had a good selection, as did the charity shops, but I was one of those kids who devoured books, so the more different ones I could read the happier I was.