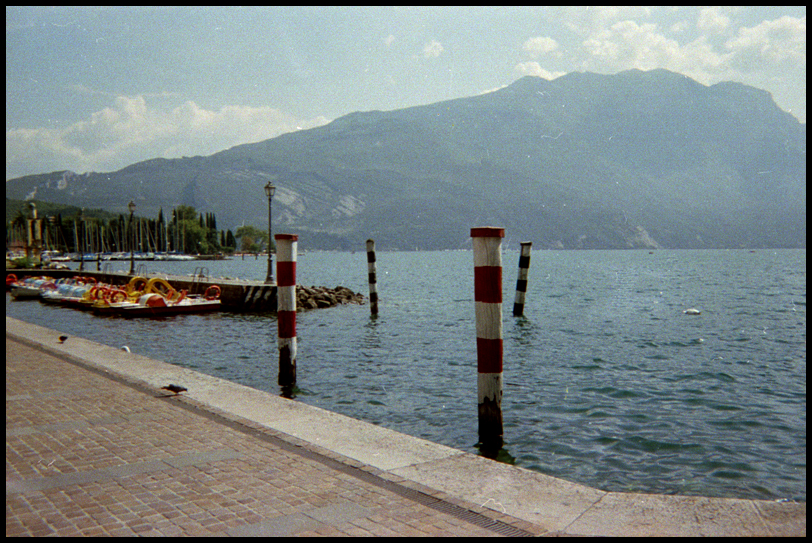 I was tidying up recently and found these photos of Lake Garda. I’m not sure when I took them, because I’ve been there a few times, but it must have been between 1998 and 2001 when I was 13-16. I went to that part of Italy for the first time in 1998 (I’d been to Liguria before on day trips, but that was it) and I got a APS camera in 2000 and these photos were from a disposable camera.  The first time we went was by bus. Going from London to Italy by bus is not a particularly pleasant experience, especially if the recliner on your seat is broken.

The next year or so you could suddenly get really cheap flights to Brescia for about £20, so I often went to Italy with my mum. These pictures are of Riva del Garda. Italy was very cheap before the Euro for visitors from the UK. It was a little confusing that the Lire and Pound signs were the same though. At the time £1 GBP = £2000 ITL, so you’d see a price tag like £4000 and your brain would take a second to remember that it was Lire not Pounds.

They had also run out of small change at the time, and the government wasn’t going to mint any more small coins because the Euro was coming soon, so shops would often give you a handful of sweets instead of £50 coins.  I was particularly impressed with the stationers in Italy. The parents have to provide all the notebooks and folders for school there (unlike in the UK where the school gives you drab cheap ones for free), so the shops have a huge assortment of fantastic cheap notebooks and folders with nice designs, because heaven forbid your seven year old doesn’t have chic school supplies. I can never resist nice stationery, and at the time in the UK it was either expensive or hard to get. (The growth of Paperchase has done a lot to change that).  Lake Garda is still one of my favourite places, although I haven’t been back there for about 8-9 years