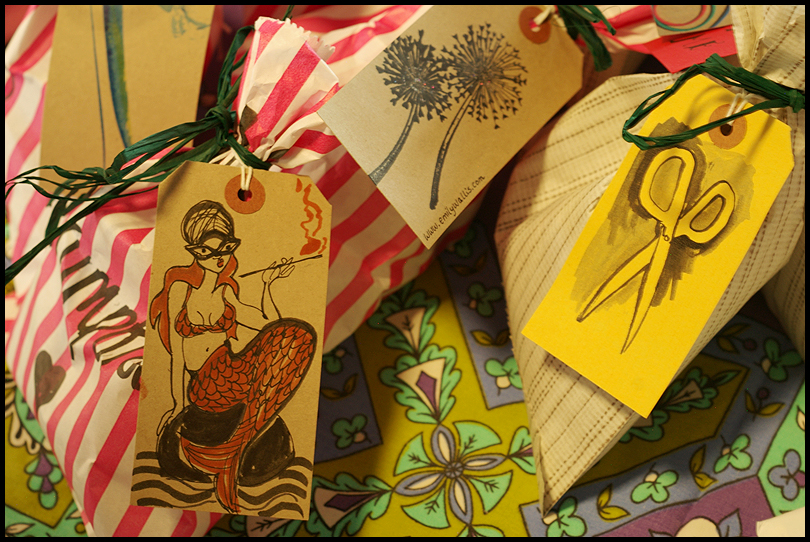 On Wednesday we had a bakesale fundraiser for our graduating exhibition. For some reason university regulations only allowed us to sell home-made food in the foyer if it was packaged up, so we made goodie bags and boxes. Some of the focus in these photos is a little odd, because my lens got jammed onto f.17 without me realising until later that afternoon (the aperture clutch thing is a little unreliable). That’s also why there aren’t any people in the pictures, because everyone ended up with things like an out of focus nose.

All of the students made decorative labels to attach to the bags and boxes.

People brought in cards and little pieces of artwork to include too. (Suit man artwork by  Nele Anders)

I brought salted caramel chocolate cakes and strawberry macarons, and other people brought homemade rum chocolates and vegan chocolate cookies, and we filled up the bags with cakes and cookies, and the boxes with macarons and chocolates, with a handful of kids party sweets as well. I forgot to take any pictures of the cakes and things until it was too late and they were all tied up.

We then had a stall in the foyer of the art college, and managed to raise about £50 for our exhibition fund. A woman also asked me how much I would charge to bake 100 macarons for a party in November, and I made up something off the top of my head that is probably far too low, because she *really* wanted to know. I doubt I’ll start doing catering for people’s parties though! I was surprised, because I thought the macarons had come out a bit blobby due to the nozzle on the piping bag breaking. If the force of some meringue mix can cause a plastic nozzle to split, then it’s probably time to invest in some better icing equipment.

Closeup of the goodie bags.