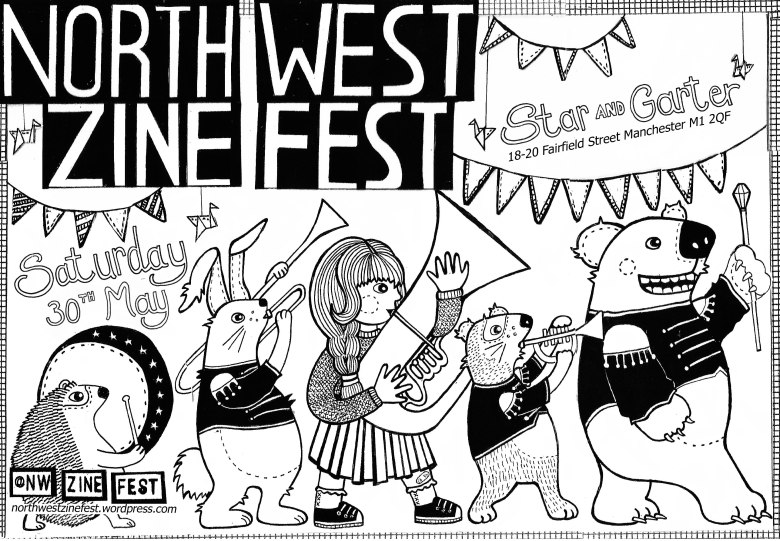 Last weekend I went up to Manchester to do a stall and run a Zine 101 workshop at the first Northwest Zinefest. I had the luxury of a day off work, and enough money to take the train rather than coach, and stay at a bed and breakfast. The last time I was in Manchester was well over a decade ago, and it was nice to have a whole weekend rather than rush to and from the event.

I was delighted with my b&b, in the home of the lovely Gwyn, who is an artist who also has her studio in the house. Everything was clean and calm, and painted white, with trompe l’œil paintings. There was a huge selection of herbal teas and muesli and organic toiletries, and it was all so relaxing I was very sorry to leave. When there was torrential rain on Sunday morning I wasn’t too sad that I couldn’t go out exploring, because it was so nice at the b&b. (I didn’t take any interior pictures, because there are good ones online)

I was staying in Chorlton, which I’ve had a lot of people from round Manchester claim is “poncy”. I was looking forward to seeing some peak hand-knitted yoghurting, but I was disappointed. There was a very pleasant high street, with a mix of shops and a supermarket and some more upmarket cafes and bars, and a big health food co-op, but it was all pretty ordinary. Maybe I got spoilt living in Brighton, but I was expecting a higher standard of soft jessying. There were some good charity shops though, and it was a very pleasant area.

I didn’t get to go on the famous trams once while I was there, because there were engineering works, and they supplied a dreaded rail replacement bus instead. I’m not sure what show it was, but in the late 80s/early 90s I remember watching some kid’s supernatural drama type show, where a group of children from Manchester have an adventure in a magical land, but when they return home things follow them, and there was a creepy bit where they were going somewhere on the tram, but being menaced by some supernatural force that none of the adults could see. I guess the forces of darkness were winning against Manchester’s transport last weekend.

My workshop went well. I didn’t take many pictures at the event in the end, because the venue was a pub, and the lighting was a strange mix of daylight and green disco lights that made everyone look ill in pictures, and it seems silly to take b&w photos of colourful stalls.

(My friend Rebecca and her husband)

The next day, I had originally planned to dump my stuff at the train station and go for a good old wander before meeting Ingrid at the cinema to see the new Moomins film before my train back, but there was torrential rain all morning, so I spent a relaxing time having a long bath, reading a book and having a leisurely lunch at the b&b.