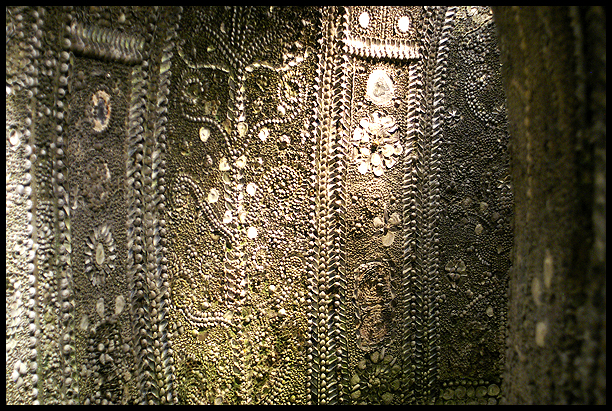 Earlier in the summer I went to the Margate Shell Grotto with my mum. I thought it was a piece of victorian tourist kitsch from memory, but it wasn’t like that at all.

It’s some creepy tunnels under some houses, with every surface covered in shells. They’ve got no idea who built it or why or when, and they can’t carbon date the shells because the gas lamps installed by the victorians covered them in soot. The cement’s like roman cement and made of volcanic ash (no volcanos on Thanet). At the end of the tunnels is a little altar room with a seriously creepy feeling. I was the only person down there and I felt a bit like Indiana Jones.

Central cupola to let the light in.

Look at the intricate detail.

Reconstruction of what the shells looked like before the victorians spoilt them with gas fumes. (They can’t get the shells off to clean them without breaking them, and they can’t clean them on the wall either)

Strange shell lady sculpture in the cafe upstairs. I sent postcards of them to various people. My mum also bought some gemstones for my aunty, and I got some coloured quartz slices to hang in the window.