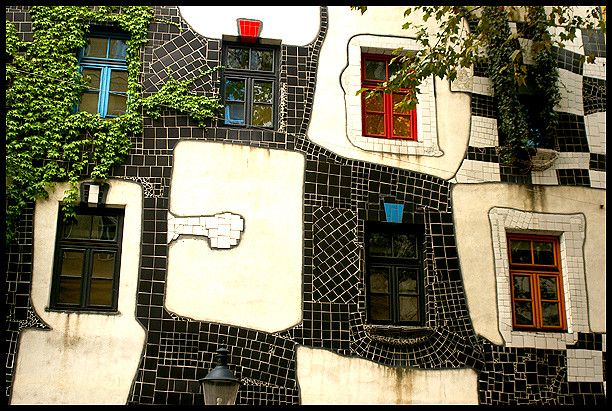 Also on my to-do list was the Hundertwasser museum. If you’re not familiar with him he was an Austrian painter, architect, graphic designer, environmentalist and all round interesting eccentric.

Here’s the outside of the museum

And the inside. All the lines of the building are rounded and organic.

The roof is covered with plants, as per Hundertwasser’s philosophy of architecture.

Inside there was a permanent exhibition of Hundertwasser’s work, and a temporary exhibition of the photographer/revolutionary Tina Modotti

Right after I took this picture, a *very* snotty gallery assistant dressed in expensive black came and told me off for taking pictures. Then she told a little boy off for talking. I don’t think good old cranky rebellious nudist Friedrich would’ve taken very well to that somehow. The staff in general were a bit rude and unfriendly, except for the coat check lady who was lovely. So no more pictures.

Oh actually you’re allowed to take pictures of the stairwell for some reason.

Next I went to see a block of flats in a neighbouring street that Hundertwasser had designed. I was most amused to see a little shopping centre next door selling almost nothing but crappy souveniers of his paintings.

There’s a cafe upstairs, and trees on the roof.

Lots of trees all around, too.

I think the side of the building with the mosaic squares looks nicer than the painted side, because it’s not so obvious when it fades.