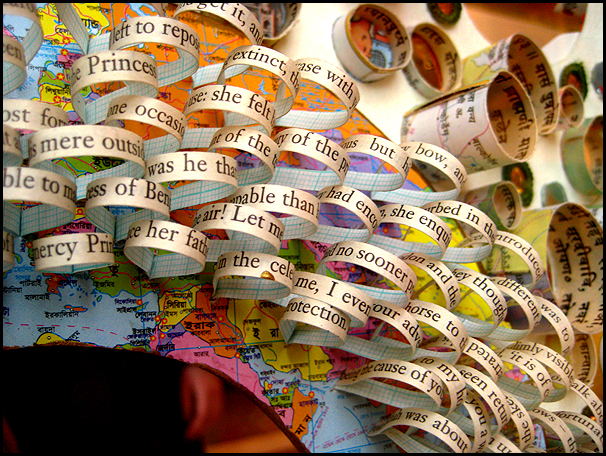 On Saturday morning I did a zine workshop for the Brighton Popular Education Collective who run a day of free classes and lectures on things like bike mechanics, sewing and local history one day a month. It was the same workshop I’ve done loads of times, and it always seems to go down well. This time I had both a lady in her 50s and a very enthusiastic boy of about 7 there.

They didn’t pay me to do the class, but they did buy me the train ticket. I ended up back at Victoria at lunchtime, and decided I should do something in London on a whim. I didn’t really have any money so I decided to go to a museum because they’re free and I love museums.

I haven’t been to the Museum of Childhood in Bethnal Green since 2003 and they’ve had a big refit and changed the displays since then. I really enjoyed it then before the refurb, and I enjoyed it again afterwards. I’m not one of those people constantly yearning for their idyllic childhood, but I am fascinated by the history of toys and packaging design, and there was plenty of interesting stuff in the museum. I hadn’t realised how many toys I had from the 60s and 70s. I’ve got about a million cousins, and no-one in my family ever throws anything away and a lot of them are obsessed with second-hand bargains, so there was a lot of hand-me-downs and hand-me-arounds going on. My parents had a big house (we used to rent out two of the bedrooms) so there was plenty of room for junk. Looking at the museum I realised that I had loads of 60s Sindies and Barbies, but they just hung around in a box until they were given to my cousin Sarah because I didn’t have the slightest interest in dollies, only ponies and dinosaurs. I wonder what happened to them. I used to have this rather elaborate Sindy house sitting on the landing that came off my cousin Jasmine (her of the infamous Burberry pushchair and daughter named Paris Tallulah). I really didn’t have the slightest interest in it. I was busy putting sticky backed plastic on toilet rolls and going round the garden with a microscope. There was also a handmade dollshouse at my grandparents’ house that my grandad made for me to share with my younger cousins Lauren and Jody. Again, I really wasn’t interested, although it was a very nicely made house.

At the entrance to the museum they had two art exhibitions. The first one was a kind of art exchange between local artists and ones in Bangladesh and India. I really liked the colours and textiles

My favourite was this huge detailed collage piece by Thurle Wright

The second was giant photographs of odd looking dolls from the museum’s collection.

These two particularly caught my eye.

All the better for eating you with my dear.

I started with the optical toys, because they fascinate me.

I wish film strips had still been a common thing when I was a kid, but I guess them seemed a little pointless with video players being so common in the 80s.

I love this kind of crap.

I also love toy theatres and dioramas. After I went to the museum I went and had a look in Benjamin Pollock’s in Covent Garden, a fantastic toyshop that specialises in toy theatres. As I was coming down the stairs there was a very plummy older couple in front of me. The woman was wearing what I can only describe as a daytime opera cape in fleece and the man was holding his phone in front of his face in that way only older people who don’t understand mobiles and need stronger glasses do. He answered the phone, had a brief conversation of 2 sentences or so, and then told his wife “It’s Peter, he told me he’d pick up Edmund and meet us at the station at 6”. I think they might have been the Narnia parents, and I couldn’t bring myself to say that their children were going to die in a horrific train crash, all except their lipstick-loving hussy of an older daughter.

Look at this fantastic mermaid and two-headed lion filled toy theatre. I want. It was huge.

I liked something about the crappiness of this castle. It looks like a cheap comic become 3d.

I didn’t spend much time in the doll and dollhouse section, because there was other stuff I wanted to see more. I love this doll’s wardrobe though, look at the detail.

I could’ve sworn there was a sylvanian families house you could get that looked exactly like this (I had the sylvanian families log cabin. I also drew on the mouse’s face with crayon and then got upset when it wouldn’t come off the flocked finish). This is a handmade victorian one though.

70s Blythe. I make an exception for Blythes. I haven’t got a 70s one, but I have got three modern ones, one brunette, one redhead, and one with pastel pink hair.

I tried and failed many times as a kid to do magic tricks. Once me & my cousin Chris decided to put on a magic show for his sister and mum with a Paul Daniels kit he’d got for christmas and a book of knock knock jokes. The magic tricks didn’t work and the jokes weren’t funny. They were polite and clapped though.

I can’t decide if this is creepy or amazing and if I want one or not. I don’t dare google “play sack”.

OWL SACK! The beak shape is a hole for the face.

I was very much into spirograph and I’ve still got some (small) bits now which I used to decorate issue 8 of my zine. Whirly wizard is an even better name and box design though.

I would definitely have been into this as a kid. I was never into stamp collecting though, it seemed too precious. I prefer to use stamps to send people letters. I’ve always really liked the 1960s pre-decimalisation pennies with the modernist ships on them, they feel a bit like Blue Peter money or something.

A chemistry set was one of the few things I wasn’t allowed, much to my chagrin (I was very into science, I had a microscope I loved and I devoured books about evolution and how to produce your own slides and make plaster casts of animal footprints). My older sister caused havoc with hers and managed to cause this indelible brown stain on the kitchen ceiling that would slowly ooze through any paint. I’m not sure what exactly she did to cause that result. It double burned, me not being allowed one, because my favourite book was about kids who get a magic chemistry set and get into all kinds of amusing and surreal scrapes. (I would still recommend the book)

I like to imagine these two owls have a fraught marriage. Speccy owl is always leaving marmalade on the Telegraph and Frowny owl cooks horrible worthy things with boiled lentils.

Can never have too many owls.

Bear with a balalaika. What more can you ask for?

I used to have a very similar satchel, except made out of plastic. I wish I still had it. I’d like to get a satchel, but they’re all leather, and I don’t use it. I still have a canvas army bag from my schooldays that I continue to use. I remember having a debate with my friend Chloe aged 6 or so. I claimed my satchel was better because it was shinier and not made out of animals (wasn’t yet allowed by the parents to be a vegetarian, but I wished), she said her leather one was better because it was biodegradable (except explained in 6 year old terms of melting). You can see what kind of recycling, radio 4 listening parents she had (I was all for saving the whales by buying body shop soap myself too). I also had a great Puddle Lane bag. It later went to a charity shop as I got older. When I was 15 or so I saw an indie girl around town with my bag. The exact one with the pen leak mark in the same place. I didn’t go up to her and say anything, because what do you do in that situation? It was a good bag, anyway.

Want this mickey mouse shirt from the 70s, even though I don’t even wear white or red.

This swiss costume is made of lovely fabric.

Look at all the details.

There are activity stations in each section with hands on things like dressing up costumes, games and quizzes to keep younger children occupied. I kept running into this gleeful little girl dressed up as a potato, and kept wondering if it was really a potato suit. It really was. They had a food exhibition with vegetable suits to play in.

I’m really obsessed with vintage food packaging. The fact that printing technology meant that you had to use flat planes of colour for cost effectiveness really gives them the design edge over the cluttered modern designs full of tacky colour gradients and outside glow in letters.

I’ve got a few taschen books on the topic. My favourite two are the one on children’s food packaging design of the 50s and 60s and the one on east german product design.

Next time I have a party, I’m using Wombles plates, alright? I was a big Wombles fan. My older brother had been a big fan in the early 70s, and as I said before, nothing was ever thrown away. I had all the books, and all the albums on vinyl, and the cartoon was always being repeated on tv. I couldn’t quite decided if I wanted to be Orinoco Womble or Snufkin from the Moomins when I grew up ( in my spare time from being an archaeologist/famous plasticine modeller of course). I’m not sure what that says about me as a kid or now.

After going to the museum, I chased around the bit between Soho and Covent Garden fruitlessly looking for the Photographer’s Gallery and wondering why it used to be so easy to find. It turns out now to have both moved somewhere else, and to be closed for refurbishment. I did spot this magnificent second hand bookshop though, which specialises in music hall regalia and books about the theatre.