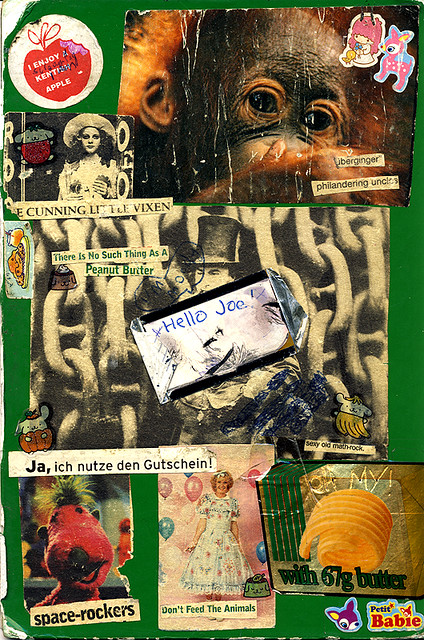 When I was 17 or so I used to carry this notebook around in my bag to jot stuff down in. In boring moments in the pub, friends used to draw in it too. I managed to lose the insides (I’ve still got a few pages somewhere, but I haven’t seen then in a while, I’m sure I’ll uncover them when I return to Brighton and unpack my stuff). You can see where other people have scribbled stuff on the cover too, and polaroid stickers got stuck on, and then fell off where the material was so flimsy. Those polaroid izone stickers were a bit rubbish really. I scanned the covers a while ago, and forgot about it, and just noticed them on my flickr.

I had a really nice Starck watch from Fossil. I took it to the jewellers to get the battery changed and they said it would still be waterproof if they did it. Unfortunately it wasn’t, and that was the end of that watch.

I got some polaroid film from a boot fair for £1 a box. Half of the pictures came out black. I have a feeling that I took them in the toilets at the manor club.

I will have to find what I did with the pages I kept. Basically they were wobbly funny drunk illustrations of various friends’ bands, and I’m not sure who drew them.