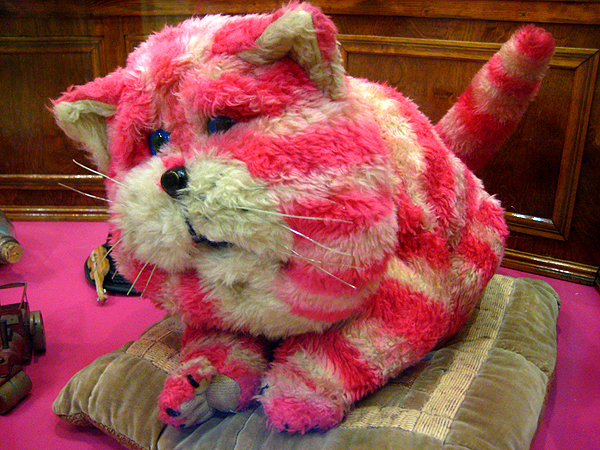 I also didn’t put my pictures from Canterbury Museum up. Here is Bagpuss on his cushion, he has an honourary doctorate from the University of Kent you know. In real life, he’s about the size you’d expect.

You know originally he was going to be ginger, but the fabric dye came out wrong, but they liked the pink and just went with it. He wouldn’t be the same in ginger.

Here’s me and his eminency.

The Clangers were bigger than I expected, about a foot tall. You can see the glue on them in a lot of places too!

Here are the other toys from Bagpuss.

My mum tipped me off about the existence of the museum, she saw the shop one day and bought me a toy of one of the Mouse Organ mice for xmas, because Bagpuss was my favourite show when I was little.

Noggin the Nog, who is literally made of pieces of painted carboard.

And Ivor the Engine, which was probably my least favourite Postgate production as a kid.

They also had a Rupert the Bear gallery, because he’s local.

I wish this were a commonly available drink. It’s one of those mini cans they used to sell in Woolies.