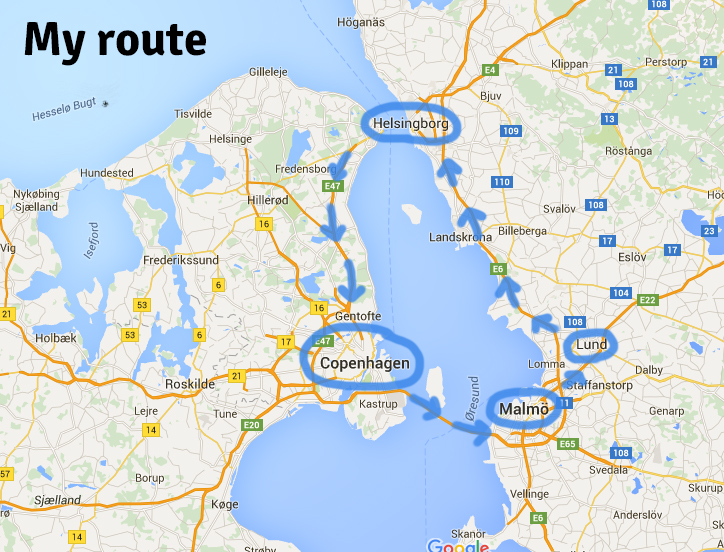 Here are some more (long overdue) pictures from my Scandinavian trip in the summer. You can see the previous ones here. I was staying in Copenhagen, but the Swedish region of Skåne is a very short distance away, and so Sweden beckoned. In fact the plot of the ultra-popular detective show the Bridge relies on how close together Copenhagen and Malmö are while being in separate countries (if you haven’t watched it, you definitely need to- the first two series are here on Netflix). I discovered that the local Swedish train company does an Öresund Rundt ticket, which costs around £20, and gives you one bridge crossing, one ferry crossing, and unlimited train travel along the coasts. This seemed like a bargain (and you can split the journey over two days if you like).

You have to decide whether you’re going to travel clockwise or anti-clockwise. I decided to go by bridge, and return by ferry, as I wanted to go to the Lousiana Art Museum in Denmark on the way back, and they had late opening that day, and I’d heard catering for vegetarian food was better in Sweden (I was a little sick of the Danish tendency to slather everything in bacon and remoulade at this point). I’m not going to write in great detail in this post, because I’m also writing a zine about the trip.

Due to the ticket being issued by Skånetrafiken in Sweden, I couldn’t buy it from the machines in Copenhagen Central Station, and had to track down a tourist information shop. The ticket was easily bought though, and I was soon on my way to Sweden, armed with some pastries and an elderflower slushpuppy. I was expecting spectacular views for photographs, but I forgot of course that the train runs under the bridge (I don’t know how I forgot, seeing as the first series finale of the tv show featured it heavily). I also crossed in blazing sunshine on a summer’s day, and didn’t encounter any murder victims. I didn’t have the incomprehensible lyriced theme song to listen to either. I soon arrived in Malmö. 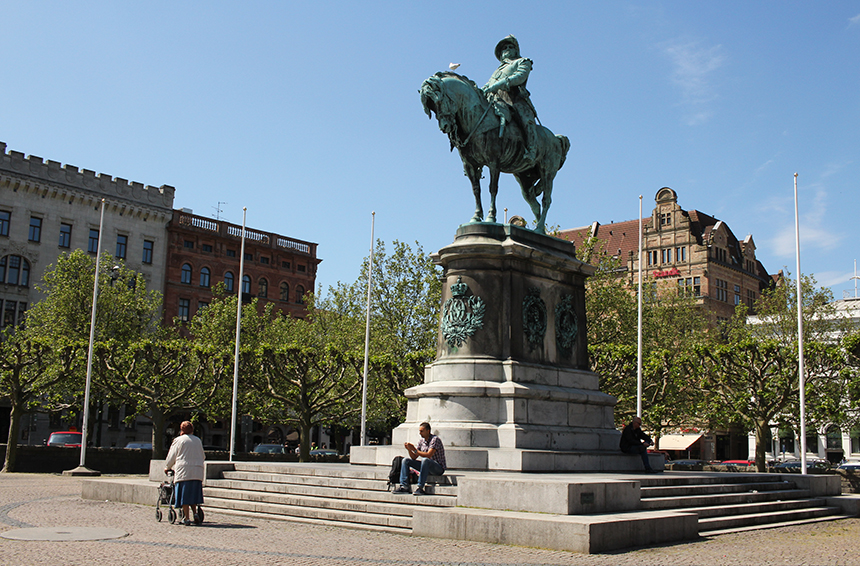 The Bridge also gives the impression that Malmö is a gritty industrial city full of modern buildings, I guess to give some contrast with Copenhagen. The city centre itself is actually quite historical, with a harbour area, some big squares and a pretty old town area. 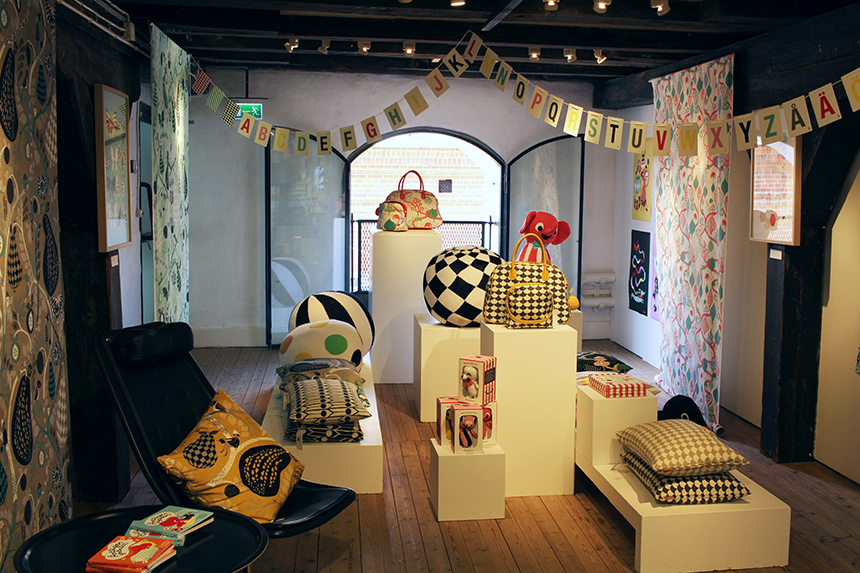 I had a look around this really nice art/design/book shop in a gallery in one of the historical buildings. I couldn’t afford to buy much, but I bought a few postcards. Summer 2015 turned out to be a good time to visit Denmark and Sweden. I was getting 10 Danish krone to £1 and 12 Swedish ones, but the normal exchange rate is more like 8 & 10. This meant that everything in these normally expensive countries was reasonably priced, and also easy to work out the exchange rate. I even ended up buying a pair of shoes in Malmö because it was cheaper than home (I paid about £25 for a natural coloured pair of these). I decided to move on to Lund, a university town on the route, because I thought it would be a good place to get vegetarian food. On my way out, I used the toilet in the station and was slightly amused at how it was decorated with IKEA furnishings. 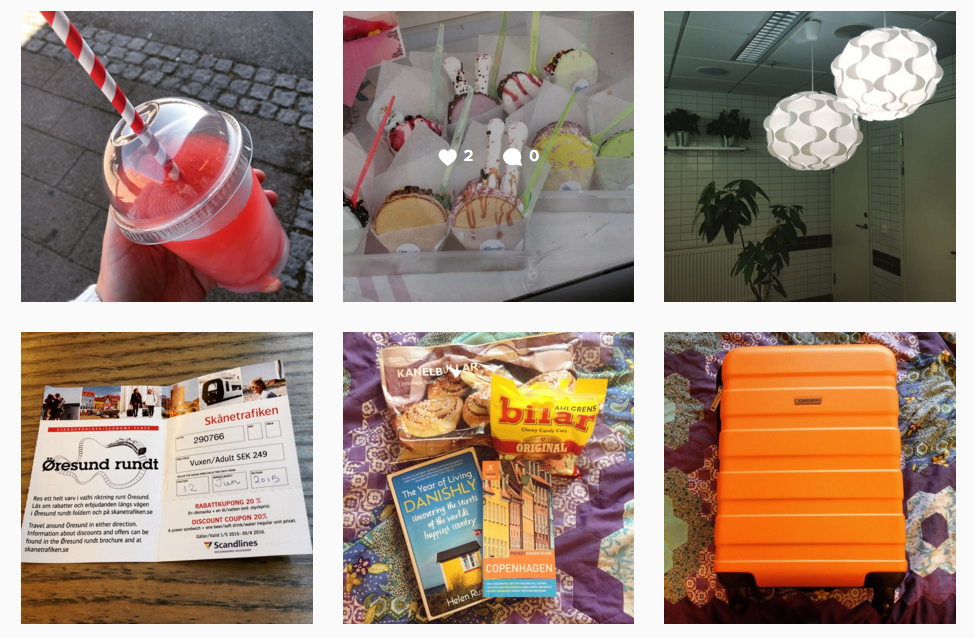 I managed to arrive in Lund on a graduation day, at the very point where lots of students were milling around after the ceremony, wearing their graduation outfit of formal wear and a sailor’s hat. Lund is basically the Swedish Oxford. I ended up putting my camera away, because it was a magnet for people coming up to me and giving me their camera for a graduation shot in front of some of the historic university buildings, and after I’d done that a few times I wanted to move on. I guess they must have thought I looked like I knew what was doing (hah!).  I then switched to Instagram for a few shots, as above. Due to a lot of the cafes being full of students and their families, I ended up eating at a Hare Krishna self-service cafeteria called Govinda’s, the food was pretty decent and very cheap, and I got to eat it in a sunny courtyard, but obviously it’s not what you’d chose for a graduation meal.

After that I had another slush puppy, this time lingonberry flavoured, and tried an ice cream that came between two macaroons. It looked much better than it tasted, the icecream was softserve and it was too sickly to finish. Lund was very pleasant, maybe a bit quiet, and had quite a lot of expensive but solidly respectable type shops. After a good wander, it was time to move on. I considered stopping off at Landskrona, a decaying seaside town with a pretty island, but that would have cut into my museum time later, and I’d heard the museum was spectacular. So to Helsingborg it was. (You can also see my gruelling pre-trip training programme and cabin-luggage sized approved case here, and the IKEA lampshades in Malmö station- I have the lamp version in orange.) 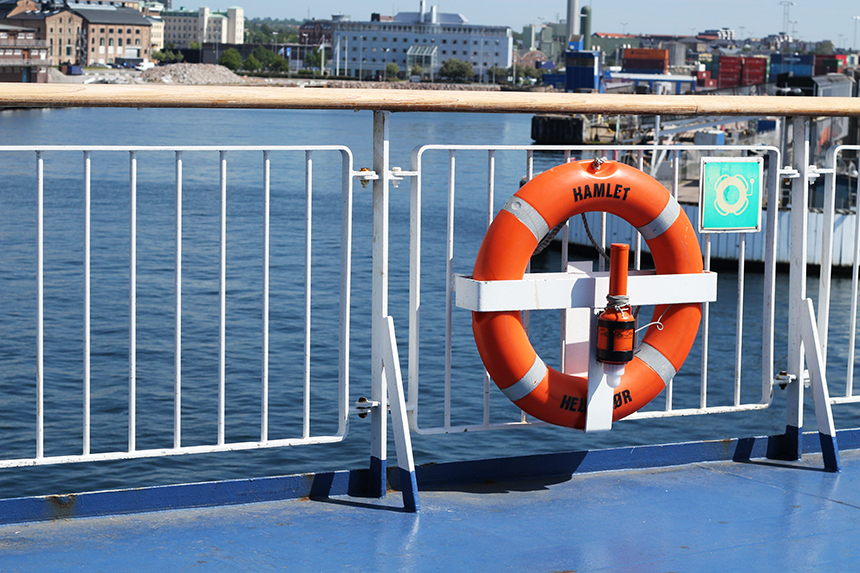 I didn’t actually get to see anything of Helsingborg. The train station and the ferry port are the same building, and there was a ferry leaving in five minutes. As the boat was also named Hamlet, I couldn’t resist. 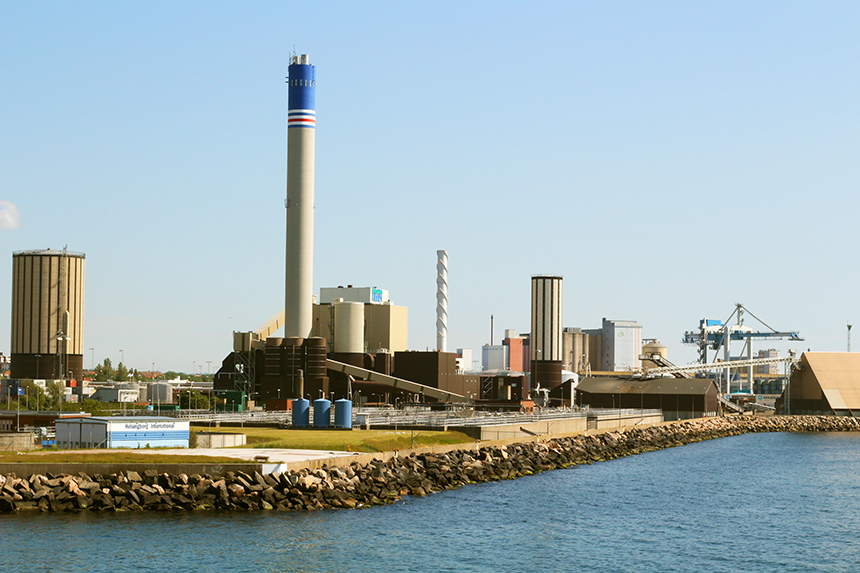 This industrial area was really all I got to see of Helsingborg. Another time maybe. The crossing took about 20 minutes and the sea was smooth. I enjoyed standing on deck in the sunshine and the fresh air, feeling the sea wind. I grew up travelling to France a lot on the ferry, in the days before the tunnel and immediately after the tunnel opened and was too expensive, and I don’t get seasick easily, but it’d been a while since I’d been on a boat anywhere than the Thames (I love going on boats). A lot of the other passengers excitedly took advantage of the fact that the bar sold beer at Danish prices, much cheaper than in Sweden. I imagine in the opposite direction a lot of people stock up with beer. 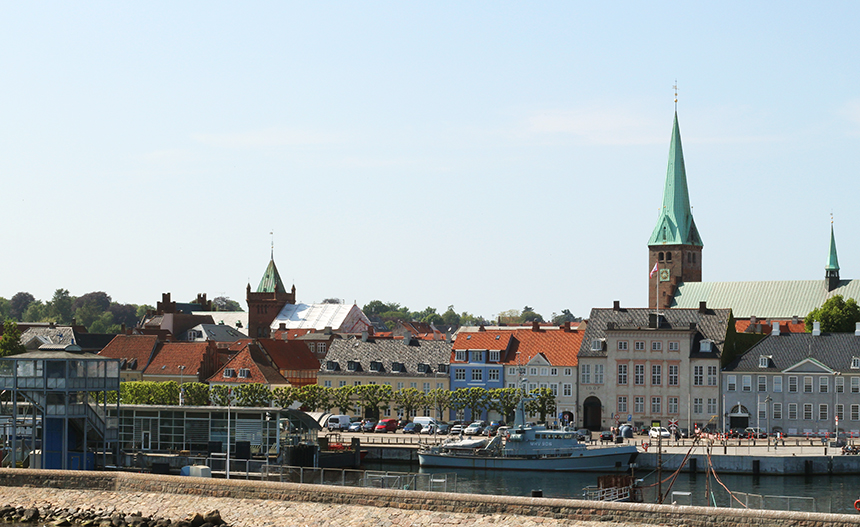 Here I was in Helsingør, home of Hamlet. Kronborg castle used as the setting for the play is a bit further along the waterfront, but they were digging up nearly all of the path and it was difficult to figure out how to physically get there, so after attempting to walk there and nearly falling in a ditch, I had to admire it from afar. Instead I had a wander around the town, and bought some snacks from the supermarket. 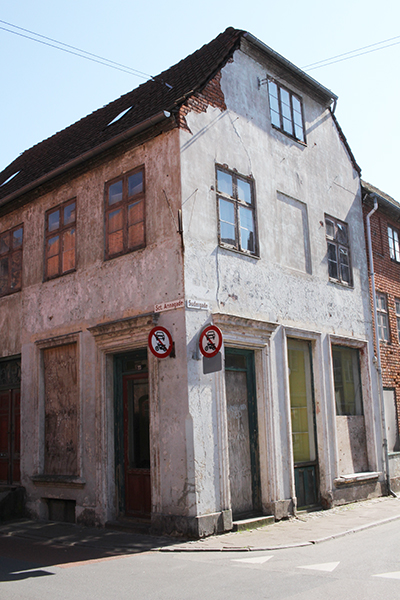 If Roskilde strongly reminded me of provincial Southern England, then Helsingør reminded me of Normandy, another place I know well. I liked the town a lot, there was a good relaxed feeling about the place, and lots of slightly shabby old buildings and people sitting out in the street eating and drinking. 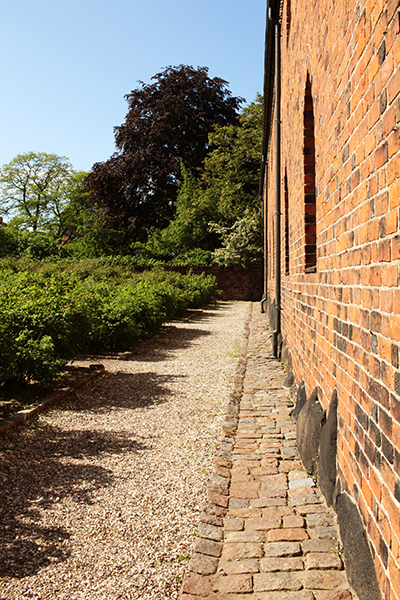 After having a wander around this cloister, I headed back to the train station to get a train to Humlebæk, the town just outside Copenhagen where the Louisiana Art Museum is. Things got a bit confusing at this point. Helsingør is the end of the line, and they seemed to take a free and easy approach to what platforms trains were going from. I got on a train that changed its destination at the last minute, and I had to jump off at the last possible minute with quite a few other confused Danish people. I hung around a bit, and got another elderflower slush puppy from the ubiquitous 7-11 shop in the station, and eventually got on a train that I was fairly confident was going in the right direction. This train was packed, I guess with other people hedging their bets that it actually went to the right place. In the end I got to Humlebæk fine. The Louisiana was incredible, and I took a lot of pictures, so I’ll write about it in another entry.