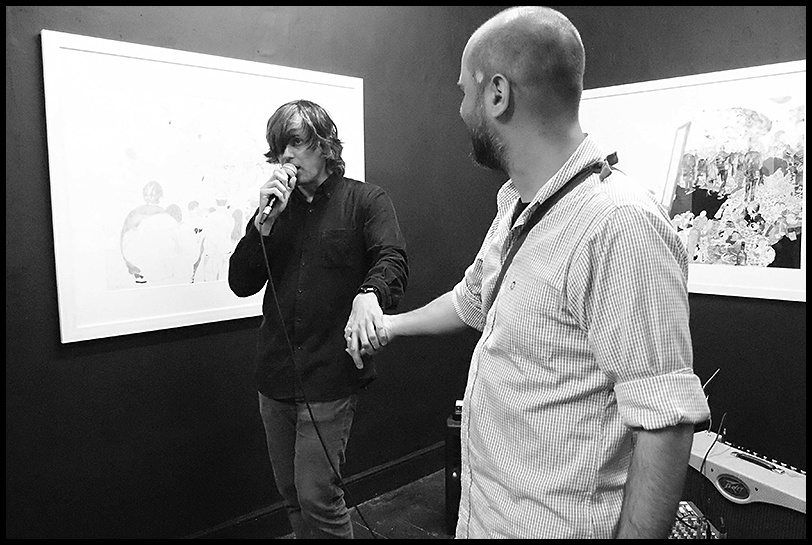 I went to an art/music event this week organised by painter/illustrator Stefanos Rokos. He’s an artist friend of Ellina’s from back in Athens who is currently holding an exhibition in London. The idea was that every Thursday, there would be music performances in the gallery. The musicians are all friends of Stef’s, and they each created a piece of music that related to the paintings. The paintings are large and full of fine details ideal for creating stories from. First up was Matt Friedberger of the Fiery Furnaces, who was going to perform some spoken word pieces over a background track. Next week is Stef Carlens, ex of dEUS.

The gallery’s PA had broken down, and someone seemed to have tried to fix things by putting the mic through a guitar amp. That doesn’t really work, especially for spoken word stuff. Matt was telling stories and pointing out details in the paintings, but you couldn’t make out what he was saying half the time, which of course spoiled the effect.

The gallery has some kind of connection with a hotel, and they held another event there the following night, with Jim Sclavunos from the Bad Seeds djing ( a strange mix of Iggy Pop and novelty jazz records), and a repeat of the music. It was quite a  surreal experience. I don’t really drink in fancy hotels anyway, it not being in the budget. Also, on the way there, we stopped off to get some food, and eat it in a little park, the sort where office workers go to eat sandwiches. There was a crown green bowls contest going on in the middle of the financial district. We felt very civilised, watching bowls before going to socialise in a hotel.

The hotel bar was on a balcony high up on the inside wall of the hotel. It was done up like a rainforest, with an led-lit waterfall. There is a music video from the late 90s where Jennifer Lopez has a shower in the rainforest. It reminded me of that. The greeks liked the fact you could smoke in the bar. For some reason both an enormous cocktail or a spirit with a mixer both cost £10. If I can only afford one drink I’ll go for the huge piña colada.

Some kind of cocktail ingredient/Borgia poison.

The menu claimed that the drink on the left was limited to one per guest. I don’t know why, or how they would enforce that.

This was above the balcony. My brain couldn’t quite figure out how the building was put together when you compared the views from the balcony, room and street.

The music performances were in some kind of hotel lounge. It had a framed cupboard of booze, and a pool table, and a couple of artfully placed Bowie records on a table, and they’d hung one of Stef’s paintings on the wall. It was like being in a very expensive living room.

Matt sat in a chair and repeated his performance. This time you could actually hear the pieces and they were enjoyable. The paintings weren’t there for him to point at though. You win some, you lose some.

The painting. The only one from the set that wasn’t featured in the night’s music. I went back to the bar to get a glass of water, and it was suddenly full of the sort of people who can afford to drink in hotel cocktail bars. They smelt of terrifyingly expensive toiletries. Then when I walked past again, it was suddenly closed.