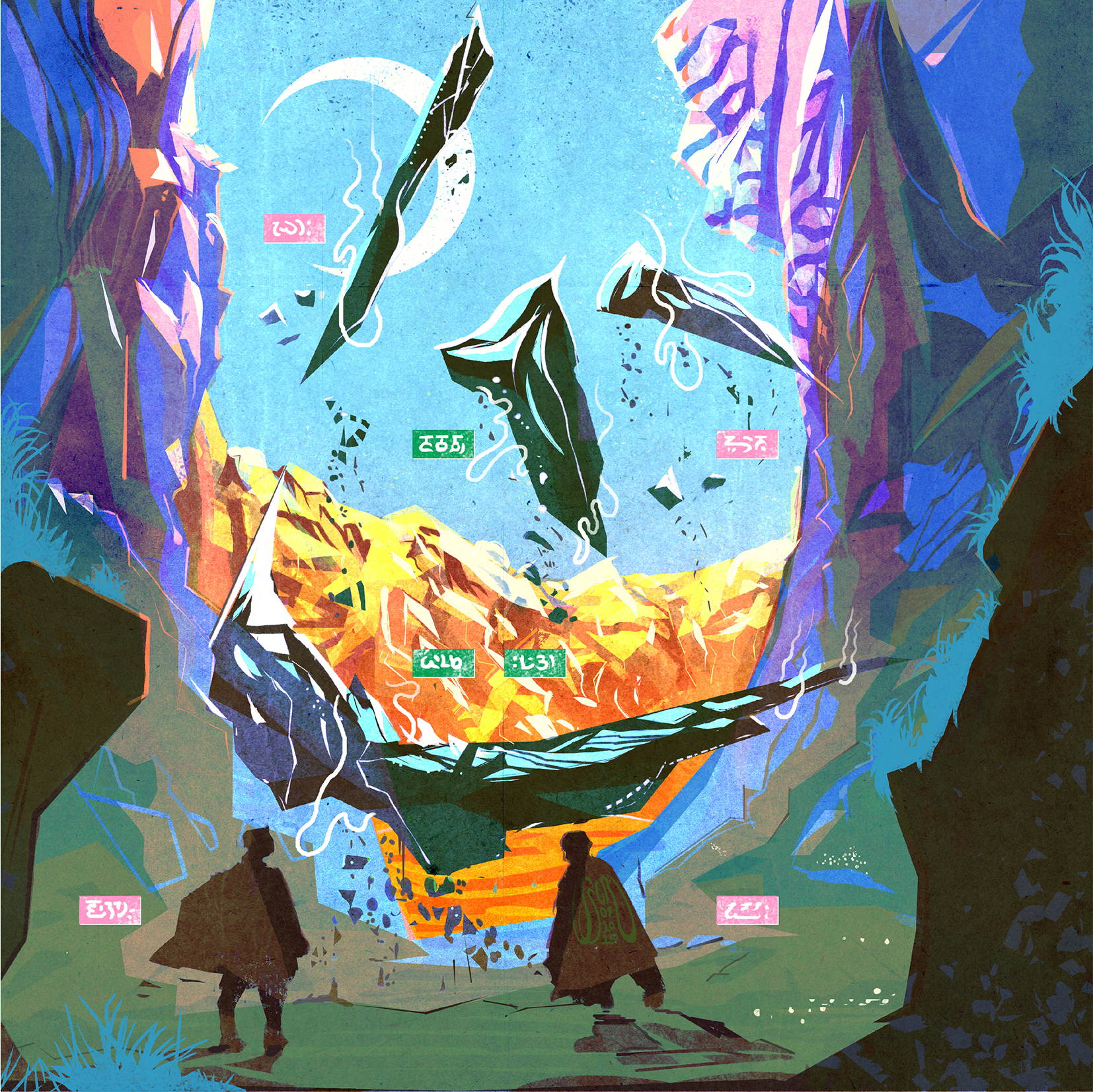 A short interview with my friend, illustrator Sajan Rai. I first met Sajan when we were assigned adjoining tables at a zine fair, and he was offering to draw people as sloths for £5. This clearly being a sign that he was the right kind of person, we became friends. You can find his website here sajanrai.co.uk

1. Tell us a little bit about who you are, and what you do

I’m an illustrator dipping my fingers into different projects, but for the past 3+ years I’ve largely been developing my work by writing and illustrating haiku poetry. It’s a nice way of creating small one-shot scenes inhabiting the same world. The project  gives me freedom to experiment artistically, and create narratives I can revisit at my own comfort.

2. What are some of your influences and inspirations?

I think Gary Larson’s influence has been pretty consistent, from when I was solely making slap-and-dash absurdist comics to the more illustrative stuff I’m producing now – I really love scenes born out of single-panel stuff. Brad Neely has done some great stuff in the same vein too (unfortunately they’re not on his website anymore but some are on his instagram.

Visually, I grew up looking at lots of Paul Klee, and I really admire the variety of his work. Jean-Michael Basquiat’s also took a lot of those elements I love and put them in single pieces – large strokes, textures and annotations all in varying proportions. Watching lots of old TV and film, technicolour stuff like original Star Trek and 60’s Batman, may be to blame for my palettes. I’m grateful my parents and brother showed me all these things! They’re also creative (and all good artists too) – having that kind of environment as well as encouraging grandparents has been a massive privilege.

3. What are you currently working on?

Mostly some commissions, I’m also tentatively crafting a short art workshop/course I could teach in small groups over zoom – but need to gauge interest and actually develop it.

I’ve also made an online exhibition with Kinga Dukaj (I drew it, she’s done all the tricky stuff) for the CBA magazine I was main editor for. Other than that, I have quite a few project ideas but I’m not sure which to pursue – I’m rather good at bamboozling myself. I might finally start a webcomic? I started last year, but found myself overthinking and overworking the first couple of pages and shelved it.

I’ve also been having fun doing some very lazy/relaxed animating and would like to keep that up and see if I can do something with it down the line.

4. How have things been for you with the pandemic?

Other than missing my family/feeling demoralised by people’s complacency, surprisingly okay. I’m grateful that commissions and freelance have been relatively steady, which is just as well considering the lack of comic conventions. Doing those were also nice way for me to grow as an artist – they provided deadlines for my own projects,  and I miss having nice conversations with customers. That said, It’s also been nice to have a break. I’ve been doing those for a while, and combined with other circumstances I found myself travelling a lot more than was probably healthy for me in ’19.

5. Are there any new mediums or methods you’d like to try with your work?

I’d like to learn Blender properly, so that I can consider more unusual and obnoxious ways of  incorporating 3d assets into my illustration. I think messing around with software other than Procreate/Photoshop is something I haven’t done in a while – collaging elements made in seperate programs is a solid way to get weird and unique results.

6. What do you find are the biggest barriers preventing you from doing all the projects you’d like to?

The personal labour that comes with being a single person – stuff like time and energy – which all boils down to being one person rather than a studio of clones. And even more than that: concentration –  focusing on one project at a time. Which is hard when I’m constantly distracting myself with new ideas. One hurdle I’ve managed to get over recently was collaborating! In the past I’ve honestly found it frustrating, but I managed to work with Nanami Takeuchi on a comic for the CBA magazine which was just released! which was still challenging but really fun. So, It’s something I’m (tentatively) more open to now.

7. What projects are you hoping to work on in the future?

I have a bunch of different ideas I could pursue right now! Aforementioned webcomic, poster designs, some off-shoot projects based off the worldbuilding I’ve done through my illustrated haiku project. Also, I’d like to neatly package some pitchable stuff and attempt to throw it at some publishers, as that’s not something I’ve tried.

8. Recommend some things for the blog readers to check out

I like learning about and looking at all the small things scurrying about in the world. A photographer called Andy Murray (not the tennis player) has a nice site called Chaos of Delight, and there’s a great and relaxing youtube channel called Journey to the Microcosmos which features amazing microscopic footage and is really digestible.

There’s also a couple of browser games I’d recommend – I’ve only played the trial of Nathalie Lawhead’s Tetrageddon but its seems like this genius masterwork that lets you surf through a nightmare version of an old-style internet laden with occult-like computer viruses. I haven’t even tried the full version yet, but I love everything about it. They’ve written up quite a bit about it here. It’s a vastly artistic project, executed amazingly, and I’m looking forward to exploring it.

On a slightly more more lo-fi side, there’s a deeply NSFW choose-your-own-adventure Star Wars fanfic made by Terome Mcnally (and pals?) which I think about a lot. It’s called ‘How did Chewbacca get his WOOKIE BOWCASTER?’ and it’s really good, hilarious and utterly nauseating. I adore it.