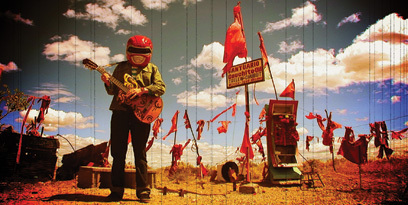 I finally saw this film today. I’d wanted to see it since I’d heard of its existence, but not got round to it, but it was definitely worth the wait. Gruff Rhys from the Super Furry Animals saw a singer on Welsh tv in the 70s who used to go onstage wearing a poncho and riding a horse, and then sing flamenco and samba songs in Welsh with an Argentinian accent, and he was spellbound. His grandmother told him it was René Griffiths, a distant uncle of his from South America. An ancestor of his in the 1800s joined the Welsh colony in Patagonia after accidentally killing his cousin in a rigged horse race.

A couple of years ago he was given the chance to make a film while promoting his solo album, and he decided to go over to Argentina to track down his relative and see some of the parts of the country that still speak Welsh, and play his music along the way. The resulting film is really charming, a sort of gentle psychedelic road trip, like a cosy version of El Topo with added music and social commentary. Gruff Rhys has always seemed like a very affable man. He plays his own music in the film (sometimes to audiences of bemused old Welsh-Argentinian old ladies), and also befriends other musicians along the way, and includes their performances. The film’s in Welsh, English and Spanish (and a tiny bit of Portuguese), with English subtitles on the non-English parts. You also get to hear a lot of South American Welsh, not something you see on screen much.