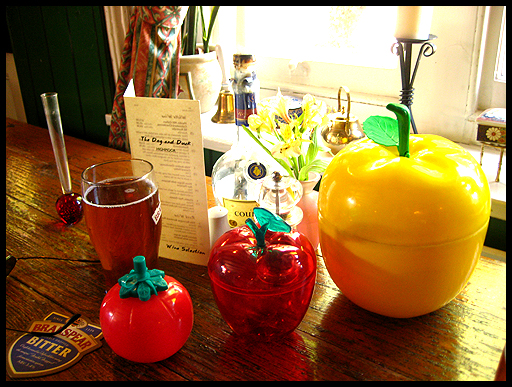 So on Saturday I went to the Sue Ryder hospice sale in Oxfordshire whilst Chris was at work, a treasure trove as always.

I got the aforementioned apple ice bucket, this complete dinner service & coffee set for £8 (which I then had to lug back to Brighton on the engineering works train journey from hell on Sunday), and loads of greatest hits albums like OMD, Roxy Music and Dolly Parton (is there something wrong with liking Orchestral Manoevres in the Dark?), also a book about crochet and some Johnny Cash records for Chris.

After that we went to the pub on the way back, which is mandatory usually, and met up with some other people we know. Sarah got annoyed because they covered her supposedly vegan food in cheese, and she had to send it back, and then they tried to do her out of the bread that was supposed to come with it. Ian’s little boy, A. put that sticker on his head.

Then me & Sarah had a play on the swings. Muz on the left. Isn’t Sarah’s coat the best thing ever?

A. is a little daredevil, his dad’s got him doing gymnastics in the garden to use up his extra energy. Ian also told us about a girl in his daughter’s class at pre-school who’s got the same surname as them, but she’s called Pelican and her brother’s called Magic. PELICAN!