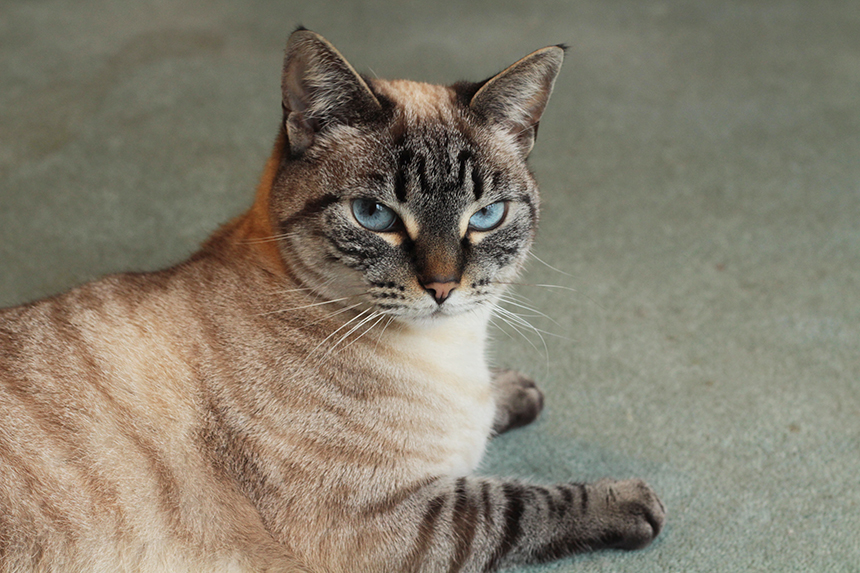 That cat’s something I can’t explain

I don’t currently have any pets. Landlords in London who allow cats or dogs are a rare breed. My housemate has a tropical aquarium, and I don’t fancy getting hamsters or mice, and don’t have space for rats. So no pets other than fish for us.

My mum has two cats, Oscar and Mitzi. Oscar decided at some point I was his person, and he gets very disappointed when I visit and turn out to not be moving in. I got his hopes up too much when I housesat for a couple of weeks in 2013. They are brother and sister, from the same litter. The mother is a Bengal cat, the father a Siamese. Oscar has come out almost completely Siamese though.

My mum retired and came into some money, and bought a house in a small town in France, so the cats now have their own passports. (Small french towns are full of older english people- all the young french people want to go Paris or London.) There’s an english family who live on a farm near her, who have a really friendly ragged old ginger barn cat named Henry. Henry likes to come in to my mum’s place, and sleep on the bed or sofa with her two cats (as close as they will let him- Henry gets flea treatments, so it’s ok if they did) and have a taste of their food. Oscar and Mitzi don’t get aggressive or territorial with him, they just sit there with mortified politeness like they’re going “well we didn’t invite him, but it would be rude to throw him out, can’t you do something?” like they’re children whose parents have organised a playdate with another kid they don’t like, while Henry purrs away like a rusty engine.

This is Mitzi. She enjoys shamelessly posing for photos, because she knows she’s pretty. She doesn’t meow so much as squeak at you, and being incredibly nosy, she likes to follow you round the house having an in-depth conversation in squeaks and meows. I think she thinks humans understand what she’s saying. She also likes to make an upwards chirping noise when she jumps up, and a corresponding downwards one when she jumps down, so you know what direction she’s going; nip people’s toes (leading to her nickname Nipsy) and hassle any visitor to lavish attention on her.

Her main interest is watching tv shows with dancing in. My mum is a big fan of Strictly and other tv talent shows, and the cat never misses an episode. I don’t really like them, and last time I visited, I went and had a bath while it was on. Mitzi was outside the bathroom door, frantically meowing at me “you’re missing it! come on!”. When I was looking after her once while my mum was away, I watched a film about the rehearsals for and the famous riot at the première of the Rite of Spring. Mitzi’s normally pretty unfazed about most things on tv; gunshots and shouting don’t seem to bother her. However once the music in the ballet started, she jumped bolt upright, with a look on her face like “No! It can’t be!” and ran away and hid in the kitchen until the film was over. I guess she has a pre-1913 mind. For quite a while, the Festival Hall in London had a piece of sound art playing in the toilets, where Portuguese artist João Penalva had recorded himself whistling the music (there’s an interview with him in the link too) from the ballet, which was pretty eerie sounding. It made me want to laugh so hard every time I was in there though, picturing the cat’s expression. That would have been a hard one to explain to people.

Oscar is a grumpy old man at the ripe age of 4. He never bites or scratches, but he sulks hard. His main hobby is lurking behind furniture. He also enjoys a good belly rub, and is all round a giant cuddly wuss who tries to pretend he’s not. He likes to pretend he’s the alpha cat around the house, but he’s scared of most strangers, and nearly all other animals. He agitates to go out when he sees birds, but when he’s let out he realises the birds are just a little too big, or the grass is just too wet, and then he cries to come in. Cats are a native species in the UK and France, and the local birds just laugh at them, the bolder ones even going so far as to taunt soft domestic cats. To prove his toughness though, he likes to bring in feathers from the garden and then elaborately wash them, as if to say “oh yeah, I totally caught a huge bird out there, but it was just too big to bring indoors”.

Oscar is also fascinated by water. He insists on drinking from the tap whenever possible, and when he was a kitten, he fell in a running bath and had to be rescued and dried off, because he got a bit too curious about the running tap. He has a complainy sort of meow that sounds like he wants to speak the the manager (you just can’t get the staff these days). He learnt how to open the fridge, but luckily as all the food inside was so substandard and unworthy of such an important cat, he didn’t bother to eat it.