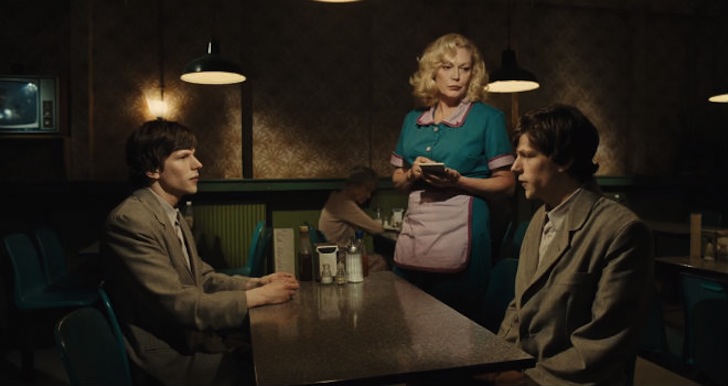 I went to see the Double a little while ago. My friend Ellina has thing about Jesse Eisenberg and she wanted to see it. I haven’t been going to the cinema often enough recently. I like Dostoyevsky, enjoyed Submarine, and liked Jesse Eisenberg as an unbearable teenage boy in the Squid and the Whale so it was a good choice. The film owes a lot to Terry Gilliam’s Brazil, but it’s definitely worth a watch.

My main qualm however was that Hannah is not really developed as a character. It starts off well, one of the first things she says is that it annoys her that a man “doesn’t even know me”, but you never do find out more about her, she only reacts to things male characters do, and is almost like a prize to be won.

Beforehand we went for some pizza, and they were playing Dinosaur Jr in the pizza place, and then J Mascis turned up as a cameo in the film, which was nice.