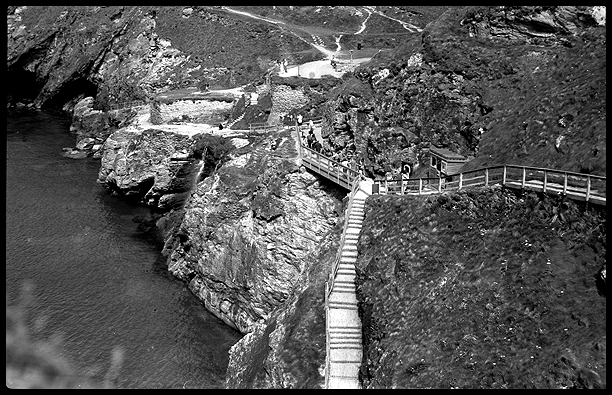 My ex-boyfriend’s family used to go to Cornwall every summer, and we used to join them, me usually lugging a whole load of photo stuff on the train down. These were taken at Tintagel.

After we’d been round the castle, we were having a look round the bookshop in the village, which was a strange combination of normal bookshop, ice cream shop and hippy shop (lots of tourists there for King Arthur), when an Italian man asked the owner/assistant/whatever if they had a fancy edition of the Morte D’Arthur for a gift for a friend who was an English Professor. The shop person said that they didn’t have one, and told him he should buy Mists of Avalon instead and then went on and on about how it was more mystical and feminine and how everyone should read it, despite the Italian man politely trying to get a word in edgeways to try to explain that it wasn’t what it was looking for at all, and his friend was a specialist in Mediaeval English, so he’d prefer something actually from the period please. It was pretty funny, but also made you want to bang your head into a wall.

The Moskva 5 is possibly the world’s most awkward camera. I got mine in a junkshop in Tallin for about £15, and it looks amazing however. It weighs a ton and must be used with a tripod. It doesn’t take the normal tripod screws though, some special larger soviet size instead, so I had to get an adaptor off ebay, which tends to get jammed onto my tripod easily. You also need to use a shutter release to fire the shutter, because the button is useless (according to the internet, the buttons pretty much never work) and the rangefinder for focusing and the viewfinder for composing are totally different windows. It seems they started off designing the camera for left-handed use and then changed their mind halfway through for extra awkwardness. If you have the rectangular mask in you only get 5-6 pictures per roll of 120 film, and you need a handheld light meter, as there’s no built in one When I’ve got the thing on the tripod with the shutter release hanging off and both hands reaching round and peering from one window to the other and holding the light meter up I feel like I might as well go the whole hog and get a black hood and pan full of magnesium powder (and a ‘tache to curl). The film I used that day had also been in a hot car, hence the strange marks. I should get round to using this camera again, I think it’s the only time I’ve ever used it. I’d actually scanned these before, but the film had curled up, and now it’s been pressed flat for a couple of years, so I got much better results.