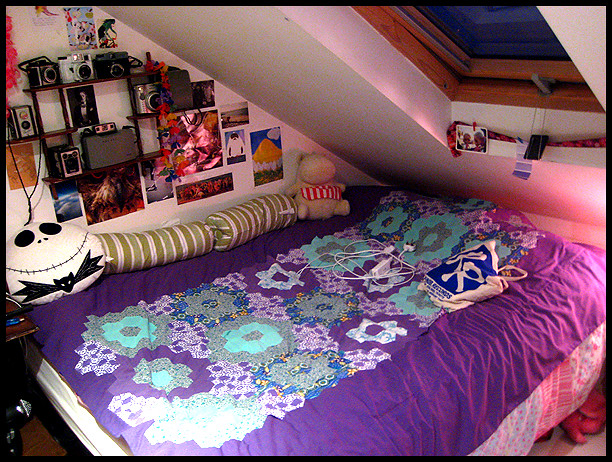 I got into the art MA, so at the end of the month I’m moving out of here, putting my stuff in storage and spending the summer bumming round my mum’s to save money (with a quick jaunt out to work for a week in Vienna). I thought I’d take some pictures, seeing as how the room is pretty tidy, as I had to show my possible replacements round. In many ways it’s an amazing room, but the total lack of vertical space and storage space can be a real pain in the arse. Excuse the slightly fuzzy photos, my compact camera is old and decrepit and doesn’t focus like it used to.

Here’s what you see when you come up the stairs (the room’s in the attic). Sadly the picture isn’t peely like the record cover is.

Book nook on the landing.

On the left as you come in: sewing machine and horribly inadequate clothes rail. I just don’t really have anywhere I can fit a proper wardrobe, so the clothes rail has to go under the eaves. You can see how slopey the ceiling is in this picture.

Big comfortable chair whose frame I found in the street (I bought a cushion pad for it and made the cover). Behind the chair big heap of junk to be taken to the charity shop. On right some music stuffs. Big fluffy white flokati rug. I’ve actually got two, but the other one is folded up because it’s slightly too big for the remaining floor area. The horse thing came free with an Of Montreal album.

The second window of our tour. East Germany’s finest amplifier technology. It cost me £3 and is unfeasibly heavy for the power of amp. It’s probably stuffed with used plutonium coated in lead. Plugging anything into the input labelled low gain is a pointless endeavour.

Desk with slow old mac I use mainly for scanning film. I’ve got a laptop as well, which I’m typing this on. The chair was from a local second-hand place.

The cushion on the chair was going to be a handbag (folded over the other way) but then I couldn’t find any of those handles for knitted bags in a style I liked, so it turned into a back support cushion. That’s an Ordinance Survey map of E.Sussex on the wall/ceiling, for when I need to find my nearest ruined folly.

Bookcase full of useful bits. I bet you’re extremely jealous of my big gold book of Latin verbs. The chimp came free with the teabags. Usually the 2nd shelf is full of scrapbooks and sketchbooks and things, but they’re downstairs right now. The first big box is full of zines, the second full of camera lenses and stuff for developing film.

Next up, my dressing table. Which is actually meant to be a desk. The mirror came from Habitat and is apparently designed by Miss Piggy. Those are real lights, but I haven’t got enough sockets under the bed to plug them in. The Yellow Submarine lunchbox is full of jewellery.

Cheap IKEA bed with a wobbly leg. I would fix it, but I’ll be taking the bed apart in a few weeks anyway, so I can’t be bothered. Bedspread made by my nan, Nightmare Before Xmas cushion from the Disney Store. Moominmama and cameras from charity shops.

To the right of the bed, under the eaves, 70s coffee table piled with stuff. DAB radio exclusively for listening to 6 Music. (I used to like the birdsong one too, but they stopped doing that). I don’t actually like going to Glastonbury, too many people, I was given the bag. To the right, the books and records of my lifetime minus the books.

Why, yes, Emma that is a rather nice stereo. In my book, all audio equipment must have large chrome dials. The record player came from an advert in the back of the Grauniad (it badly MP3ises vinyl too) and the amp and speakers came from junk shops.

General bed area. Small tv for my viewing pleasure (big one downstairs belonging to my housemate).

Bunting and mirrorball on the (low) ceiling.