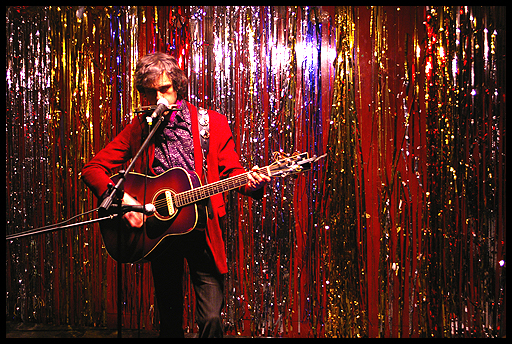 I shared a stall at the Alternative Press Fair at the start of Feb with my friends Scott and Chris, and their friend Pete who I hadn’t met before. Thanks to Jimi and Peter for organising such a great event.

It was in a hall in the basement of a church near Euston station, and it had the strangest lighting, so apologies to anyone who looks ill in the photos. There were also these strange xmas decorations on the ceiling.

There were lots of stalls, esp comics and colour art zines, not so many of the black and white photocopied ones like mine (I still made twenty quid though).

Here’s some nice stuff I saw.

(Joe)
Our friends Joe, Jess and Ricky came along, as did Ed, one of my fellow Brighton Zinefest Organisers.

We sat and had a drink quite often, because there was a bar, and there were four of us to mind the stall. That’s Ricky and his girlfriend there.

Here’s Chloe who I met at the Women’s Zinefest, and who then had the stall next to us. She didn’t really look quite so peaky, stupid lighting (there’s only so much photoshop can do)

Here’s our stall. We didn’t have my big loud table cloth like I usually do, because Scott was going to bring one, but then forgot. The table was covered with zines and comics, so it didn’t matter that much. The small zines nearest you are mine, Up a Blind Alley belongs to Scott, the Grey Comic belongs to Pete, and the furthest ones belong to Chris.

People started to pack up in the early evening, and there was then an open mike night. People did readings, I did some shameless plugging for the Brighton Zinefest, and this guy (whose name I sadly can’t remember) played some songs.