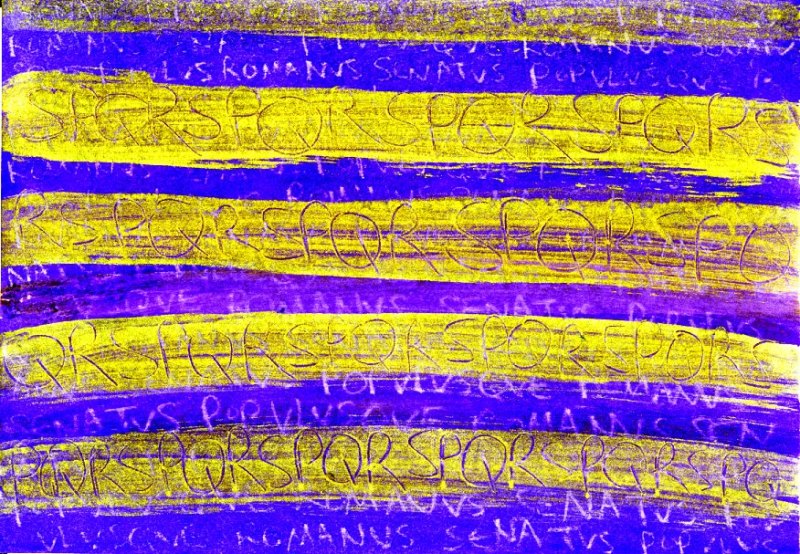 Caesar ‘ad some jam for tea

I haven’t updated this for a little while, and I’ve built up a backlog of things to write about

Things I need to write about:
Brighton Zinefest (I’ve got a whole heap of photos to sort out)
Typical Grrls II
University Work
Oliver Postgate Book
I’ve also got a whole load of films I need to scan.

I’ve been spending the last few days cutting out silhouettes and making wax-resist paintings for Moogie Wonderland. It’s going to be some animated films on the life of Caesar, and also how to tell your fortune via liver or bird. I need to do this stuff for uni anyway (well, not really need, I don’t have any set projects, more like should, or probably more like might as well), and their theme this time is the Ides of March, so it fits. It’s good to have deadlines to make me get off my lazy arse, but as always I go “Yeah! I want to do that! That sounds great!” and then about half an hour later melodramatically think “Oh shit, I’ve got to actually do it now! I’m going to be a horrific failure! I should just quit doing anything creative and go back to being a receptionist/junior accounts assistant! Woe is me!” and then end up doing whatever it was anyway because I don’t like to let people down. (With extra last minute perfectionist panic)

The animation will be done with silhouettes, taking inspiration from Lotte Reiniger, and the backgrounds are based on textiles. Newsagent wax crayons + drawing ink. It’s one of those things that looks hideous in the original (like bad 90s wallpaper), yet somehow scans better. Anyway I made a large pile of this sort of thing, with added colour variations via photoshop. Maybe I won’t use all of them. Hopefully I won’t feel inspired to throw anything on the floor and stamp on it.