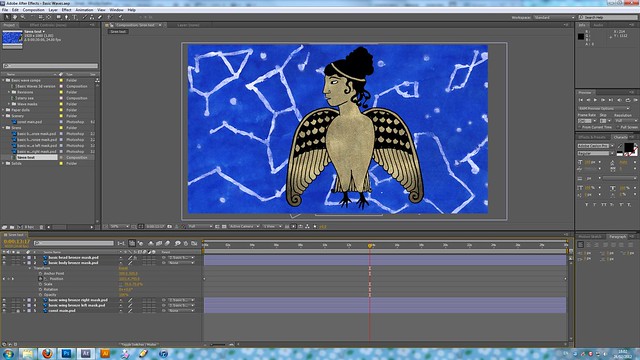 I made a test animation for one of the puppets from my uni project. The movement’s pretty rough, I’ll refine it later (I also need to clean up the masking). I just wanted to see if it worked. I’ve been rereading James Joyce’s Ulysses, and in the sirens section the barmaids are constantly described as “bronze gold”, so I made my sirens bronze coloured. Might as well. Ulysses is heavy going. I think reading it the way it originally appeared, as separate episodes is much more fun than ploughing through it as a book. I still think my favourite thing about it is that the equivalent of Penelope is constantly unfaithful. If you do a 3 month university course on Homeric epic, you get pretty tired of his character taglines (“faithful Penlope” “wily Odysseus” “wine-dark sea”) again and again. It’s not like you have to memorise the whole thing to recite at a feast like they did in 800BC.

After Effects owns my soul now it seems. Tedious program.