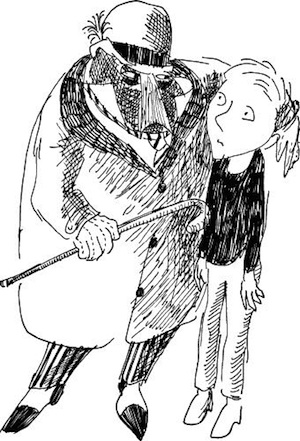 I recently watched this documentary about the Phantom Tollbooth, one of my favourite books when I was younger. (I still have the same battered, dog-eared paperback copy). Milo, the main character, is a boy who is always bored and doesn’t see the point in anything.

One day he comes home to a mysterious parcel containing a toy tollbooth, so he drives through it in his toy car, and finds himself on an adventure where most of the people and events are based on taking common English idioms very very literally. It’s a funny, clever and warm book which is very well loved (and has a not particularly great animated film version from the 60s with the boy from the Munsters which can be seen in full on Youtube these days) “Don’t you know anything at all about numbers?”

“NOT IMPORTANT!” roared the Dodecahedron, turning red with fury. “Could you have tea for two without the two — or three blind mice without the three? Would there be four corners of the earth if there weren’t a four? And how would you sail the seven seas without a seven?”

“All I meant was—” began Milo, but the Dodecahedron, overcome with emotion and shouting furiously, carried right on.

“If you had high hopes, how would you know how high they were? And did you know that narrow escapes come in all different widths? Would you travel the whole wide world without ever knowing how wide it was? And how could you do anything at long last,” he concluded, waving his arms over his head, “without knowing how long the last was? Why, numbers are the most beautiful and valuable things in the world. Just follow me and I’ll show you.” He turned on his heel and stalked off into the cave.”

I never really knew or had thought about the backstory of the book, and it turned out to be lovely. Norton Juster, the author, was a lecturer at an architecture school in New York in the early 60s. He was commissioned to write an educational book about town planning for children, but didn’t enjoy it at all, and hit a block.

To procrastinate, he wrote a children’s story instead, and cajoled his flatmate, political cartoonist Jules Feiffer, into drawing the illustrations by telling him that he wouldn’t be getting any more nice dinners cooked for him if he didn’t hand over some drawings. No-one thought the book would go anywhere, and so-called experts at the time said it was unsuitable for children, but here it is, a classic 50 years later. The two men are still great friends to this day, and come across like a pair of really great uncles in the documentary- Norton being small and round and genial, and Jules being tall and thin with a dry sense of humour. The film also has stop-motion animation and narration by David Hyde Pierce of Frasier and is well worth a watch.