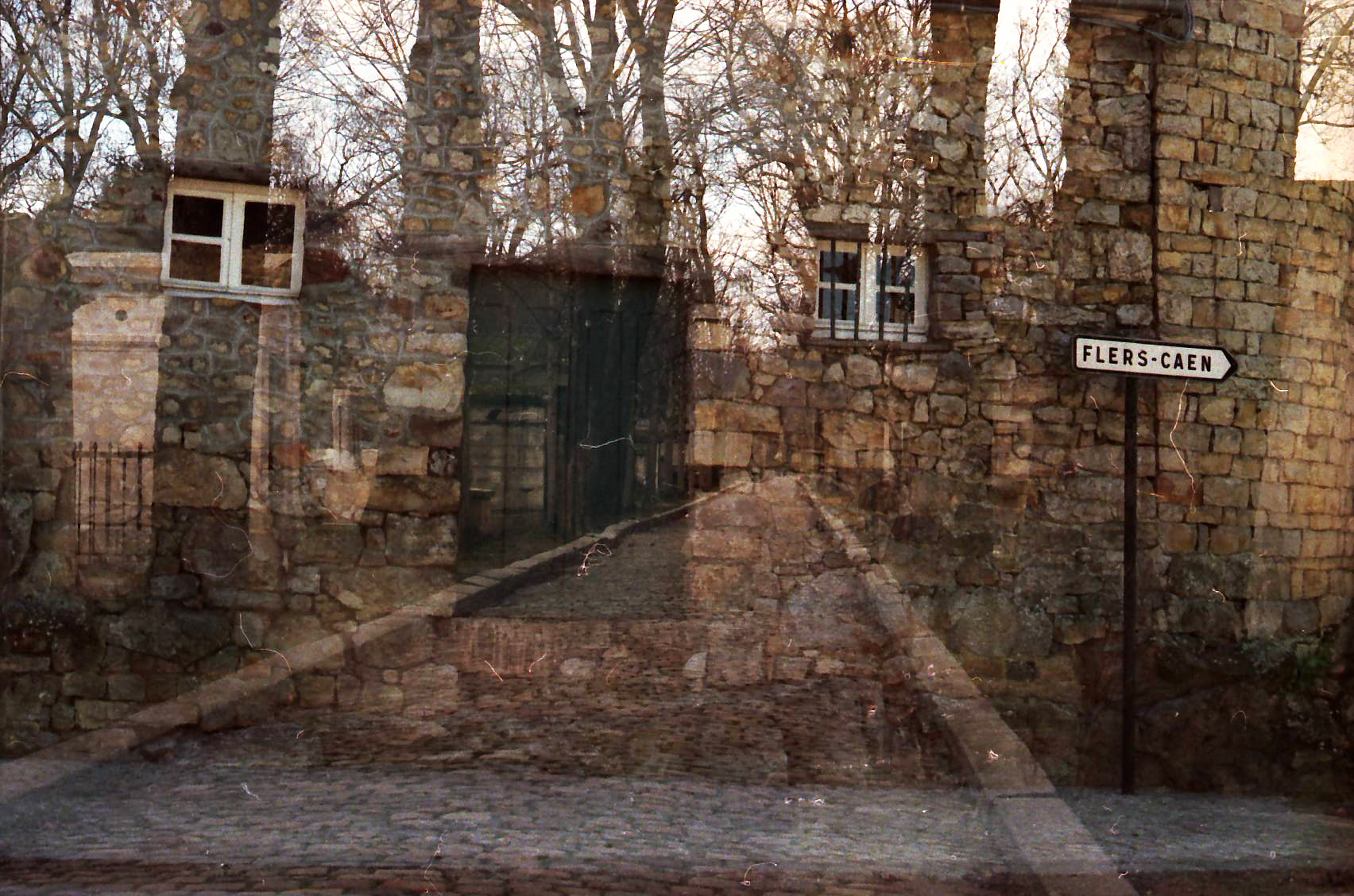 While I was in Paris I visited the famous Père Lachaise cemetery, and took a lot of photos both monochrome and colour, which I will post later. One roll, however, turned out to be half-used already and I ended up with double exposures. It turned out I’d already taken photos of a place called Domfront in Normandy with it. Domfront is a bit of a ghost town, which made me laugh to get double exposures of a literal graveyard over a figurative one.

Domfront is a really pretty historical town in Orne in France, which is seemingly dead. I was visiting my mum in Mayenne not too far away. She’d seen the old city walls of Domfront while driving past, and thought it might make a nice daytrip, being a historical town in a national forest. We walked around and looked at the impressive ruined Norman castle, and then tried to have some lunch. Everything was closed.

There were signs that there had been a thriving tourism industry that had given up the ghost in the early 2000s, but all the shops were abandoned (often with strange things like loads of plastic combs left abandoned in the windows), and there was no-one around on a sunny Saturday in the springtime. It was really strange, because the town is really charming, with cobbled streets and pretty old buildings everywhere, but seemingly unwanted.

Eventually we found a galette place. Galettes de sarrasin are a local speciality, a wholemeal buckwheat crepe folded up with melted cheese and whatever meat or vegetable fillings you want plus an optional fried egg. There are a lot of small cafés selling them in that part of France, and they’re usually both cheap and delicious, and quickly prepared absolutely fresh.

The galette shop had the local traditional lace curtains everywhere, framed posters from art exhibitions in Paris from the 80s, and lots of paintings hung up everywhere in random spots. It was eccentric looking, but in a cute way. I tried to order a ham and mushroom galette without the ham, because I’m vegetarian. The fact that the guy wouldn’t let me, and said I had to stick to the menu, should have got our alarm bells ringing about the quality of the cuisine, because the whole point of galettes is that they put in whatever filling you want.

In the end I ordered a potato and cheese one, and my mum got a ham one. While we were waiting for the food we heard the ominous ping of a microwave. A microwave is not required to fry a pancake and melt some cheese on it. My potatoes were both rubbery and bitter, which I didn’t know potatoes could be, and my mum’s ham was like a piece of old leather. We complained, and sent the food back, and the guy initially tried to give us a painting off the wall rather than waive the bill. Or maybe he tried to sell us the painting at a knock down price, it was kind of hard to tell. The painting was bad anyway, and I think it was one of his. We left Domfront not having spent any money, but hungry and irritable and glad to go to the supermarket. A real pity, because it’s such a pretty town, and I don’t know what happened to it. A case for Scooby Doo perhaps.