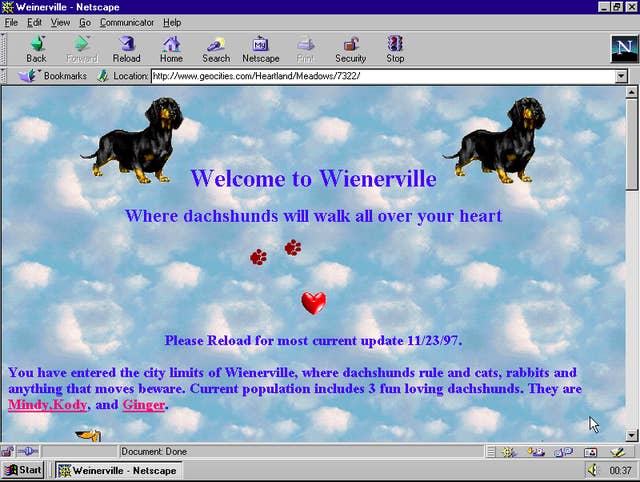 I miss the internet when it was weird

I haven’t updated this blog in about six months. Sometimes expressing yourself and being known is quite frankly terrifying. Since September I’ve spent a fair amount of time outside the UK, which is as I like it. Expect some photos from Italy, Austria and Germany.

Something I have been thinking about recently is how much the internet itself has changed in the past few years, possibly not for the better. I like the convenience of modern services like Google Maps or internet banking, but I actually think the level of interesting content on the internet has gone downhill.

I was born in 1985. When I was growing up, “going on the computer” was a specific activity that wasn’t really related to other things. You played a game, or did a school project from Encarta, or messed around on MS Paint. At school sometimes we played Lemmings or Arcventure, an archaeology simulator where when you found a mystery artefact, turned into a point and click puzzle game with a Roman or Viking theme (apparently coming back soon in a modern version).

I got the internet the following year at home, albeit dialup with limited time allowance per week. This was 1998 and social media didn’t exist. The internet was mostly enthusiast sites made on Geocities. Search was primitive, and I often found interesting things by looking at the Yahoo categories directory. It wasn’t even possible to doom-scroll. I looked up things like song lyrics or guitar tabs, which were on sites made by fans of those artists. It would probably blow the minds of a lot of kids now that often photos on these sites were scans of film photos, as scanners were more common than digital cameras at that point.

Youtube didn’t exist at this point. I once spent several evenings downloading a Placebo video that was split into three parts, and was the size of a postage stamp, and it felt like the future.

I met some penfriends (some of who I’m still in touch with 20+ years later!), and we would talk on primitive chat apps as well as send things in the post.

I had a look to see if any of the sites I remember from my early days of the internet were still around, and these ones are, and are still entertaining.

I spent my whole school career before social media was even a thing. Livejournal existed, but that wasn’t quite the same. The internet and the world were separate things. Friendster and then Myspace appeared in the mid 2000s when I was at university. I had an account, but it wasn’t really a big deal like it was for kids say five years or more younger than me, especially the back-combed scene kid types who seemed super into it. When Facebook arrived it seemed like the less loud obnoxious version of Myspace, without the bands.

I am really quite relieved I never had to deal with the sort of social media scrutiny that teenagers today have to face. I was on the train the other day and there were two girls of around fifteen or so who were looking at social media photos of another girl they knew and reviewing her face and weight and everything about her appearance. I felt torn between telling them to stop and the social norm of not talking to strangers, and then they got off the train.

Over the past ten years or so what is online has slowly slid more and more into being on the big social media platforms rather than people’s own sites. Everything is ephemeral and owned by the platform, and can be deleted at their discretion, following opaque and unclear guidelines, where for instance they will ignore you reporting neo-nazis being openly racist but writing “men are trash” gets you an auto-ban.

If you want a career in journalism or politics it’s almost compulsory now to be very active on Twitter. When you think about it, it’s actually really strange and unhealthy that it’s required to use a specific private company, who are completely uninterested in removing the trolls and sock puppet accounts who constantly harass other users. You have to put yourself up to a public gauntlet of abuse (possibly from paid troll farms in other countries) to be allowed to pursue a career.

Since most of the big social media sites introduced algorithmic feeds which choose what you see for you rather than just presenting everything in chronological order, it’s got dramatically worse. The algorithms favour “engagement” and controversy, so you see angry confrontations from strangers sometimes more than the mild updates from your friends you’re actually interested in. It feels like strangers are constantly shouting around you. There’s more “content” than ever before, but it’s continually harder to find things you actually like and enjoy rather than find stressful.

The siloing of everything onto big social media sites with algorithmic feeds ironically also makes it very hard to find old things you like, or seek out like-minded people. The options for a lot of specific interests now are either FB groups (which are dying in themselves) or private invite only Discord groups. Everything is monetised if possible, and the monetised things drown out the stuff that’s just for fun.

Social media now often feels like half the people there are in a race to perform to make money, gain mainstream social clout and outwit the pitiless algorithm, not to express themselves for the fun of it. In the worst case even things like accounts dedicated to social justice can turn out to be for clout-chasing or grifting money.

There’s also the issue of Uncle Terry. Before you could avoid him and his loud reactionary opinions at family weddings, but now he’s all over Facebook and Twitter being even more loudly ignorant. All the parents and grandparents and uncles and aunts are online now, it’s not the place you can go to hide from them. All the worst people you went to school with are also online now, possibly trying to get you to buy something from their Multi-Level-Marketing “business”.

I’m not really sure if I have some big overarching point to make here, just trying to identify why “going on the internet” isn’t fun or exciting these days.

I’m an outlier in maintaining this old-school blog. It’s not monetised or sponsored, and I update it when I feel like it. The big monetised blogs of the last decade are already gone, and the money has moved on to Instagram and Tik Tok. It’s quite nice however to have an archive of old stuff that I’m in 100% control of.