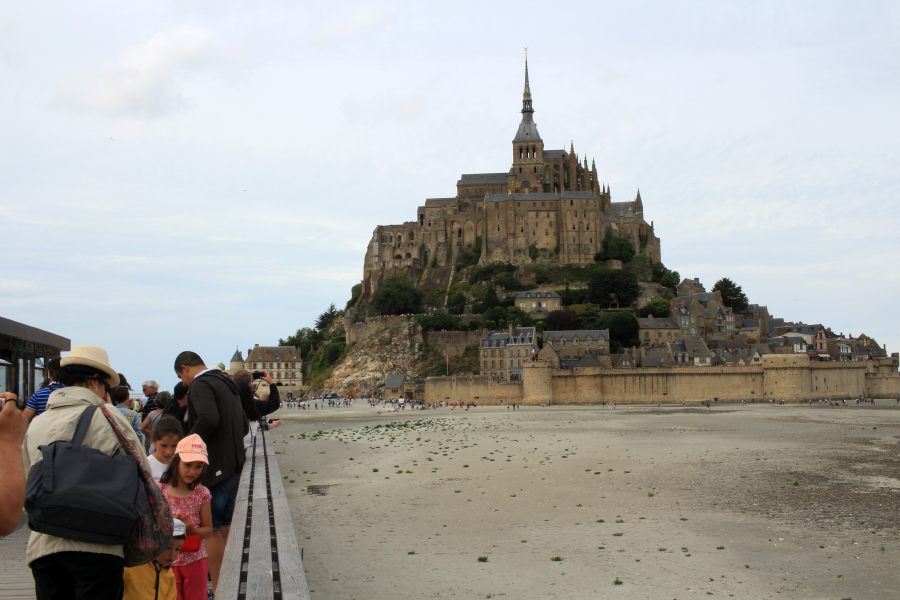 I went to Mont St Michel last week for the first time in years. It’s a medieval abbey on an island on the border between Normandy and Brittany, about an hour’s drive from my mum’s house in France. We went there a few times when I was a kid, and the last time I was there was in the late 90s on a school trip. It has dramatically changed since then.

There was something a bit seedy and cynical about the place in the 90s despite the spectacular town itself. Buses and cars drove over the causeway to the island, and parked in a decrepit carpark on the shore, which had a tendency to flood. As you made your way up through the snaking medieval street to the abbey at the top of the peak, there were endless shops selling cheap replica hunting knives, saucy postcards and boxes of firecrackers. It must have been a nightmare for teachers supervising school groups.

(The causeway approaching the island, after the bus dropped us off)

All that is gone now, and the place is so cleaned up it’s almost like Norman Disneyland. The bay was in danger of silting up, so a hydraulic dam has been built to keep the water flowing, and the carpark and visitor centre moved to dry land, with a shuttle bus to take visitors to the island. Everything was clean, fresh and recently scrubbed up, which felt a little odd, even though it was still enjoyable to visit. The shops mostly sold tasteful souvenirs, and the restaurants were also well scrubbed up, with high prices. We went on a Monday in August, and it was pretty busy, but not unbearably so. I hate to think what’s it’s like on a weekend in the Summer or a public holiday.

We found a reasonably priced place to eat- Le Chapeau Rouge, and had the Norman/Breton dream- the €13 double pancake meal. A savoury buckwheat galette with cheese and choice of toppings for the main, followed by a sweet crêpe, and a earthenware cup of cider. Sadly I had to have Orangina rather than cidre, as I’m badly allergic to sulphites. (You can also read about bad pancake times elsewhere in Normandy here).

Before we actually reached the abbey, we stopped off along the coastal road, where there was a parking area, and a viewing point. You were allowed to walk through the farmland as long as you didn’t annoy the animals. It looks like I’ve added the island in here on photoshop, but that’s how it actually looks. I started thinking about how incredible it must have been to medieval visitors, especially since I’d recently re-read The Name of the Rose. It also made me think of Angela Carter’s The Bloody Chamber, which retells the Bluebeard fairy story in a decadent 1890s France setting reminiscent of Colette’s writing, with the terrifying husband whisking the naïve young bride off to a castle on a similar island.

The sheep that graze on these polders are a delicacy. The grasses and herbs that grow on the saltmarsh give the meat a particular flavour and tenderness. They do the same thing on Romney Marsh on the other side of the channel, which also has a similar historical island town in the marsh- Rye. Not that I’ll be eating any of the lamb though, as a long-term vegetarian. (Later that evening, I remembered Enid Blyton had done a Famous Five book, Five Go to Smuggler’s Top with a Mont St Michel/Rye hybrid setting. I dug it out online and had a look- it pleasantly terrified me as a kid, but now struck me as a weird Enid-Blyton-does-Daphne-du-Maurier type of thing)

The car park used to be on this beach. I’m glad they got rid of it. Now when the tide comes in, it goes right to the base of the island.

The abbey at the top of the rocks. As well as a church and monastery, it was also used as a Bastille-style prison in the past. We didn’t go in this time, we’ve visited before, and there were some big tour groups at the same time as us.

Instead we climbed up to the battlements. Mont St Michel is basically Narnia. It also reminded me that I had actually read most of the Narnia books in Normandy as a kid, and spurred me to start work that evening on a C.S. Lewis zine I’d put on the backburner, as part of the Being Editors series of children’s literature zines. (The first issue is about Diana Wynne Jones, and will be re-issued soon, there is also an E.Nesbit issue in the works)

You can see how busy it was.

Looking down at the people on the beach from the turrets made me feel like I was watching some kind of wildlife documentary.

Here you can see the long migration to the watering-hole. Hope there’s no lions around.

I don’t fancy these people’s chances. Seeing people so far out gave me a bit of anxiety. People who aren’t used to the sea, or are used to mildly-behaved waters like the Mediterranean or Black Sea underestimate the speed and suddenness of the tide in the open sea, which leads to disasters like at Morecombe Bay. I wonder how often the coast guards have to rescue people here.

View of the abbey on the way down.

Although the island is densely built on, there are little pockets of greenery.

Including this little garden.