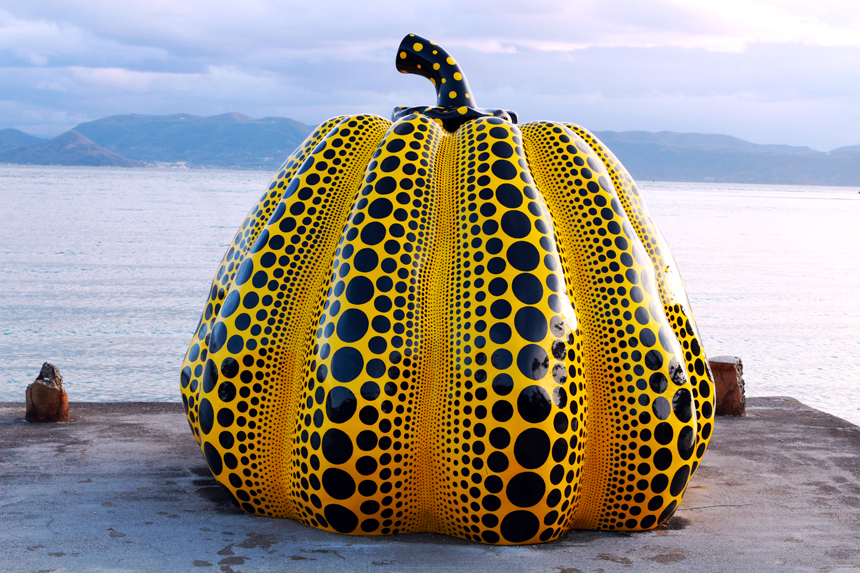 I won a competition last year for free plane tickets to Japan, and went with my friend Vicky for just under three weeks in March, using a rail pass to explore the main island of Honshu and staying in hostels (and a spell in a hotel in Kyoto that came with the flights). Apart from the free flights we were totally broke, so a lot of the focus of the trip was on free or low cost attractions like scenery and museums and making maximum use of the rail pass rather than restaurants, bars or shopping. You can see more photos from other places in the Japan category of this blog, and also read about the trip in the zine I wrote.

Naoshima is tiny idyllic island in the Seto Inland sea devoted to modern art. The opening of the Benesse modern art museum (owned by the same organisation as Berlitz language schools) revived the island’s fortunes, although it’s still a small and quiet place with only a few villages and a lot of old people.

We visited the museum, but no pictures were allowed inside, so these are all of the rest of the island. I’ve made a post of some of the artists in the collection here.

Arriving on the island took a while. We had to get a train from Kyoto to Okayama, then an slightly creaky local train to Uno port, then a boat from Uno to Miyanoura on the island, then a tiny minibus decorated with Kusama pumpkins and with five seats inside to Honmura, the village where we were staying.

The view back to the mainland

Honmura is a pretty little fishing village with a small harbour and narrow lanes of old wooden houses, with the Benesse House museum an easy walk of a couple of miles along the coastline.

A courtyard garden between the wooden houses.

There are lots of plants outside people’s houses and in the street in Honmura.

Cafe on the harbour

Moored in order of colour

The Ando Museum in honour of Tadao Ando, the architect who designed the various arts venues on the island (and a lot of other famous museums)

Sadly it was closed, but the building itself is great.

Walking along the coast towards Benesse House

This torii on the beach was covered in stones for good luck.

And the odd pine cone

The beach besides the museum

Climbing up the slope towards Benesse House

A sculpture at the top of the hill