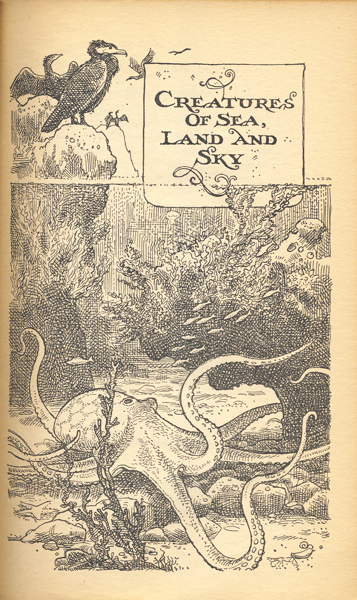 Here’s some Puffin books I scanned so I could stick the pictures in my art college diary.

Puffin annual from the 1960s. I mainly bought it for the cover, but it’s actually full of interesting articles.

Such as the making of Captain Pugwash. I never realised it wasn’t made by stop motion, but by three people wiggling the bits of cardboard in real-time along with the soundtrack via tabs on the back of the artwork.

Puffin by Design book I got for my birthday. The late 50s-early 70s designs in the book are amazing, but they get really tacky in the 80s, and even the recent stuff is things like “Magic Kitten Seaside Mystery” with crappy computer drawn glow on everything (glow shading is one of my pet design hates). The author makes rude comments about the 80s and 90s covers, but restrains from commenting about the current ones.

You can do a lot with flat planes of colour. Sometimes advances in printing work against quality of design.

This book’s great. It’s organised into “The Sea Itself”, “Creatures of Sea, Land and Sky”, “On the Beach”, “Findings and Keepings”, “I Do Like to be beside the Seaside”, “Harbour and Island, Cape and Cliff”, “Fishing and Fisherfolk”, “A Life on the Ocean Wave”, “Vessels”, “Seamen All”, “In Deep”, “Sea-Changes”, “Lovers False and Lovers True”, “Dreamers, Solitaries and Survivors”, “Shipwreck, Storm and Disaster”, “Wreckers, Invaders, Pirates and Prisoners”, “Battles and Engagements” and “Voyagings, Departures and Homecomings”; which is almost as good as a poem itself. It’s got everything from Homer to Philip Larkin and has really nice illustrations at the start of each category.