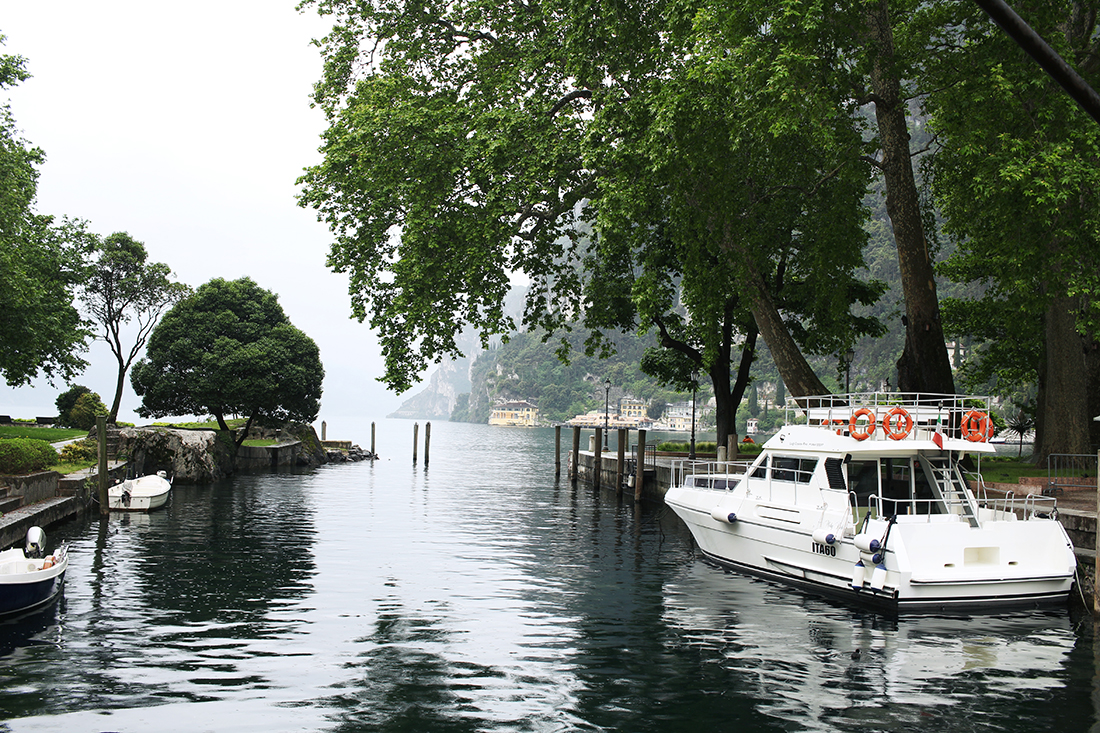 So far I’ve shown you Malcesine and Limone sul Garda. I also took the boat to Riva del Garda at the northern end of the lake (which is also in a different province- Trentino). It was raining all day, so I figured I might as well go to the colder, rainy end of the lake and visit the museum, and save the outdoorsy stuff on the southern end like archaeological sites for a sunny day.

From 1815-1918 Riva was actually in Austria, and although it’s typically Italian in many ways, there’s a definite alpine influence there (and a lot of German and Austrian tourists). I had been there once before, in about 2000. A little while ago I dug up some photos I’d taken on a disposable camera then, and posted them here.

Riva del Garda didn’t look much different 16 years later, even a lot of the shops were the same (including the very weird little department store) although the café on the harbour that I’d remembered as being a bit expensive and having an elegant art nouveau style sun balcony, and where I’d planned to sit and do some drawings of the lake, now had a tatty plastic frontage and was half-closed.

I don’t know whether I remembered it wrong or was much more easily impressed in those days or the café has hit hard times or a combination of all of those account for it, but I didn’t end up going there, and instead had a pizza.

Again I travelled there by boat. Sitting in the open seats at the prow was not so much fun when it started raining heavily, and I had to retreat to the cabin in the end.

The northern end of the lake is the most mountainous, with the coolest and wettest weather. In August when the rest of Italy is almost unbearable, it’s utterly packed with tourists enjoying the relief of the mountain chill, but in May they were thin on the ground.

Until Mussolini built this road around the lake, a lot of towns were only accessible via boat. Riva had a train station with a line that didn’t really go anywhere much at one time, but it’s been closed since the 1930s.

Apart from a few small towns, there’s not a lot up this end of the lake, as the mountains are so steep.

It was not a busy day in Riva.

The streets are mostly narrow and cobbled, with restaurants, bars and a few clothes shops.

With mountains looming up at the end of every street.

While I was there, I visited the local museum, where they had an exhibition of photos of Riva del Garda in the 1920s. Aside from the clothes and number of street urchins (rare on the ground in modern Italy), Riva looked pretty much the same as it does now. Even most of the hotels had the same names. There was also an exhibition about the Italian Resistance in WWII in the area- large numbers of resistance fighters hid in the mountains nearby. Mussolini holed himself up in Salò after 1943, a bit further down the lake near the grand villa of Gabriele D’Annunzio (often described as the father of Italian Fascism), where he ran what was left of his territory from the small town until his assassination in 1945.