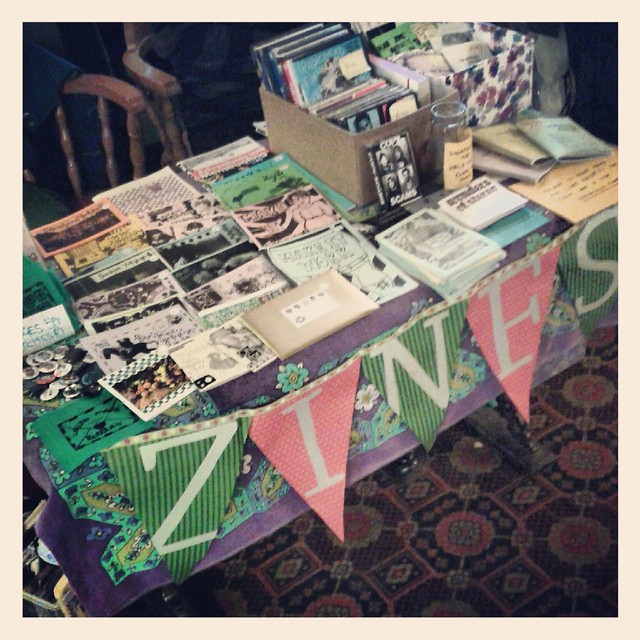 On Saturday I did zine stalls at Brixton Record Fair and Bloody Icecream. I brought a film camera with me, and the film is at the lab still, but I took some (not fantastic) phone pics too.

Like I said earlier, I am currently in Kent looking after my mum’s cats while she tos and fros seeing to my grandad and his affairs (my nan died at Christmas, and my grandad is a frail old man of 88 who can’t really look after himself any more. He finally decided to move to a home a few days ago after ending up in hospital three times in one week). I’m still job-hunting and going to fruitless interviews. Tukru came round on Friday night, with the idea we would eat pizza and have some drinks and make things. She had some zine to work on, but it didn’t really happen. We drank too much cheap fake malibu. That drink makes me think of being 15.

I did however manage to make this for the next day:

The Ercol coffee table cost £2 from the Autistic Shop in Reading, still possibly the best charity shop I’ve ever encountered. I got a made in East Germany amp there for £2 that I’m surprised never exploded, and an impressive-looking reel-to-reel tape machine that did go pop. They had an old man who volunteered there who would check electrical things over, but I don’t think he did a very careful job.I’m kind of glad that the coffee table has dodgy varnish and coffee marks that came on it, because I looked it up on ebay once, and the price of ones in good condition would make me scared to use it if it were still like new. My dad has the dining table and sideboard that he bought in the 60s, and they are still looking good, probably because they weren’t out on the pavement by a charity shop for a week. It’s the only bit of my furniture currently in use, all my stuff is still in boxes, waiting for me to find a place to live.

Tukru didn’t get much zine done. Apparently I’m a “bad influence”. I titled this one on Instagram, “Tukru is an unproductive member of society”.

Next day I went to Brixton to do the stall with Fliss. It was a pleasantly smooth journey. I arrived in plenty of time, had no trouble finding the venue, and the table was all ready for us.

You can see my zines, the ones from Tukru’s distro, Fliss’s zines, and some unwanted cds and music dvds of hers. A lot of the cds were duplicates, and there was a Banarama one that her boyfriend had bought looking for a song he loved when he was a kid, but it turned out not to be by Bananarama. The tablecloth is mine. I once shared a house with some very boring people, who banned me from using the table cloth downstairs on the grounds it was “hideous”. Pah.The jar was to collect money for Luke Haines‘ ill cat.

We met some really nice people, and F’s friends Yoko and Ellen came too. A man picked up a Stockhausen CD from the box and looked undecided about it and asked us to describe the music. He seemed to like our spur of the moment descriptions so much that he immediately bought it. He seemed oddly suggestible, and I think it was a pity that we didn’t think of persuading him to buy the Bananrama cd too.

I went with Felicity and Yoko to get some food and have a few drinks around Brixton before going to Bloody Ice Cream. We found a cheap Thai place on Coldharbour Lane and saw this on the menu:

I’ll write about Bloody Ice Cream and the bands when I get the film back tomorrow.

I had a really good time, but my journey home spoilt it. I left the gig early because I hate getting the last train back to Chatham, it’s always full of lowlifes. There’s no trains to Kent between 12.30 and 6am. The train was full of loud drunk small-minded idiots. I had my ipod, but the batteries ran out so I had to hear them and avoid making eye contact at all times. There was a really nasty group of young men sitting by the only toilet on the train. Every time a woman went into the toilet they started yelling disgusting things at her. I really didn’t want to use it, but the train was delayed, and after an hour I really needed to go, so I decided to brave it rather than have to walk from the station bursting for the loo.

As I walked past them, staring ahead in the haughtiest way I could, the train went over a bump, and I tripped, and a tissue fell out of my pocket. The nearest man immediately started screaming at me to pick the tissue up and that I was disgusting and would give him diseases. I didn’t say a word (didn’t pick it up either) and went into the toilet. The men started hammering on the door and screaming that I was “fucking dirty bitch”. When I came out I had to walk the gauntlet of drunk stupid men screaming names at me. I just put on my best “I hope you die of something slow and excruciatingly painful” face on, and walked steadily through them, and went and stood with the train guard. When I saw that the men looked like they were getting off at my station, and were slow and drunk and I was at the nearest end of the platform, I leapt off the train and legged it up the stairs with my heavy bag and got as far away from the station as possible to avoid running into them. I fear for any girlfriend of those men.

The sad thing is that the whole episode didn’t leave me shaking with rage or adrenalin, or crying or anything. I just felt mildly pissed off, like I’d trod in some gum or something, because this type of shit happens far, far too regularly, and you can get acclimatised to anything.

The people of my hometown have a bad reputation, and often they live up to it. (Obviously there are a lot of nice people from Medway too). The attitudes to women in this town are fucking prehistoric. No-where else have I regularly encountered the attitude that if I have the gall to exist after sunset as a woman, then I must be a prostitute. I once literally had a man come up to my face in the street and ask me “how much do you cost” when I was walking briskly along to a pub, wrapped up in a scarf. There’s a reason I left when I was 18, and have tried to spend as little time in the place as possible.