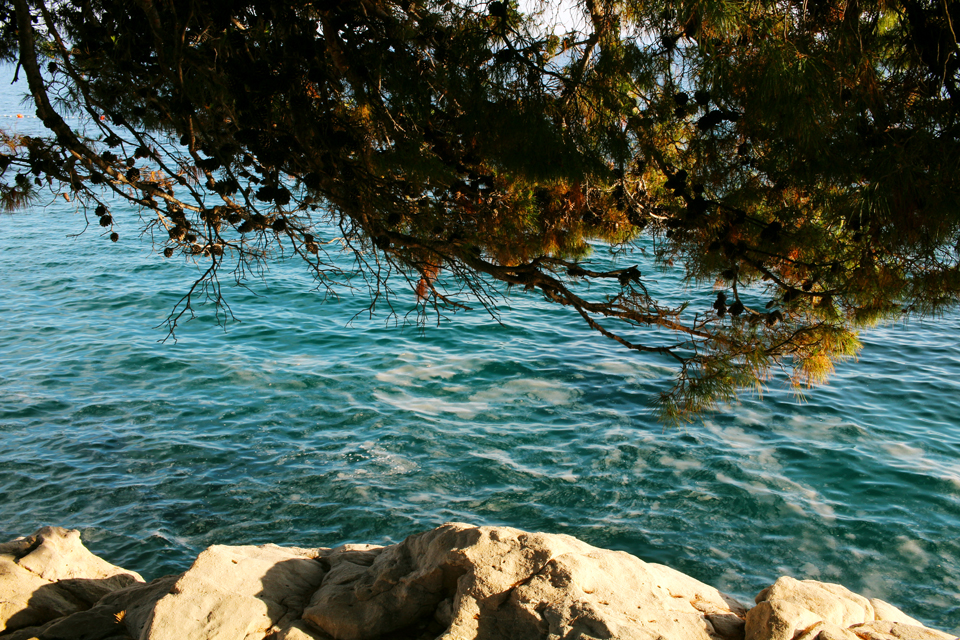 Here’s some photos from my trip to Croatia this summer. It was a real last minute thing, I suddenly had a week free in a packed summer of teaching engagements and still didn’t actually live anywhere yet, so I bought a cheap flight to Croatia and did some sightseeing (before returning to Slovenia ten days later for work). Here’s some pictures of Split. I wrote more about the trip in a zine- available here, so I’ll leave the longer writing in there and just show the photos.

The centre of Split is made up of the remains of Roman Emperor Diocletian’s palace. It’s a filming location for Game of Thrones, so there are some wonderfully tacky GOT souvenir shops around. There’s also a strange little craft market in the dungeon.

This is the seafront. I was sitting here one weekday afternoon enjoying a burek (life tip- eat as many delicious cheese bureks as you can), and reading my book, and a Korean woman was doing the same on the neighbouring bench. A drunk old Croatian sailor who stank of mouldy cigarette smoke sat next to her and started talking to her. I had been planning to get up, but didn’t want to leave now a sleazy guy was there, in case she wanted some backup.

Initially he made some small talk in English about asking where she was from, did she like Croatia etc and she answered to be polite. He then started saying “oh a beautiful girl like you shouldn’t be staying in a cheap hotel, come with me and I’ll take you to my friend’s five star hotel” so she immediately started praising her own hotel (but carefully not naming it) and saying how happy she was there.

She then shifted away from him and pointedly read her book in the hopes he would get the hint and go away. Instead he started telling her he used to be in the Yugoslavian Navy and went on a ship to Vietnam, and oh those Vietnamese ladies were saucy and keen to earn money, and was getting creepier and creepier.

In her new position we were facing each other, and the creepy old guy had his back to us so we mimed at each other let’s leave together, and managed to get away from him. It’s sad how good you get at minimalist miming to signal getting away from creeps. While writing this, I was thinking “oh I should cut this, I shouldn’t be negative when sharing photos, everyone will think I just complain about everything”, but that’s the reality of the world if you’re female or from a marginalised or discriminated against group. You’re minding your own business enjoying a beautiful view, and someone deliberately spoils it because they can’t let you go unharassed. And then you guilt yourself that you’re being “negative” or “dramatic” by talking about it. It’s high time all the shame shifted onto the perpetrators.

There’s loads of boats in the harbour offering trips to various islands and Dubrovnik.

A bit further along there is a fancy cafe. I was enjoying a drink there one afternoon, and the café sound system was playing the radio over the outside speakers- Justin Bieber was playing at that moment. A boat drew up and started absolutely powering out Fear of the Dark by Iron Maiden on a loop. I was stuck with Maiden in one ear, and Bieber in the other. The waiter frantically hunted for the controls for the café music and realised he couldn’t actually find it and the music was stuck on. We just hoped the boat would go away. But it didn’t. It just kept playing the same song again and again. So all the customers (including me) hurriedly paid up and left. It was simultaneously painful and hilarious.

Further along the coast there’s a roped-off swimming area in the sea. Unfortunately something was spawning in the water. Leading to the lido pool on land being absolutely rammed, meaning I never did get a swim. Later I asked the hostel receptionist (the same woman who told me I had “the voice of a psychiatrist”), and she was like “oh yeah I never go swimming around here, there’s always something up with the water, I drive further along”.

Never did get my chance.

At least the coast path is beautiful.