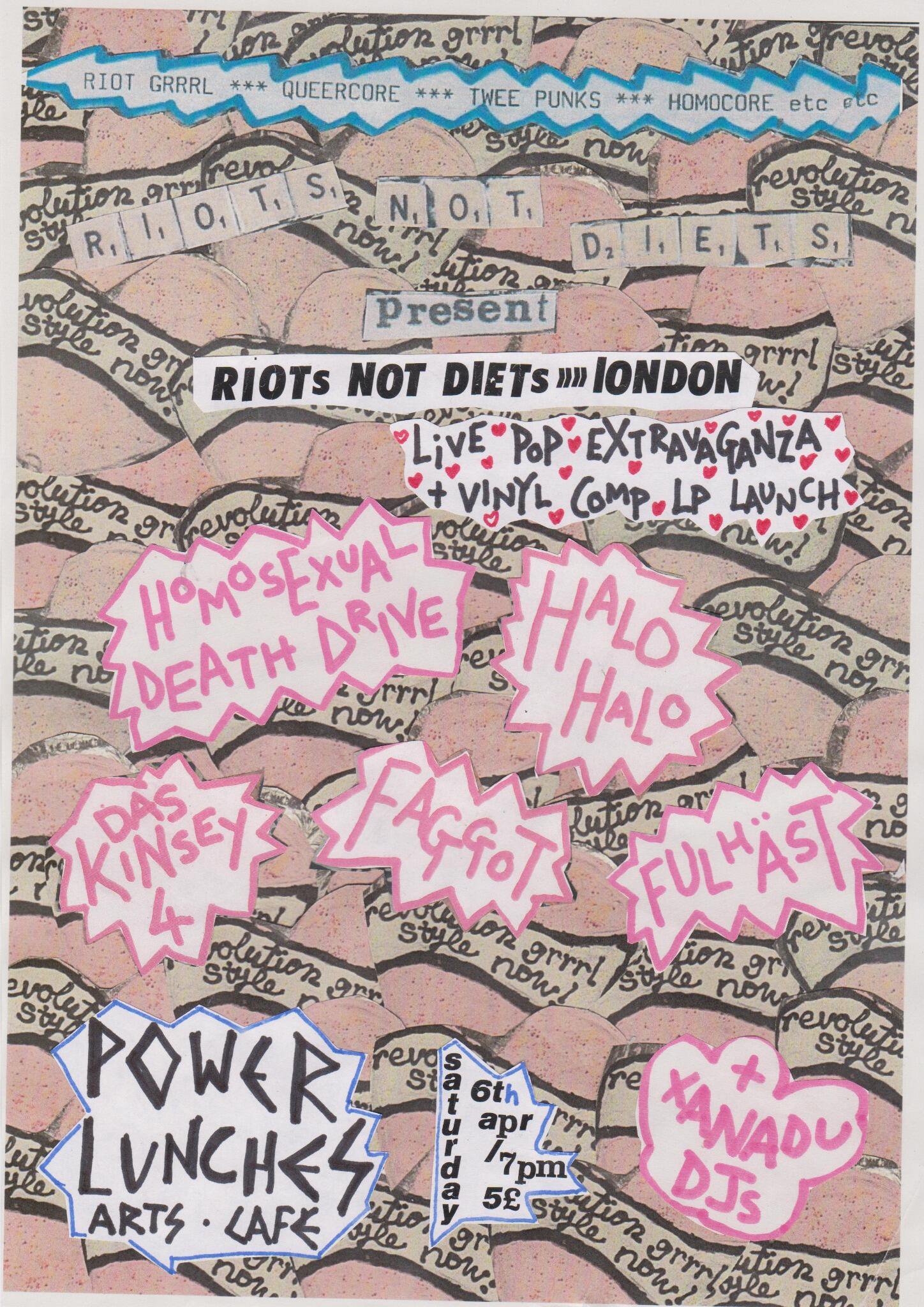 I went to a fair few small gigs recently. I’ve been moving house, but trying not to be a hermit who spends all their time making bookshelves. 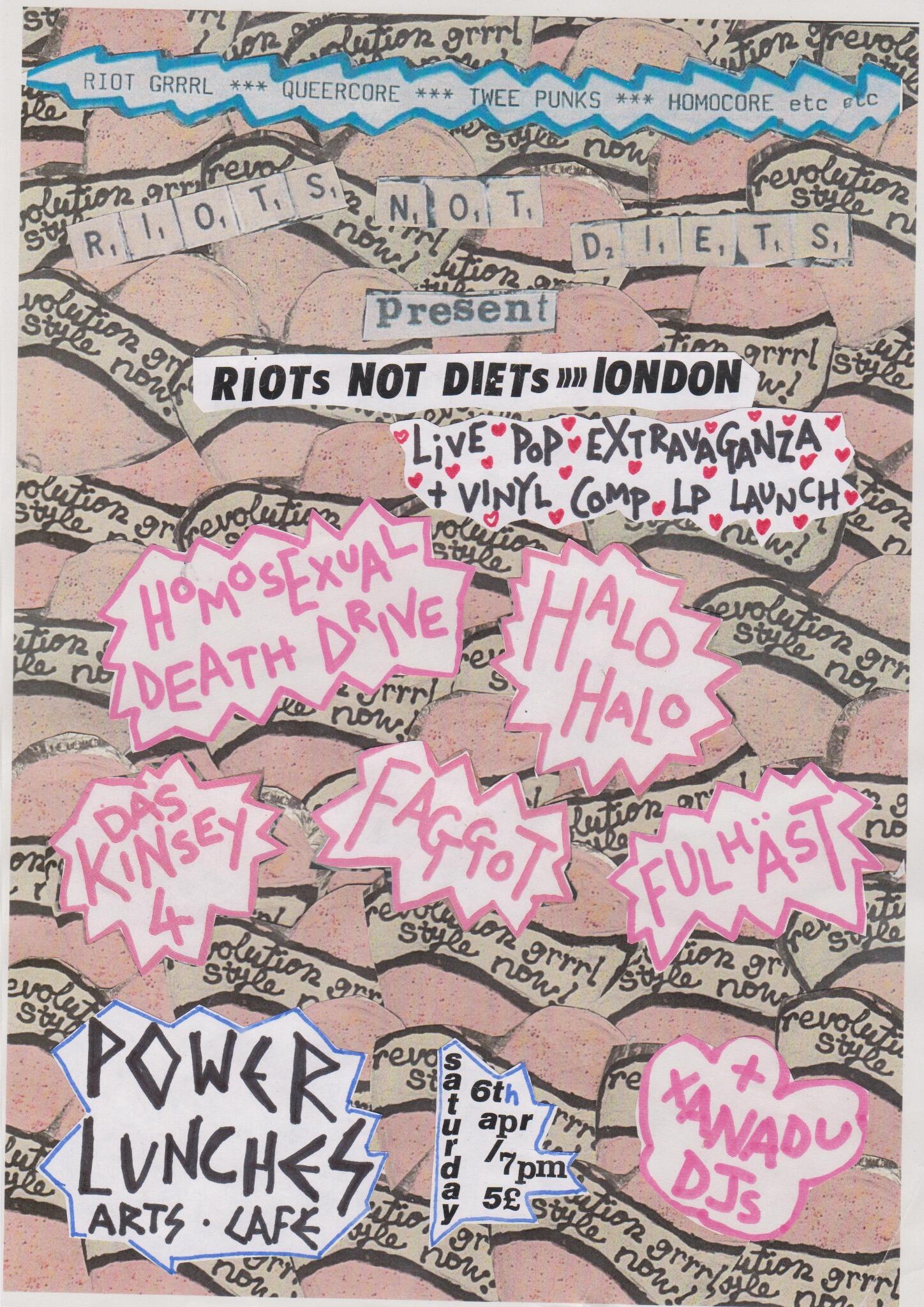 First up was Riots Not Diets at Power Lunches, the first London outing of one of my favourite Brighton nights. I first met Tobi when we were both copying zines at the print centre, and he was also copying the flyers for the first Riots Not Diets. That’s a good way to meet people. The Brighton edition includes a film screening, because T is a film projectionist by profession. He couldn’t be bothered to bring the equipment for that to London, but there was still the same lineup of queer and female fronted bands.

Power Lunches is a tiny café on Kingsland Road. Upstairs they have a bar and small art exhibition, downstairs is a a basement with a rickety plywood stage for music. The basement is dingy, the toilets are a bit grim, there are hardly any seats, and the opening times are a little mysterious, but I love the place. The atmosphere is great, the staff are nice, and the drinks are cheap, and I’ve never failed to have a really nice time there.

Riots Not Diets was the launch night for their compilation, which is well worth getting (and also features my friend Ellie who I used to run the Brighton Zine Fest with). The two stand out acts for me were Homosexual Death Drive, with their close harmony singing and luchador masks and handing out of streamers, and Halo Halo, the headliners who were incredibly tight. 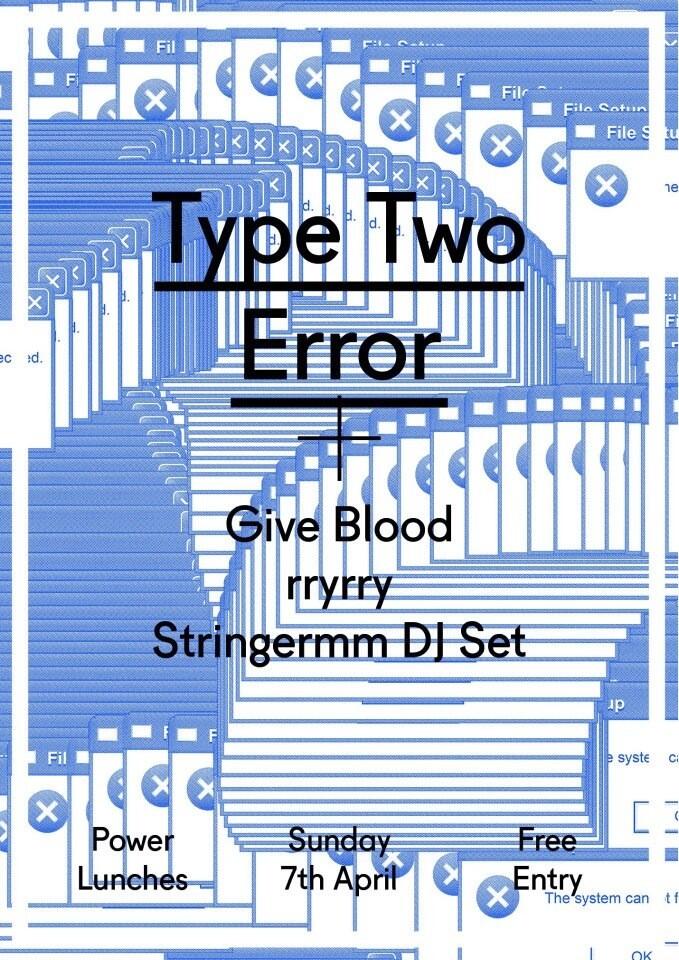 The next night I was also at Power Lunches, this time to see Type Two Error, one of whose members I knew from Reading (and hadn’t seen in a long, long time). They don’t seem to have any music online that you can listen to, but I suppose you could look at their tumblr of reblogged photos of things they like/instagram photos and imagine some music, probably entirely wrongly.

Also, I feel I should mention this place in Estonia right now. It’s a bar in Tallinn that only plays Depeche Mode, and is decorated with pictures of Basildon. I’ve been there twice. Once on my birthday. I didn’t plan to spend my birthday in the Depeche Mode bar, it’s just if you’re in Tallinn on your birthday, and see a place like that, I think it’s required you go there.

I went to this gig with Melanie, who is generally game to go to things if they’re free, and who didn’t mind that I wanted to go to a gig where I had no idea what the music sounded like. Luckily it turned out to be exactly her type of thing.

I was supposed to go and see UpCDownC, but I was tired from work and moving, and I fell asleep fully clothed at 8pm. (And woke up very confused at 3am). Instead I went to see Chris and JimE from UpCDownC’s new project, the Parade, later in the week at the Strongroom. I’ve seen UpCDownC a million times, but this was only the Parade’s third gig. They had teamed up with Mosh and Sam from Lupen Crook and the Murderbirds and Jemimah Dean to form some sort of Medway supergroup. I’ve known these people a very long time.

When they were teenagers in the 90s, Chris Garth and Mosh had a grunge band together. When that came to an end around 2000 or so, they did their own projects and the odd collaboration, but I think this is the first time they’ve had a band together since. JimE and Mosh also used to be in a band called Bonzai Resevoir with a guy called Magic Lee who has a waist-length beard and plays the saxophone. I think everyone needs to see more of Magic Lee.

They combined the dark folk aspects of Mosh’s solo stuff, with male/female vocal harmonies and JimE’s electronics (and refusal to wear shoes on stage). Also another band very worth seeing. My friends John and Morgan also came along.

Before the band there was a showing of animations and sounds by Max Hattler. Afterwards me & John realised that we have ruined things like that for ourselves. I found myself spending the whole time thinking things like “is that done on AfterEffects or Flash? Ah, so that layer must be set up like that”, and he was thinking similar things about the sound programming. Learning how things are done ruins your life I guess.