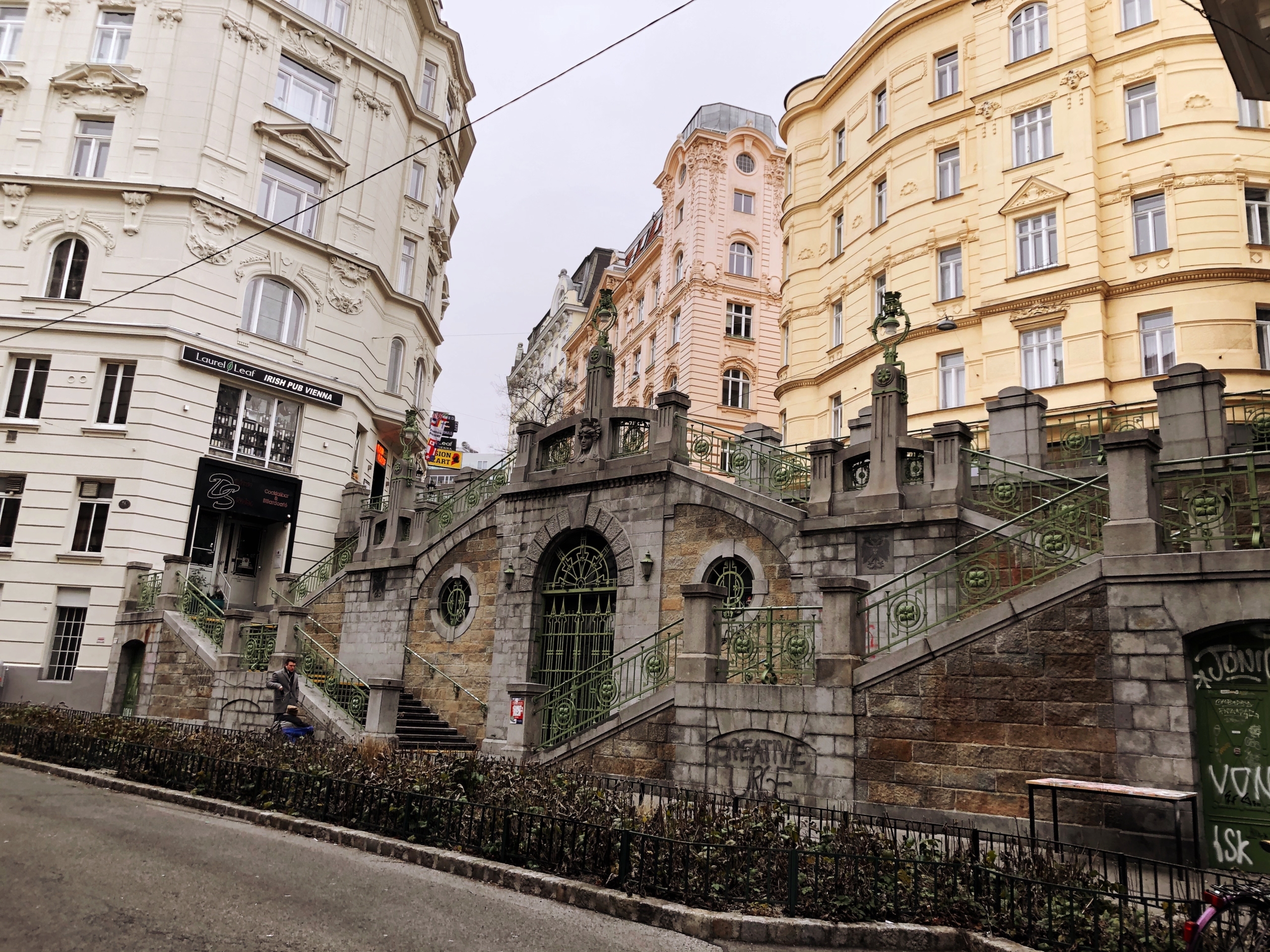 This Means Nothing To Me?

(Fillgraderstiege steps near my hotel)

I’ve been back in Vienna since Saturday, but I was busy at the annual work conference. Last year was the first in a decade that I didn’t spend any time in Vienna, and that was strange. Vienna is a very big and grand capital city for a small country of six million sparsely spread mountain people, a remnant of the days when it was the capital of the whole Austro-Hungarian empire, covering Austria, Hungary, Czech Republic, Slovakia, Slovenia, Croatia and parts of Romania and Poland.

I’m teaching a group of ten year olds in a school in the 18th District on the outskirts of Vienna this week. The hotel work provides is in the centre of the city, in Mariahilf, the 6th District, which is incredibly useful. My neighbourhood looks like this. Vienna doesn’t get much snow in the Winter. There are also not any mountains. A lot of people’s mental images of the city mix it up with Salzburg or Innsbruck. The Danube isn’t a grand centrepiece like in Budapest either, it mostly runs in a series of canals in the east of the city.

I don’t even pretend to understand how the room numbers work in this hotel- they’re not even separate wings or anything- the numbers are all jumbled up along each floor.

Müller is a chemist’s chain found in Germany and Austria. Their branding is very Biba meets Willy Wonka. As well as shampoo and toilet bleach and the like, they also have these aisles full of boxes of chocolates and cheap wine in most branches. Treat yourself while buying the verucca cream.

Vienna is further east than Prague and a good chunk of Poland, and about level with Gdansk. It has a lot in common with its twin Budapest, and a certain Eastern European flavour (and a dialect of German heavily influenced by Czech that sounds quite Slavic to many people). There are a lot of very grand imperial buildings in the centre, and glossy new glass ones, but the city still has a kind of good-natured seedy shabbiness in lots of ways. In the Cold War days it was the last major Western city before the Iron Curtain, and it was absolutely full of spies and intrigue.

When I first started coming here for work, what is now the Central Station was two small terminus buildings. After the grand original station was damaged in the war, they built two small ones- one heading south over the Alps, and another heading east, with strict passport controls. The nearest U-bahn station was also a fair walk across the square. Trains heading west went from Westbahnhof or Meidling Station further out. The pre-war international trainlines were still there, you just couldn’t actually travel all the way along them. Can’t let people sit on a non-stop train from East to West. What if they don’t get off?

Obviously now the borders are open thanks to the fall of the Berlin Wall and then the EU and Schengen Agreement, and they’ve restored all the trains criss-crossing Central Europe. They knocked down the old stations and built a new one with lots of platforms, shops and cafes. It’s very convenient and pretty bland and glossy looking, so I didn’t bother to take any photos. Instead here’s a picture from Wikipedia of the old station. The main 1950s terrazzo concourse was pretty cool (like a larger version of the still existing 1950s station in Innsbruck), and you can definitely imagine spies lurking around the newspaper kiosks, but the lower floors and toilets were grim. In a Christiane F way. You can see more photos of what it used to look like here.

Austrian German can be very different from German German (although not as different as Swiss German), and there are also pronounced regional accents. At this point I would say Austrian German feels more like “home” to me than the German variant. People from Northern Germany sound posh and rigid to my ears, and actually saying “guten Tag” as a greeting feels as unnatural as saying “good day” would in English. Of course this means it’s hilarious for people from Northern Germany that I sound so Austrian (and Viennese in particular). I also find specifically Austrian phrases like “das geht sich nicht aus” (ah, it’s not working out, said in a tone of resignation when things don’t go your way) or “passt scho” (don’t worry about it, it’ll be fine) annoy them a lot- this is not the German philosophy of life.

This 80s guy from a longer documentary film has a really strong Vienna accent. He’s complaining about the cost of living, how much he hates that far right arsehole Jorg Haider. I thankfully don’t sound like him.

When I finished my MA, I did some temping work at a subtitling place in London. They had a whole batch of Austrian shows that needed the German subtitles reviewed for quality control. A native speaker (but not from Austria) had typed them up, and I had to watch ten minute clips of the shows and grade the subtitles for accuracy and how well they were synced up to the audio. They needed someone familiar with Austrian German, as many of the shows such as this one have strong regional accents.

This is a comedy drama about a cleaner and security guard couple in a council building in Vienna who win the lottery, but can’t tell anyone. The dad in particular has a very strong Vienna accent (as do a lot of the customers in the hairdressing salon scenes). I got pretty in to it, but I never got to see a whole episode the whole way through. Now it’s on Youtube, perhaps I should fix that.

The Viennese are known for their Schmäh- a sarcastic smart-arse attitude. Someone who’s a wind-up merchant is a Schmähtandler in Vienna- literally a sarcasm dealer. This alternately results in rude waiters and shop assistants who can’t resist telling you dad jokes (success varies on your level of German). There is a very old man who works (or did until the last time I was here) in the newsagents near the hotel. He responds to queries like “I’m afraid I’ve only got a €50 note” with replies like “I wish I had problems like that”. He is a snotty treasure and I hope he’s still there.

Austria is a little lacking in modern music, but Falco was probably the most Viennese man alive. Look at that smug smartarse face, but not taking himself entirely seriously.

Viennese coffee shops are an institution. You expect brown wooden panelling, surly sarcastic waiters, as much time at the table as you like, and a supply of indulgent cakes. Cafe Sperl is one of the most famous, and also right near the hotel. It also happens to be next door to the Art School, who were holding an Open House over the weekend, so I went in for lunch before seeing the exhibition. Unlike a lot of tourist institutions, the food is both tasty and reasonably priced, probably because locals and art students also go there.

I ordered traditional Austrian pumpkin soup. The brown on top is Styrian pumpkin seed oil made into a balsamic salad dressing or to drizzle on top of food. (I also had a cake and coffee).

There used to be an extremely old man who worked there, who would say extremely old-timey things like “would the gracious lady care to sit down?” who seemed to have been there since Austro-Hungarian times. He wasn’t there this time, perhaps he finally retired. He had a stylish way with a teatowel, obviously honed through years of experience.

Austrian society has very different flaws to the UK (mainly far too high a tolerance of outspoken racists, and a worrying tendency for the far-right party FPÖ to actually win power). There are many things they do right however. 30-40% of all the housing in Vienna is owned by the city and rented as social housing. Many of the buildings have a proud inscription on. Rents are much fairer than London, and people have security of tenancy in both public and private rentals. Public transport is subsidised, and efficient and affordable. A week’s ticket for all modes of transport within Vienna zones cost me €17.

The level of poverty and inequality that the Conservative government has allowed to happen in the UK over the last decade just doesn’t exist in Austria. It often comes out top or near the top in international surveys of wellbeing. Landlords can’t charge fortunes for substandard homes. There are some homeless people in Vienna, but not in any way as many as in London or Manchester, and you don’t see them outside of the couple of major cities. There is also more stability in a lot of things- if you find a cafe or restaurant or shop you like when visiting, the odds that it will still be there when you return a year or two later are very high. Vienna is definitely not a place at the cutting edge of anything, but they like to do things with a bit of style and comfort, and make the comfortable life accessible to the common person.

I visit schools all over the country- they’re public, state-owned. They are all much the same quality. Decent, consistent funding, but nothing lavish, rather than the cycle of neglect under the Tories and then massive upgrades under Labour we get in the UK. Teachers stay, rather than getting burnt out in a few years. Sometimes the local council pay the fees for the workshops I run, and sometimes the parents pay (especially in the holidays- the price is very modest for childcare for younger children). You don’t see children who don’t have lunch or decent shoes or pencils. School finishes at 1pm, and the local councils run various free or subsidised activities. There’s just a lot more sense applied to meeting people’s needs, and less greed.