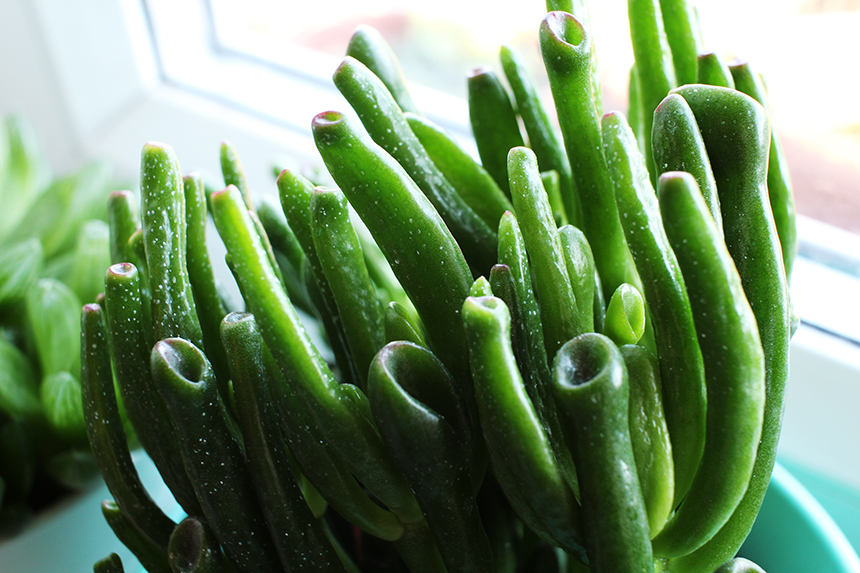 I’ve built up a collection of cacti and other succulents over the last year or so. They’re desert plants from the Americas and southern Africa which store water in their bodies, so they don’t need a lot of looking after, and they have a huge range of dramatic shapes, which explains why they’re such popular house plants. They’re also cheap to buy- mine all came from the supermarket, Wilco or IKEA and cost £2-4 each- and can live a long time if kept in the right conditions. (Opuntia cacti also produce delicious prickly pears and nopales pads for cooking). My current room has a large windowsill which gets some fierce sunshine around lunchtime, and is next to a radiator which dries up the air throughout the winter, which is the ideal conditions for growing them. I used to be into growing orchids and indoor herbs as well, but they just don’t thrive in the conditions here.

(The window sticker is from the Margate Shell Grotto, somewhere I really recommend visiting)

Looking after succulents is pretty straightforward. Often when you buy them, they don’t come with a card with the species name, but it’s easy enough to find them in a book or website because the shapes are so distinctive. Almost all of them like sun or moderate shade, and minimal water anyway. At certain times of the year they like to be watered frequently and have some plant food, but it’s better to underwater them than overwater them, as the leaves can start rotting if the conditions are too damp. Most of the year I water them sparingly once a week at the base with a watering can, and in the months advised by my succulent-keeping book, I spritz the soil daily with water with a little plant food in. They like the soil to be well drained and the roots to not be soggy (they can rot like the leaves), so mine are still in the plastic plant pot, which is placed inside a galvanised pot or on a saucer, which they seem to like. Sometimes if you’re lucky, they’ll grow a flower. Some of the cacti grow lovely red or purple flowers every couple of years.

My grandad used to grow cacti commercially and competitively. At one point almost every flat surface in his house was covered with them. I don’t think I’ll ever get to that stage, but there is a big cactus still there in a pot in the garden I could take once I’ve moved house and have somewhere to put it (my current accommodation is a little cramped, and doesn’t have a garden and is not the ideal spot for a big cactus with spines).

I like the fact that the transparent ends on this Haworthia cooperi are called “leaf windows”. You can see the water-storing jelly inside. In the wild the plants often grow half buried in sand or pebbles, to prevent them drying out, with the transparent bits poking out to absorb as much sun as possible.

The fluffy cactus is officially called an Old Man Cactus (Cephalocereus senilis). I’d like to get some more of them, but I haven’t seen any in the shops.

A little while ago I got this Haworthia, a Crassula (aka a money tree) and an Aloe for 40p each. They were reduced because they looked really awful. They’d been kept at the dingy back of the store away from daylight, and probably overwatered, and the leaves were rotting. I pulled off some manky leaves and left the plants to dry out in the sun for a week or so, and they’re growing nicely now. You can see here where the outer leaves are broken and stained, but the new leaves growing from the centre are healthy.

At the front you can see the 40p Aloe plant. The Zebra Haworthia in the centre recently grew some flowers. It grew a giant stalk about half a metre long, with lots of buds with tiny little drab white flowers. It wasn’t very impressive to be honest. You can propagate succulents really easily from cuttings anyway. The plant at the back has a brilliant name- it’s called “Crassula gollum“. I’ve had that plant for a few years now. It started out tiny like the other one in the close-up shot in the first photo on this entry, but has just kept growing. I should probably repot it sometime soon.