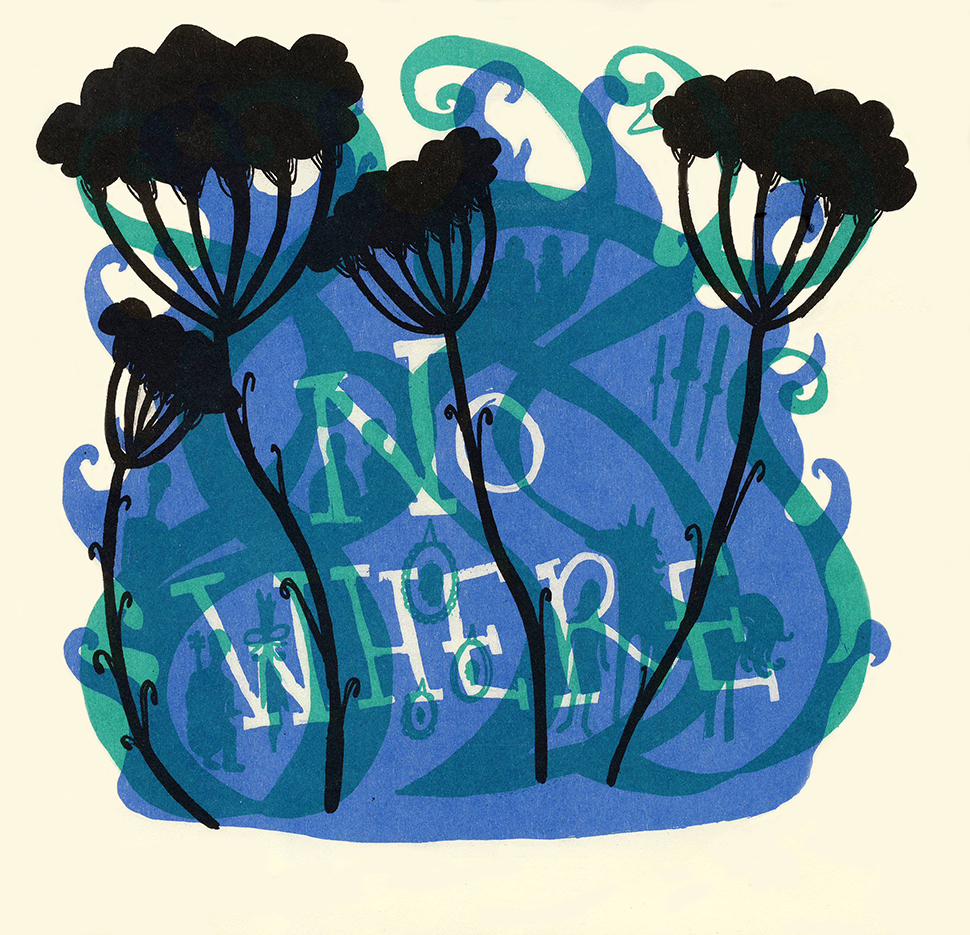 (Fire and Hemlock print available from the shop, along with the zine)

A couple of years ago I interviewed the children’s writer Diana Wynne Jones, my favourite writer growing up. I was compiling a zine of articles about her work. Unfortunately I didn’t finish the zine before she died of cancer, because I’m a terrible procrastinator, and she never got to see it. When I get a chance, I have another entry to add about attending her funeral (edit- you can read it here).

1) You always base one character in each book on a real person to keep the other characters in line, and you’ve said in previous interviews that your mother never seems to get that a lot of the female villains are based on her. Has anyone else ever twigged that a character was based on them, and what was their reaction?

People only very rarely seem to recognise themselves in my books, although a lot of other people recognise them instantly!  The only one who did – and worried about it – was one of my granddaughters, who did see that she might have had something in common with the Izzies in The Merlin Conspiracy.  I hurriedly pointed out to her that I had two sisters and that the Izzies also owed a lot to them.  My husband was always convinced that he was the original of the Ogre in The Ogre Downstairs, even though I assured him he was not.  The Ogre was in fact a composite of How-not-to-do-it as a parent.

2) A lot of people like to play fantasy casting with imaginary film versions of books. With yours, Christopher Eccleston from Dr Who seems a particular favourite for Mordion. Do you have any favourite actors to play a particular character?

I’m afraid I’m very out of touch with actors these days.  One thing I will say, though, and that is if a real life actor were to play Howl in Howl’s Moving Castle, I would not chose someone pretty, like Howl in Miyazaki’s animation: I would choose a Welsh actor with a long, bony face, handsome enough in his way, but not pretty.  I think the fans’ choice for Mordion is a very good one.

3) You’ve said in older interviews that various things you made up for books have come back to hit you like Tom Lynn (like accidentally breaking your neck and not noticing like Christopher Chant). You’ve been pretty prolific with new books in the last few years (Merlin Conspiracy, Conrad’s Fate, Pinhoe Egg, the Game, House of Many Ways), have any things from those come back at you?

No, none of these books have yet come back to hit me.  It makes me quite worried, because the longer it takes, the harder it hits when it does.  I can’t help speculating about what might happen. Would I vanish away into the mythosphere, switch to another world where I was a maidservant, or simply get lost in a house of many ways?  About The Pinhoe Egg I can console myself.  People have showered griffins on me, in pictures, as stuffed toys and as clever puppets.  Just as the book was being published, one of my Japanese translators sent me a marvellous musical box made of a real duck’s egg, which plays ‘Over the Rainbow’ when you twist the top.  The translator meant it to commemorate A Tale of Time City, but it was equally appropriate to The Pinhoe Egg.  While I wait for the other books to hit me, I tell myself that this manifestation from The Pinhoe Egg is relatively benign and I might, with the other books, have a pleasant experience for once (probably in my dreams!). But not, I think, when The Merlin Conspiracy comes true. It means, at the least, a gammy hip.

Actually, it’s no good trying to second guess these things.  This jinx is as cunningly various as my travel jinx, which springs a new surprise any time I go anywhere beyond Bristol.  Last time the building next to the place I was due to talk in burst into flames just as I crossed the city boundary. It was probably also The Sage of Theare coming true out of Mixed Magics.

4) From all accounts, your parents didn’t bother to provide you with many children’s  books. What children’s books do you desperately wish you had been able to read as a child?

Oh, I do wish I had been able to read C.S.Lewis’s Narnia books as a teenager.  They were all getting published from the time I was thirteen.  As it was, I came upon them when my own children were quite young and I read them aloud at bedtime, with a curious double vision: on the one hand as my adult self, and on the other seeing and being very impressed by the reactions of my children.  I learnt a great deal from this, but it was not the same as reading them as a child.

5) In previous interviews you’ve said that you’ve got a whole drawer full of rejected bits from books that never quite went right. Have you ever rescued any of them at a later date, and managed to make a book or short story out of them? If not, do you think you ever will?

I have more than a drawerful of writings that never made it: I have half a cupboardful as well. It is not exactly that I rejected any of them.  Mostly they just stopped being interesting after two pages, or two chapters, or sometimes even halfway through – and if a story doesn’t interest me, there’s no chance it will interest anyone else.  Sometimes, though, events have intervened to stop me writing something.  Quite recently, last year in fact, I turned out my cupboard, which is something I look at much less frequently than the drawer, and I came upon Chapter One of a book that startled me by needing to be continued so much that I had to go on with it with a sprained arm.  I couldn’t think why I hadn’t continued it before.  After thinking it over carefully, I realised that I had been snatched off into hospital (I think with my second broken neck) before I had done more than the first chapter.  Surgery very much stops everything in its tracks /and/ impairs your memory.  So I went on with it and it became my latest book, now with publishers, which is called Enchanted Glass.  I have no idea if it went on the same way as I had planned, but I suspect not.  It just rushed on to the page.

6) What’s the best book you read this year?

The best book I read was sent to me as a printout by a writer called Kage Baker, from America, who wasn’t sure if it was any good or not and wanted me to tell her.  It was called The Hotel Under the Sand and it was excellent.  It was the most unusual book I had read for a long time.  As you can probably tell from the title, it is utterly original, but it is also wonderfully well written and full of amazing ideas.  I wrote back at once to tell her it ought to become a classic, like Alice in Wonderland or The Wizard of Oz.  I think she was surprised.