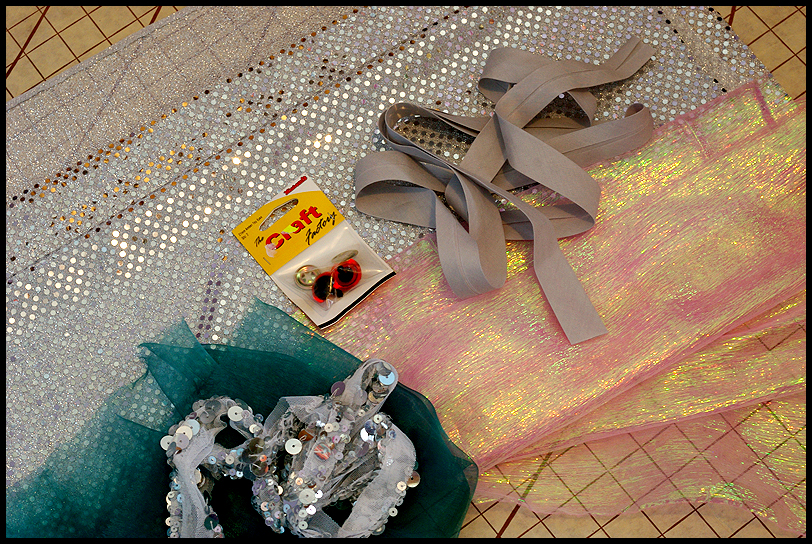 Last Saturday me & Tukru decided to go to a party on a boat at the last minute. I saw that a friend of mine, Rob Bidder, who I hadn’t seen in person for a looong time, was doing some music at the event, and it would be good to see him, and the party looked like fun anyway. Being on a boat, and near Hallowe’en, the dresscode was aquatic, so I had to come up with something to wear in an afternoon (and Tukru in even less time). Good old Costumes for Plays and Playing came to the rescue. A fish hood/cape with scales for me, and a button-on mermaid tail for Tukru.

I got some offcuts of fishy fabric, sequinned trim and some eyes from a local fabric shop. Total about £7. There’s 50cm of the sequinned stuff, and 25cm of the other stuff.

I cut a vague semi-circle of the silver fabric.

Then I cut rows of scallop-shapes of the gauzy fabric, and sewed them on. That gauzy stuff is a complete bugger to work with in small shapes. Then I sewed the sequin trim around the top edge, and the bias binding around the bottom edge, and then fixed the eyes on either side. I didn’t use the blue lace trim in the end. The whole effect was more glam-rock than I’d intended. I then wore my sailor dress and a silver lurex cardigan with it. I thought I had more photos of the costume actually on, but this is the only (not very good) photo of it.