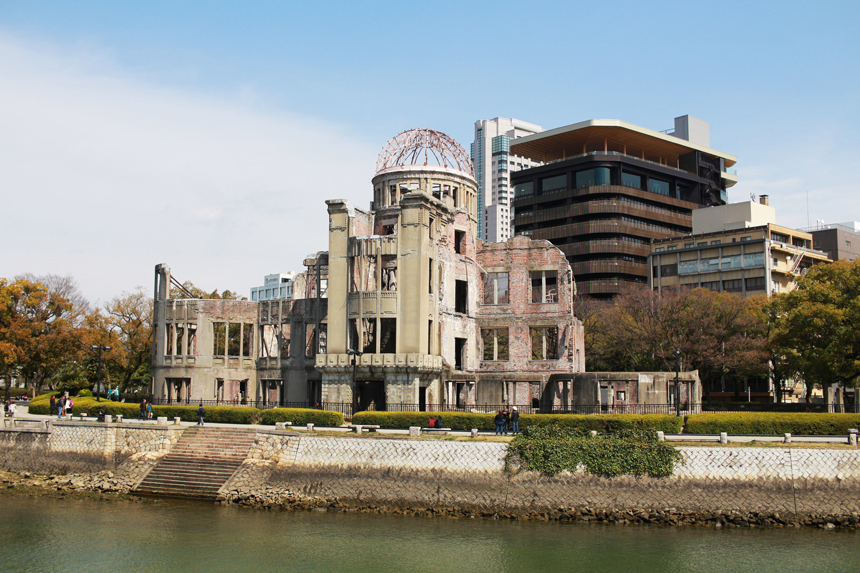 You can see more photos from Kyoto, Tokyo and other cities I visited in the Japan category, and also read about the trip in the zine I wrote.

One of our final stop-offs in Japan was Hiroshima. Hiroshima is most famous for being the first city (and so far 50% of all cities) to be nuclear bombed. Nearly everything in the city was destroyed, and at least 50% of the population died, with the survivors often suffering extreme health problems afterwards. Nearly all the buildings in the city are modern- the Atomic Dome pictured above was one of the few old buildings standing. Visiting Hiroshima has only increased my belief in nuclear disarmament. (And I’m for unilateral disarmament- something the UK government had the chance to do last year but didn’t, with choosing to renew the Trident missiles).

The castle is a modern replica of the original. The original one was blown up along with most of the other buildings in the city.

A memorial to victims in the Peace Park. I was disturbed however when I read through some guide books on the stall of a man offering tours. The English version barely mentioned the Second World War, framed it as being economically positive, and mildly referred to the actions of the Japanese Army in the war as “misconduct”. I think China, Korea, the Philippines and the various POWs in Japanese camps would have something strong to say about that (along with the governments still trying to wrangle an official apology). I also wonder what the Japanese and Chinese editions of the book on offer had to say. (There was also no Korean edition, which is strange for tourist things in Japan). It was especially jarring to see such an aggressive nationalist denial of people’s suffering inserted into a memorial dedicated to remembering war suffering and making sure it didn’t happen again.